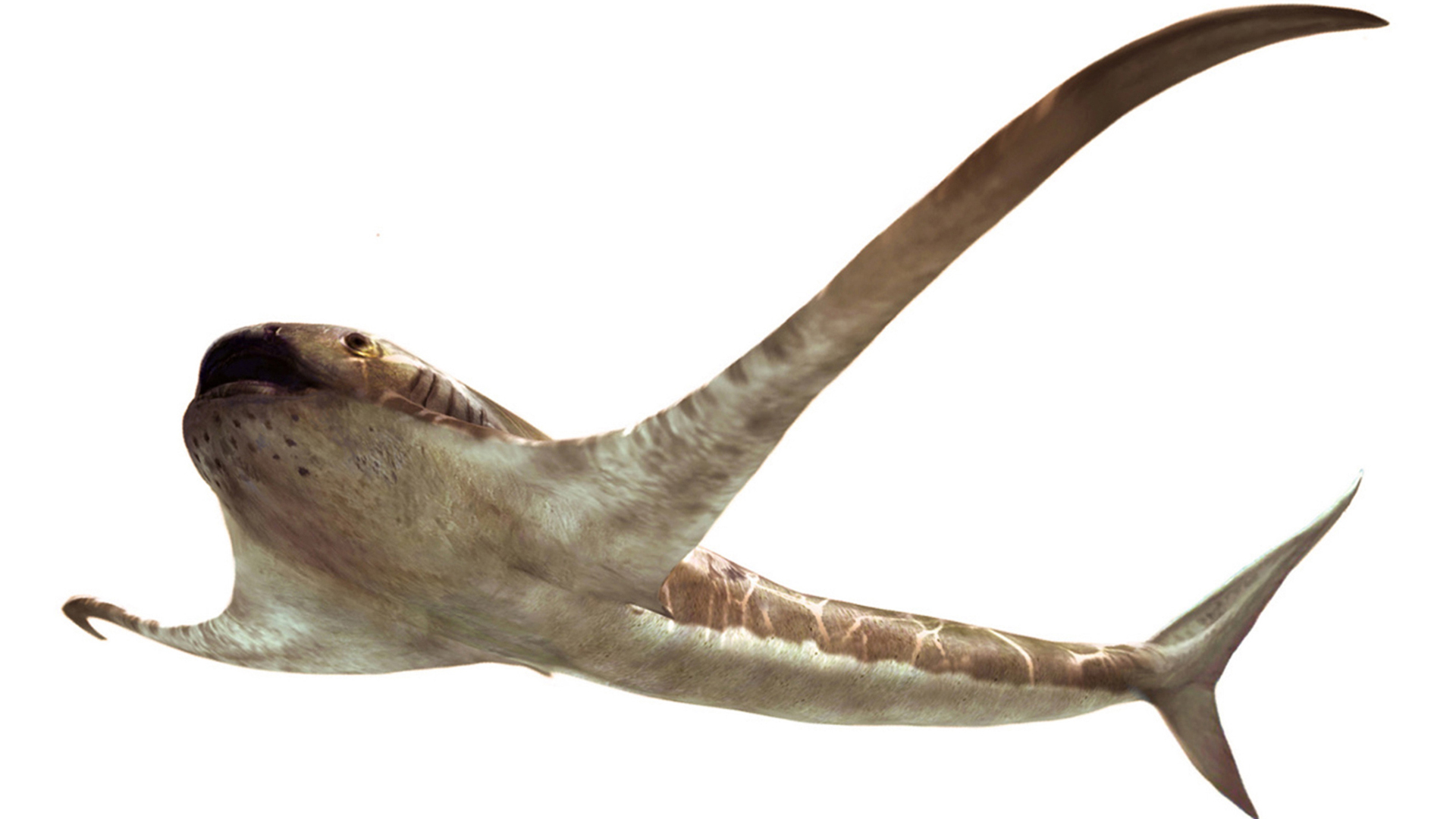 Reconstruction of the newly discovered fossil shark Aquilolamna milarcae found in the municipality of Vallecillo in Mexico. (Oscar Sanisidro . Newsflash)

MEXICO CITY — A team of European and Mexican paleontologists has discovered a prehistoric shark with wing-like fins dominating the oceans.

The 93-million-year-old eagle shark from the Cretaceous period was found in northeast Mexico and is believed to have feasted on plankton.

It is believed that the so-called ‘Eagle shark’ or Aquilolamna milarcae, which was six feet long and had a pectoral span of six feet and three inches, possessed huge wing-like pectoral fins, which enabled it to speed through the ocean.

“The physique of Aquilolamna milarcae is really extraordinary,” said Dr. Eberhard Frey of the State Museum of Natural History in Karlsruhe.

As per the words of Roman Vullo, a paleontologist at the State Museum of Natural History in Karlsruhe’s German city, the fossil was discovered in the municipality of Vallecillo in Mexico in 2012.

As no teeth remain have been found, researchers believe it belongs to the same family of sharks, including the mako and basking sharks. Its broad head and long wing-like fins suggest Aquilolamna milarcae was not a predator but more of a plankton lover.

“It is very likely the eagle shark was a plankton eater, similar to today’s whale sharks or manta rays,” said Professor Wolfgang Stinnesbeck from the University of Heidelberg.

“My first thoughts on seeing the fossil were that this unique morphology is totally new and unknown among sharks,” said Dr. Romain Vullo, a paleontologist from the University of Rennes in France and the study’s lead author.

Dr. Christina Ifrim, head of Jura Museum in the German town of Eichstatt, said the fossil was found in a limestone quarry in Mexico.

“This limestone is strikingly similar to the famous limestone slab in the Southern Franconian Alb foreland (Franconian Jura). It contains numerous fossils that provide a unique view of the living world in the open ocean 93 million years ago, including sea turtles, sharks, sea dinosaurs, and ammonites,” said Ifrim.

Cretaceous is defined as the period between 145.5 and 65.5 million years ago. The last period of the Mesozoic Era, following the Jurassic and ending with the extinction of the dinosaurs except for the birds. At the end of the Cretaceous Period, 65 million years ago, an asteroid hit Earth in the Yucatan Peninsula, Mexico, forming the Chicxulub impact crater. It has been estimated that half of the world’s species went extinct at about this time, but no accurate species count exists for all groups of organisms.