VIDEO: Holey Smoke: Stone Age Skull May Have Been One Of The World’s First Brain Surgery Patients

12,000-year-old man with a hole in his head could have been operated on to relieve a brain edema.
By Ana Lacasa March 22, 2021
Facebook
Twitter
Linkedin
Email 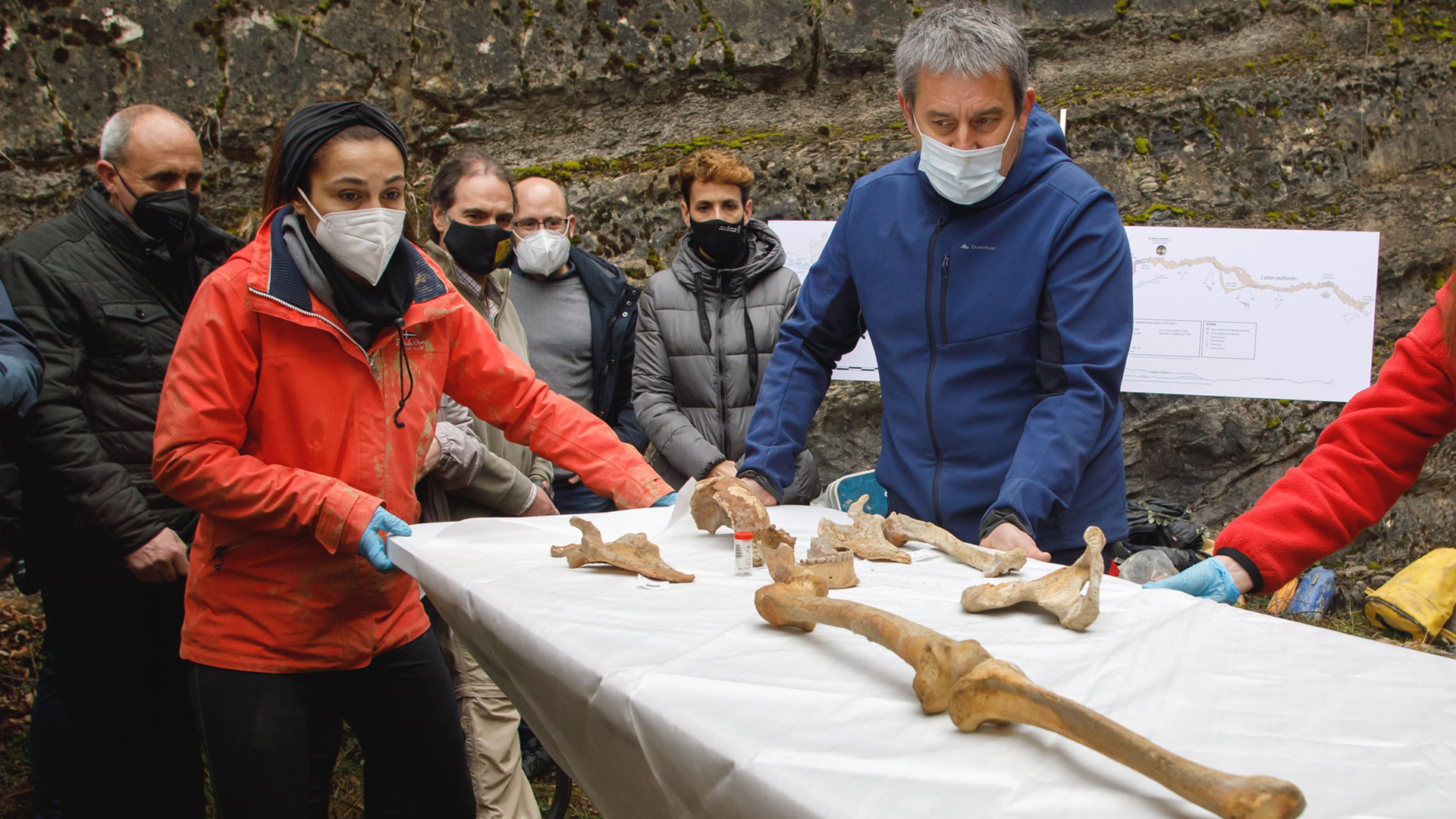 The remains of the man who was found in a cave known as Errotalde, in Navarra, Spain. (Gobierno Navarra/Real Press)

ERRO, Spain — The remains of the oldest human were found in the Spanish province of Navarra have left researchers and speleologists bewildered.

While some researchers, examining the 11,700-year-old remains found in a cave with a hole in his head, say a projectile could have punctured it, others attribute the spot to “prehistoric surgery” on the skull.

“The skull has a traumatism which could be compatible with several things,” said Jesus Garcia Gazolaz, an archeologist at the Registry, Movable Property and Archaeology Section of the Government of Navarra. “A projectile could have caused it, but it might not have happened during a violent event.”

A group of cave divers first found the well-preserved corpse in 2017. The speleologists, part of a cave diving group called Sakon, found him about 200 meters (656 feet) from the entrance of the Errotalde cave, located in the municipality of Erro.

Gazolaz explained that radiocarbon dating confirmed the age of the remains. The remains were found to be from around 9,700 BC. He said this “confirms the discovery to be exceptional,” as they are the oldest human remains ever seen in the region.

The 51-year-old Gazolaz also said that the remains dubbed as the “man from Loizu” (the Errotalde cave is also known as the Loizu natural spring) were found in a perfect state of preservation. However, the path to the remains was “tortuous, very narrow, and required crawling.”

As per the experts, the remains were of a young man aged between 17 and 21. The man was left in the cave on purpose in a particular position, with his face up and arms over his stomach. The mystery with the hole in the skull is yet to be unraveled.

As per the archeologists, “it could have something to do with a prehistoric surgery that was common among prehistoric people to alleviate pressure on the skull during an inflammatory process.”

A multidisciplinary team of archeologists, speleologists, anthropologists, geologists, and restoration experts, among others, from research centers all over Europe, will investigate remains to find out more about it, including the cause and means of death.

“What is clear is that this trauma fragmented the skull, and it was caused before death,” said Gazolaz. “But we need to know if this was also the cause of death, or if it happened shortly before or after the death.”

Research so far suggests the man was wrapped in a shroud and covered with red sediment.

“It would have been difficult to carry the body through all those galleries in the cave unwrapped,” he said. “So, the body was compressed, and the putrefaction process started after it was carried to the location where it was finally found.”

As per Gazolaz, “it does not seem to have been a standard ritual,” although it is unclear what took place during the burial rituals in the Mesolithic era, as not many remains were found.

In northwestern Europe, it began about 8,000 BCE and lasted until about 2,700 BCE. Elsewhere, the dates of the Mesolithic are somewhat different.

Researchers said this discovery was important as it can shed light on the lives of human beings in Western Europe at the end of the last Ice Age.

The remains are from 9,700 BC, a period of transition between the Pleistocene (started about 2 million years ago until around 10,000 BC) and the Holocene (the current geological era, which began in approximately 10,000 BC).

These people represent the last hunter-gatherers in the Navarra Pyrenees. Gazolaz explained that “this was a period of climate change when the planet’s surface changed, and other fauna appeared.”

He also said the living beings were “already Homo sapiens,” the same species as modern humans, and they “controlled fire.” Further, “they were already exploiting their environment more by hunting animals, fishing in rivers, etc.”

The surroundings of the cave will be investigated to find out if there was another entrance to the shelter.

The investigations are essential to ascertain the distance between the current entrance and the location of the body.