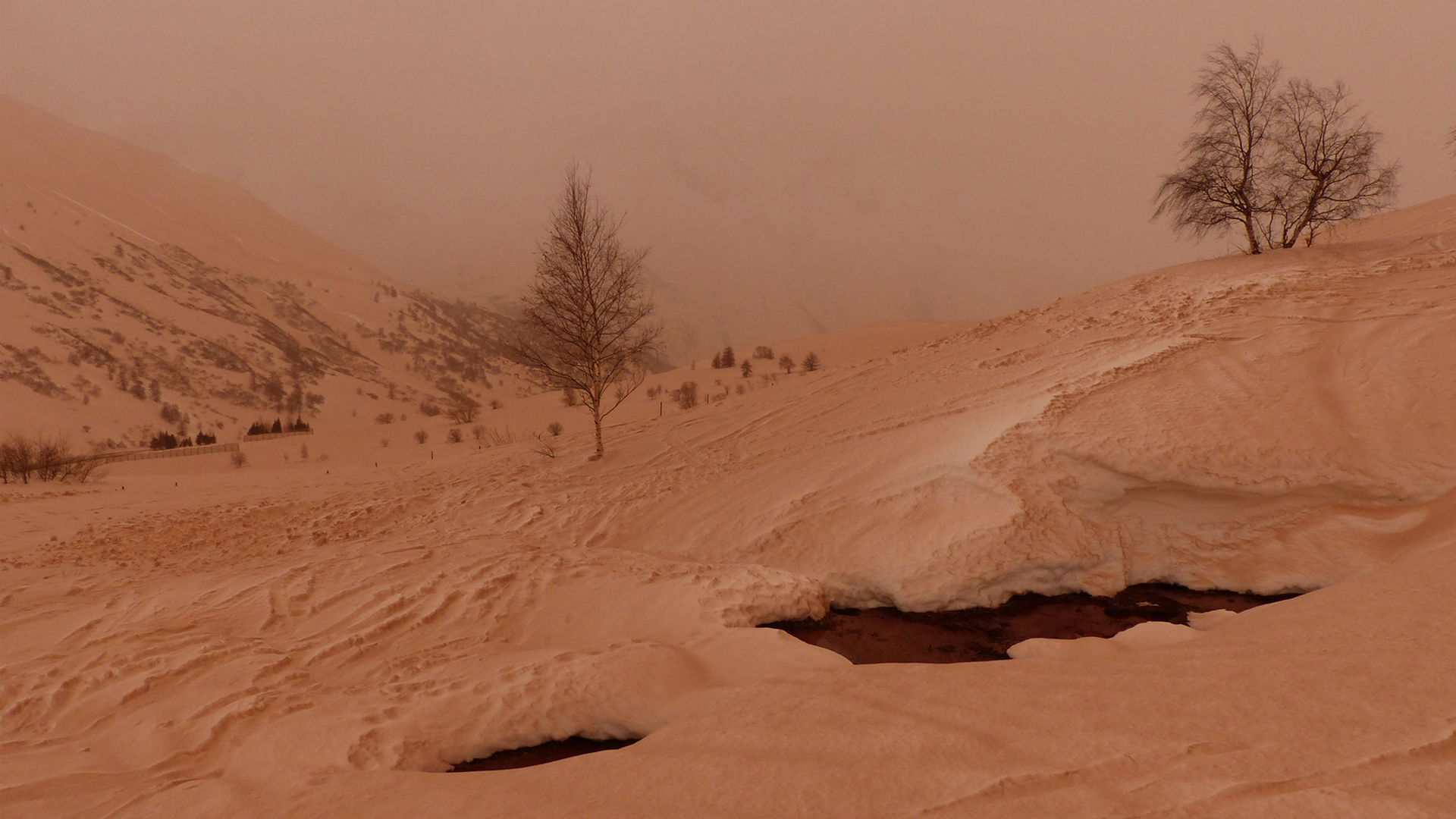 The Saharan sand at the Col du Lautaret, a high mountain pass in the Alpes in France, giving the landscape a red tint. (Snow Research Center-Marie Dumont/Real Press)

PYRÉNÉES-ATLANTIQUES, France — Tens of thousands of tons of sand from the Sahara Desert found to be radioactive have rained down on the Pyrenees and the Alps in France and Switzerland, which has caused snow to melt.

The meteorological experts requested samples from the public to establish that tens of thousands of tons of the dust from the Sahara have fallen on the mountains.

“There was a storm above the Sahara Desert that ripped up huge quantities of dust that then landed in Europe. This happened due to a change in atmospheric pressure,” said Dr. Marie Drumont, the head of the National Snow Study Centre (Centre d’Etudes de la Neige; CEN).

She explained a need to conduct further studies to determine the full scale of the phenomenon and its total impact.

“While it does often occur annually, if a little later in the year, the scale of the phenomenon this year is “exceptional.” It occurred three times, each a few days apart, in February, leaving the experts to call on the public to send in samples for them to study,” said Dr. Drumont.

The researchers received about 150 samples of snow tainted with the Saharan dust in jam jars, plastic boxes, and anything else that people could find. Their initial analysis established that tens of thousands of tonnes of it rained down on the Pyrenees and the Alps.

At least two teams of researchers are investigating the phenomenon, the CEN, based in the French city of Grenoble, in the Isere department, in the south-east of the country, and the CESBIO (Centre d’Etudes Spatiales et de la Biosphere; the Centre for Space and Biosphere Studies) in the city of Toulouse, the capital of the Occitanie region in southern France.

The French Atomic and Alternative Energy Commission (CEA) are also on the case because radioactive materials have been found in the dust.

“We were expecting samples from their colleagues that contain trace amounts of the radioactive isotope Caesium-137. We were hoping to analyze the samples’ very soon,’” said Dr. Olivier Evrard, a researcher at CEA.

Caesium-137 is typically formed as a byproduct of the nuclear fission of uranium-235 and other isotopes, commonly found in nuclear weapons and nuclear reactors.

It is currently unclear why Caesium-137 has been detected in the dust samples. Still, it is known to be particularly prone to being picked up in the atmosphere and transported over extremely long distances. It also tends to be deposited on the ground as a result of radioactive fallout.

“According to our first calculations, tens of thousands of tons of dust fell on the mountains,” said Dr. Simon Gascoin, a CNRS (Centre National de la Recherché Scientifique; the National Centre for Scientific Research) researcher.

As per the researchers, one of the effects of the dust falling on the mountains is making the “snow melt faster.” “Because the layer of dust covering the mountains makes the ground heat up faster, and this has an impact on the snow,” said Dr. Drumont.

Dr. Drumont has been studying snow for years, saying that she became interested in the subject because she loves the mountains where she often skis, hikes, and does mountain climbing.

“I have been studying the subject for many years, but when we saw the somewhat exceptional scale of this phenomenon, we asked private individuals to send us samples,” she said.

“We received about 150 samples from the Pyrenees and the Alps, and we are in the process of analyzing them to determine the exact mass per square meter of the sand that landed on the mountains.”

However, she could not say whether there was a record amount that had fallen this year because they are still crunching the numbers, but she did confirm that the phenomenon happened “much earlier this year” and that it was “very intense”.