VIDEO: Space Is Not Quite the Final Frontier for Elon Musk’s Quad-Amputee Astronaut

The French athlete is studying the language after SpaceX CEO Elon Musk promised to send him to space.
By Joe Golder March 22, 2021
Facebook
Twitter
Linkedin
Email 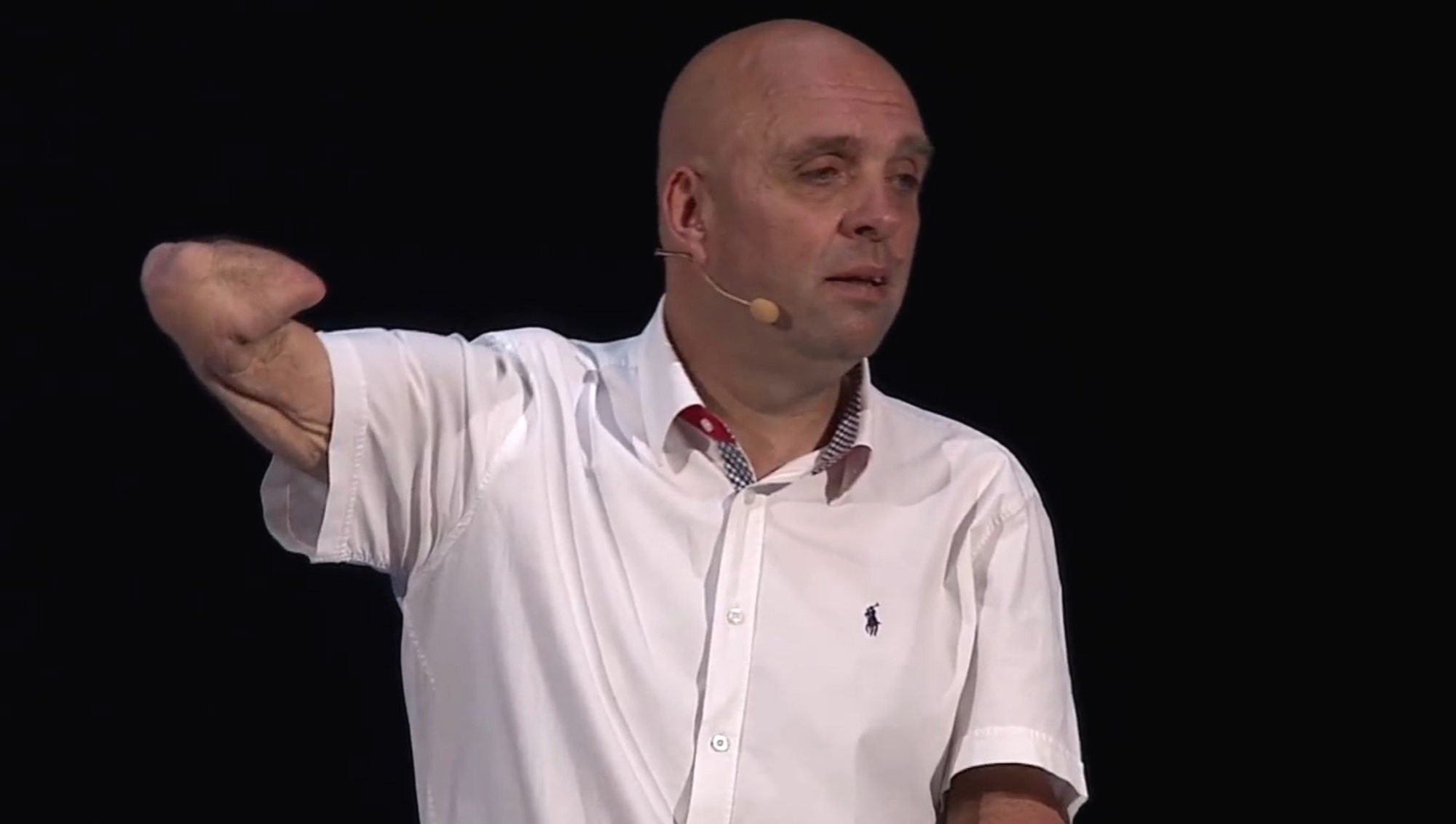 A French man with no arms or legs who has already swum the English Channel and conquered the world’s most grueling car race has a new goal: rocketing into space. Tesla entrepreneur and SpaceX CEO Elon Musk has agreed to send him into orbit. Now Philippe Croizon is learning to speak English, so he can communicate with his crew and ground control.

The English language may be as hard for Croizon as many of the grueling physical feats he has previously mastered: swimming across the straits that connect five continents, setting a world record for sea diving without scuba gear, and completing the dangerous Dakar Rally across deserts and mountains in Paraguay, Bolivia and Argentina. Since he couldn’t touch the steering wheel or pedals of a typical off-road vehicle, he designed his own modified buggy with a hydraulic joystick.

He is not special, he said, “just determined.” Croizon just finished his first English-language lesson. His first test will come in October, he said, “when I’m going to Cape Canaveral.” Virtually all non-military U.S. spacecraft thunder into space from the Kennedy Space Center at Cape Canaveral, Florida.

“I at least want to be able to make myself understood and understand other people,” he said in French. “I’ll have an interpreter with me just to be sure that I understand everything. But yes, that is why I am taking English lessons.”

After completing the five continents swim challenge, he was repeatedly asked by his fans and the press, “Where next?” He usually answered with the moon’s “Sea of Tranquility “— the sandy crater where Neil Armstrong and Buzz Aldrin landed in July 1969. He said he was joking, but a series of social media communications soon pointed him toward outer space.

He emailed Richard Branson, founder of Virgin Galactic, Virgin Orbit and The Spaceship Company, but got no reply. Then he reached out to Musk. Google Translate helped him put his message in English: “Hello… I am a famous French adventurer without arms or legs! Send me into space to show once again that anything is possible!”

“So I sent that,” he said. “And I’m not thinking for a second that Elon Musk is actually going to reply. The dude at the time had over 40 million [Twitter] followers. He has bigger fish to fry than dealing with Philippe Croizon. But two hours later, I see a reply from Elon Musk. … So I’m like, ‘Wow! This is crazy!’ And I’m the kind of guy who never chickens out.”

Croizon, who does not like the term “handicapped,” said he has long wanted to travel “to this great unknown, and beyond. Thanks, Buzz Lightyear.”

He tweeted that his “DMs” — Twitter’s person-to-person “direct messages”— were unlocked so anyone could chat with him in real time.

Musk put him in touch with Jared Isaacman, a fellow billionaire who was working on details for the flight. Isaacman told him to expect a two-to-three-day Earth orbit.

“And Jared sends me a message saying ‘Hello Philippe, it’s Jared, I’m going to be the first pilot, and I’m going to take three tourists with me and I would be very happy to meet you because what you have accomplished is crazy. You inspire millions of people and I want you by my side when I take off.’”

“Can you imagine? I had stars in my eyes!” said Croizon. “Just going to Cape Canaveral in October — because that’s been confirmed … that already makes me feel giddy like a kid.”

Speaking about the accident that cost him his arms and his legs, Croizon said he has nothing to lose in 2021 because “I died” in 1994. He said he received a 20,000-volt shock from a live electric power line while removing a TV antenna from his roof, and the electrocution set his body on fire.

“I had an aluminum ladder. I was harnessed to the chimney and had taken every security precaution. I had spotted a power line behind me, but I told myself that it was far enough away from me,” he said. “But unfortunately I was wrong.”

The power company sent two more jolts, thinking a tree branch was caught on the wire and a burst of electricity would dislodge it.

“The branch was me,” he said. “After the third impact, I was left lying on the line. And that’s when I started catching fire. A neighbor saw and heard the impacts and saw the incident, so he took a fire extinguisher and put on rubber boots and climbed up the ladder and put me out. Twice.”

Croizon spent two months in a coma. “When I woke up, I no longer had my arms or my legs, so I had to decide if I wanted to die or if I wanted to live,” he said. “So I decided to live for my two boys.” Jérémy and Grégory are adults now, and help their father promote his series of adventures. In 2019 they drove the Dakar Rally themselves.

“I wasn’t athletic at all. I didn’t know how to swim. I started training 10 years after my accident,” Philippe said. “When I woke up and decided to live for my kids, I asked a nurse to turn on the TV. That’s when I saw a young woman swimming across the English Channel, and in my head I told myself, ‘Why not me one day? Why wouldn’t I swim across the English Channel?’ And that goal stayed with me.”

The road was a long one. After a decade in front of the TV, depressed and suicidal, he chose to do something.

“It was a crazy thing. Picture me, overweight, having never been athletic in all my life. I was 40-years old and that’s when I started to do some sports. … And just as I did with Elon Musk, I sent messages. I tell people that I need a hand and I find a physical fitness trainer, a physiotherapist who used to work with the French football team, and so on and so forth.

Two years later, Croizon said, he had swum more than 2,400 miles. “I was doing 35 hours of swimming and six hours of muscle strengthening a week. For two years, all I did was sleep, swim, eat. Sleep, swim, eat.”

After he swam the English Channel, he set out to swim the aquatic dotted lines that connect five continents. His quest included crossing shark-infested Red Sea waters to link Asia with Africa, and swimming from Europe to Africa across the Strait of Gibraltar.

“We finished with the Bering Strait, which was the hardest. And that’s where I almost kicked the bucket because I had a serious case of hypothermia,” he said. “The emergency doctor saved my life. They threw me into a cold-water bath after we arrived at an Inuit place.”

Croizon completed the Dakar Rally, 9,300 miles over a two-week stretch, widely regarded as the toughest motorsport race on Earth. “With the engineers we built a car that can be piloted without touching the steering wheel [or] the pedals, using just a joystick. It was just like a videogame,” he said, “except that I wasn’t allowed to run people over.” He finished in 48th place out of 317 people who started the race.

He said proving that naysayers are wrong makes him happy: “You say it isn’t possible? OK. I’m going to prove you the opposite.” When his time comes, Croizon said, he wants to go without any regrets about lost opportunities or unfulfilled dreams.