Guatemala Venerates The Virgin Of The Rosary

It is said that her face changes color when the country faces different struggles.
By Vanessa Sam and Christian Valera Rebolledo March 22, 2021
Facebook
Twitter
Linkedin
Email 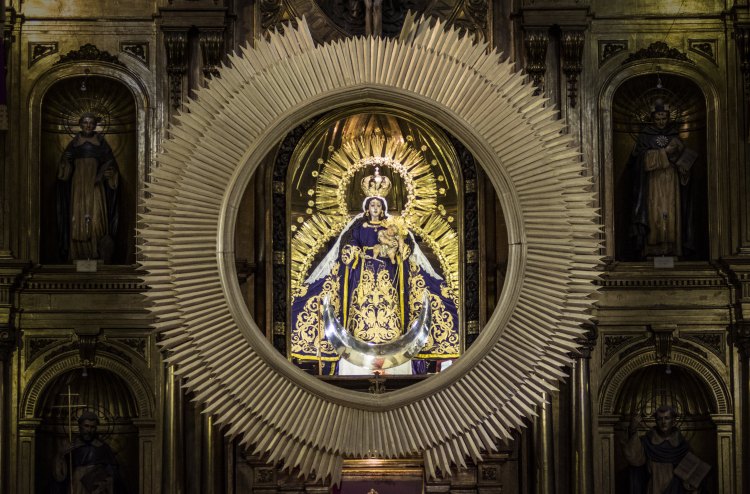 The Virgin of the Rosary is the patron saint of Guatemala. (Pablo Burmester / Unsplash)

The Virgin of the Rosary, Guatemala’s patron saint, is worshipped throughout the Central American country with great devotion.

“The vast majority of Guatemalans follow the Roman Catholic religion,” said William Juárez Marroquín, originally from Rabinal, in Baja Verapaz, Guatemala. “That is why it is not strange to find many devotees of the Virgin who follow the recitation of the rosary to the best of our ability.”

Nowadays, the Virgin of the Rosary is celebrated in Guatemala throughout October. However, the most important day is Oct. 7, as it commemorates the Battle of Lepanto in 1571 when the Spanish defeated the Ottoman Turks.

“We are devoted to her because, since we were little, our parents have instilled in us the Catholic faith. They have taught us that the Virgin of the Rosary is the most important symbol of our country, almost like the Mexican devotion to the Virgin of Guadalupe,” said Juárez Marroquín.

She is always represented with a beautiful pale face, which is said to become slightly pink when conflict or misfortune arises in the country.

The original image made in her honor was moved to the Basilica of Santo Domingo de Guzmán in Nueva Guatemala, where it has remained to this day. She receives constant prayers from the devotees who ask for an end to misfortunes, such as the earthquakes that have hit the country.

The Basilica was built in a neoclassical style with Baroque influence and was blessed in 1808 in a ceremony authorized by Pope Pius XI.

The Virgin’s coronation took place in the main square, in front of the Basilica she now rests in. It was held outdoors, as the vast number of devotees that day made it impossible to accommodate the event inside any building.

She represents hope for many Guatemalans who embark on pilgrimages to see her.

“It is something almost any Guatemalan does at least once, either on her day or any day of the year,” said the Guatemalan Araceli Chen Xitumul. “We always have thanked her for all her support as she takes care of us, even now during the pandemic. Despite that, we cannot [go on] pilgrimage at the moment.”

The crown that the Virgin wears on her head was the work of a goldsmith who used more than 121 emeralds, 44 diamonds, 80 pearls, and a gold rose, among other gems.

Chen Xitumul considers the Virgin a fundamental part of the Guatemalan identity: “I always keep her in my mind and, of course, I recite the rosary with my family during the struggles I go through.”