While Tackling A Tough Upbringing, Jay Bromley Reached Goal Of Playing In The NFL

The native of Queens, N.Y., and current free agent is grateful for football and the life it has given him. 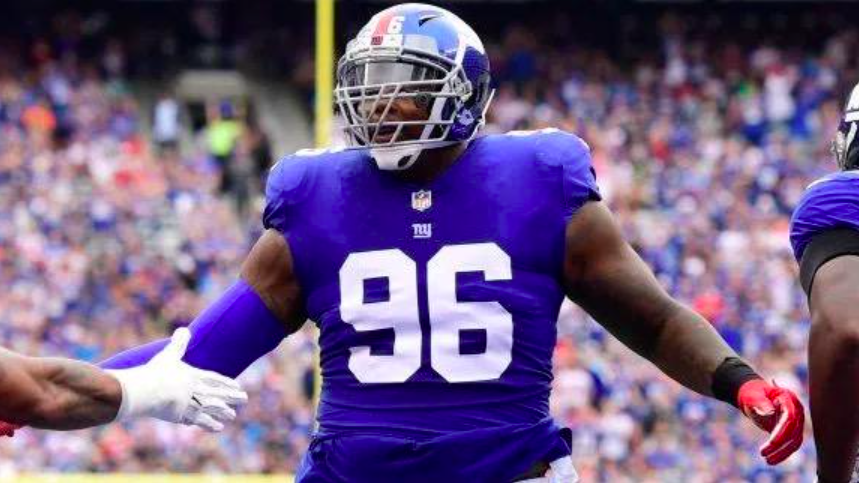 Jay Bromley had no choice but to play the hand he was dealt. Unfortunately for him, that hand consisted of a mother who was a prostitute strung out on drugs, and a father who was a pimp, eventually convicted of murdering one of his prostitutes and serving 17 years in prison.

Despite these unfortunate circumstances, Bromley used football not only as a coping mechanism for his parents’ reckless behavior, but as a way out of Southside Jamaica, Queens, in New York, where he witnessed things at a young age that most adults haven’t endured.

On the bright side, he had an aunt, uncle and grandmother who cared for him as if they were his parents. He wasn’t destined for greatness but driven to be better than his circumstances. That drive landed him a scholarship to Syracuse University and eventually led to the New York Giants selecting him in the third round of the 2014 NFL Draft.

Bromley would play for the Giants, New Orleans Saints, San Francisco 49ers and for the XFL’s DC Defenders. Circumstances can be defied when drive meets will, and opportunity is presented. Bromley is an exception to the rule, not the rule. Many don’t make it out of his situation, and regardless of whether he played his last snap of football or not, he knows he’s blessed to be where he is now.

Jay Bromley shares with Zenger News his hopes to inspire the future by sharing his story with the world.

Zenger: You have a hell of a story, and I appreciate you for being willing to share it with me. Let’s start with where are you from?

Bromley: Jamaica, Queens. Queens is the borough, and Jamaica is the city in New York City.

Zenger: Your parents had issues that led to them losing custody of you. What issues were your parents dealing with?

I was born to her. I was one of her middle children, and she only had me for about two or three months. My father tells me that I was taken away from her because she left me at a friend’s house for an extended period of time. The friend ended up calling my father, and he took me to my auntie, which is his sister. And she took me in, got full custody of me and became my mother from that day forward. My father went to prison a few months after that.

Zenger: He was convicted of murdering a prostitute who worked for him, correct?

Bromley: Yes! He did 17 years straight in prison. He didn’t come out of prison until my senior year of high school.

Zenger: Did you have a need or want to reconnect with your biological parents at any given point?

Bromley: My aunt and my uncle, that’s my heart, man. Those are the people that raised me. I was raised in a house with three older sisters. The oldest sister I have, me and her have the same biological father and different mothers. And then my other two sisters are the biological daughters of my aunt and my uncle. So, I was raised in a household with three older sisters. My auntie and my uncle became my mom and dad; and my grandmother served as a primary mother figure until she passed away until I was about 13.

Zenger: When did football become your escape or your therapy?

Bromley: I didn’t really know. &mldr; Growing up in New York, basketball is really the primary sport for the most part. I really just grew up playing basketball and ‘kill the man with the ball.’ Never [played] organized football until I got into high school. And then my freshman year of high school, this is right after my grandmother passed away, the summer prior. I decided to play football. I decided to give it a chance.

I’m a little chubby kid. Never really played organized football. I was about 6’0 at the time. Flushing High School had just brought the football team. I got on the team and I hated it. It was the hardest work ever. When I got tired, I sat down, so me going to that was a totally different experience. My grandmother pretty much raised me until she passed away in the same household. That was heavy on my heart.

I remember talking to my mom, probably the most memorable conversation we ever had. I went home after a practice; it was difficult, and I wanted to quit. I wanted to lay the quitting on the fact that I missed my grandmother. My mom told me something that was probably the best thing she ever told me. She said, “If you’re going to quit something, you quit because you wanna quit. You don’t quit because of an outside circumstance like losing your grandmother. That emotional aspect of it is pushing you to do it.” I went and cried and woke up the next day and never looked back from football.

Zenger: In a perfect world, how does Jay Bromley’s football journey end?

Bromley: This is a thought that I’m in now. I’m so much different; my life is so much different now than when I started playing the game. I was just talking to one of my friends. When you play this game, and you come from where we come from, I don’t want to go home so bad; I don’t want to go back to the hood so bad. Not that I’m afraid, but I just don’t think that’s it.

But I don’t want to go back so bad that I would rather die here, on this field, then go home. When you got that mentality — and I have literally had this thought process in my head when I’m conditioning or practicing — I’d rather it be here than to go back home and have to deal with whatever. Remember, Sean Bell got shot at 50 times around the corner from where I live.

I walked that block every single day to school. I walked that little alley block. So, I know what that environment is. I know you gotta be out there on your Ps and Qs. I also know there are good people there, some hard-working individuals there. But no matter where you go, there is always going to be the negative influences in all different shapes and sizes.

So, to answer how does it end perfectly? I’m so much different now. I didn’t have a wife; I didn’t have two children; I didn’t have so much depending on me. I think at a younger age, we overlook how football impacts us physically. And I think now, I literally had this conversation last night with a great friend of mine, and he helped me really think about this.

Football impacts you mentally and physically no matter what. Human beings weren’t designed to do it. So, you understand that there is a cost for you to put this work in. I played this game for 14, 15 years. There was a cost on my body that I paid to do it. Most kids don’t understand that. You don’t understand the cost that you’re paying until years down the line. A lot of people started playing at five or six; so the wear and tear on their bodies by the time they get the high school is phenomenal, especially from down there where you from.

Only the ones that come out of that and play on longer are the best athletes and the lucky ones. When I think about the cost of the game, that’s something that has to be contemplated. I have never been the best athlete. It’s funny; I just looked at my grades from the [NFL Scouting] Combine; they had me graded at a C. I have never been one of the top guys at my position. I always been around guys that woke up more athletic than me and was better than me. But guess what, I outperformed them all. Because it wasn’t this car that was given to me; it was the person sitting in the driver’s seat. Cause if I had your car, I’m a perennial All-Pro in your car (laughing). But the driver in your car didn’t get it done because the driver wasn’t sufficient.

So, it’s making a decision to sit down with God and say, “Is it more important for me to try and go make some more money and put my body and potentially my mind on the line?” Or is it best if I say, “Look man, I’ve invested five years in the NFL; I was drafted 74th overall, from Jamaica Queens, one scholarship, and then I’ve done all this?” That’s in stone. Through the grace of God, I got a lot of things that I invested in that the NFL slotted for me.

And I saved my money. And I can still play with my kids. My mind is well; my body is well. It’s like, are you going to think about yourself and making money, or the pride and glory to go back up and say, I did that again? Or is it to be content and go use my mind and work ethic, and labor to go become great at something else and be able to potentially stay around longer for my children? When you see the Louis Nix story and Vincent Jackson, everything can seem normal until it’s not. And when it’s not, it’s tragic. What are you willing to give up for the game? If me and my wife are sitting in a $30 million house, but I can’t function, it’s pointless.

Zenger: Thank you for sharing this story. I appreciate your time. Is there anything else you want to add?

Bromley: I’m just grateful, man. Thank you, Percy. Thanks for being interested in my story, and I pray that anybody that reads it &mldr; I know you will put it in such a way that it touches people. God is the foundation in my life. And it didn’t really come to this until the last four or five years, but it’s purpose. If my purpose is wrapped up in football, I’m worthless. This game is always going to be taken away from me before I want it to go. When I lose that purpose, that’s why a lot of guys ultimately lose their mind so to speak. Because it’s like, what am I? I’ve been a football player my whole life; so what happens when that tag is no longer there, or they add the ‘former’ in front of it?

I’ve always been Jayson, but Jayson has to identify what other talents God gave him. God is expecting a return in the talents that He has given me. He didn’t just give me a big 6-4, 300-pound athletic body. He gave me a mind; he gave me a conscience; he gave me a heart, the ability to speak, a lot of things that are more important than monetary gain.

That doesn’t mean &mldr; make as much money as you can, but always understand the cost. It’s not he who works the hardest that is successful; it’s he who sacrifices the most. A lot of people in them big houses, they don’t even know their kids. They gave up the opportunity to love them and be around so that they can live better lives. You gotta ask yourself at some point, was it worth it?