Popcorn With Zenger: Zack Snyder’s ‘Justice League’ Is Worth The Wait 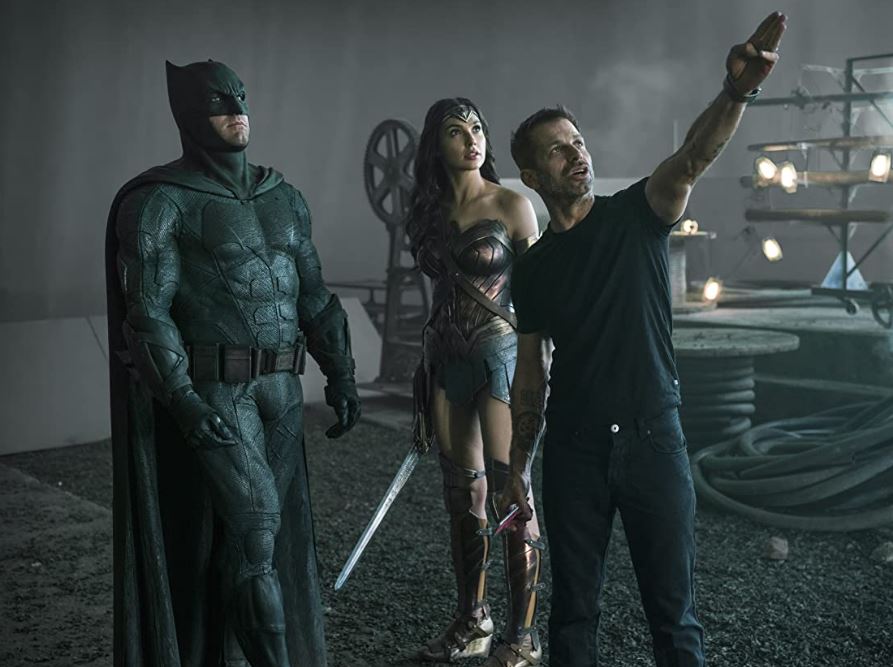 Director Zack Snyder, right, with Ben Affleck (Batman) and Gal Godot (Wonder Woman). Snyder had to leave before the 2017 film “Justice League” was finished, and a new cut that reflects his original vision has been released on HBO Max. (HBO Max)

The road to Zack Snyder’s “Justice League” is unlike any other in cinematic history.

In 2017, Snyder was the original director for the Warner Bros. superhero team-up film “Justice League,” but he stepped down during post-production following the death of his daughter, Autumn Snyder. With an unfinished film nearing the studio’s release date, director Joss Whedon was brought in.

The film underwent two months of re-shoots that significantly altered Snyder’s original vision. The resulting film was released to largely negative reviews and Warner Bros. took a loss of nearly $60 million on the project

Many fans blamed Whedon for the failures of the movie. As the years passed, an online fandom became more vocal in calling on Warner Bros. to release Snyder’s original vision of “Justice League.” YouTubers such as Tyrone Magnus, Geeks and Gamers, and Film Gob led an online charge for the release of what became known as “The Snyder Cut.”

Despite what felt like a feeble effort to get a major studio to recut and release a past film, actors including Jason Momoa and Ray Fisher lent their support. Then, in February 2020, Warner Bros. announced they would release Snyder’s “Justice League” in a move that was viewed as a major victory for fans of the DC Extended Universe.

Snyder was able to get Ben Affleck, Henry Cavill, Ray Fisher, and others to return for additional shoots. The project wrapped in late 2020, and the Snyder Cut was released exclusively on the Warner Bros. streaming service HBO Max.

After years of online campaigning and additional re-shoots, the nearly 4-hour “Justice League” is ready for public view, but was it worth the wait?

The plot remains the same from the 2017 film. Following the death of Superman, crime has spiked around the world. Even worse, an army of Parademons are attacking, led by Steppenwolf, who has returned to Earth to claim the Mother Boxes and resurrect the being known as Darkseid.

Bruce Wayne must speed up his plan to bring together a team of heroes to protect Earth, including three new heroes: Aquaman, Flash and Cyborg. With time running out, Batman and Wonder Woman lead their new team in the fight to stop Steppenwolf.

For those who have seen the 2017 film, there is no question that Snyder’s vision is a tenfold improvement over the original. Snyder’s version emphasizes character development and backstory that was left on the cutting room floor nearly four years ago. One of the biggest challenges the original film faced was introducing three new superheroes and a villain into the universe within its 120-minute runtime.

Having to cut so much from the film, audiences never connected with characters such as Cyborg (Fisher) and The Flash (Ezra Miller). Snyder’s “Justice League” not only solves all of those problems, it takes the marginal character Cyborg and makes him crucial to the movie. With all the original footage intact, audiences will completely change their view of the characters.

Wonder Woman who recently had a very poor showing in “Wonder Woman 1984,” returns to the form that DC fans fell in love with early in the series. The villain Steppenwolf goes from a cookie-cutter stand-in to menacing as his character design and feats are redone entirely, raising the stakes and making the story worthy of a superhero mashup.

The Snyder Cut is a massive character rehab that feels like an entirely new film, despite only adding 5–6 minutes of new footage. But the film’s improvements also expose the flaws in the original. With a runtime of almost four hours, the Snyder Cut is a chore to sit through.

The length exposes the problem Warner Bros. had editing the movie. Back in 2017, the studio said they wanted the runtime to be under two hours due to complaints that previous Snyder films were too long. The Snyder Cut would have never seen a theatrical release under normal circumstances. Snyder’s biggest problem continues to be not being able to tell his story in a time frame that doesn’t test audience patience.

The Snyder Cut also sets up major angles that we now know will not happen. As of this writing, Ben Affleck is out as Batman, Henry Cavill is unlikely to return, and the status of Ray Fisher and Ezra Miller solo movies are uncertain. If Snyder doesn’t regain control of the DC Extended Universe, the Snyder Cut is a swan song for what could have been.

The Takeaway: This redo is well worth the wait. If you’ve been hoping for over four years to see the true vision of DC’s mighty heroes, the film delivers. For normal audiences, patience will be a virtue for the 242-minute time investment.

See or Skip: The Snyder Cut was a long-fought journey, but the destination makes the battle worth it.