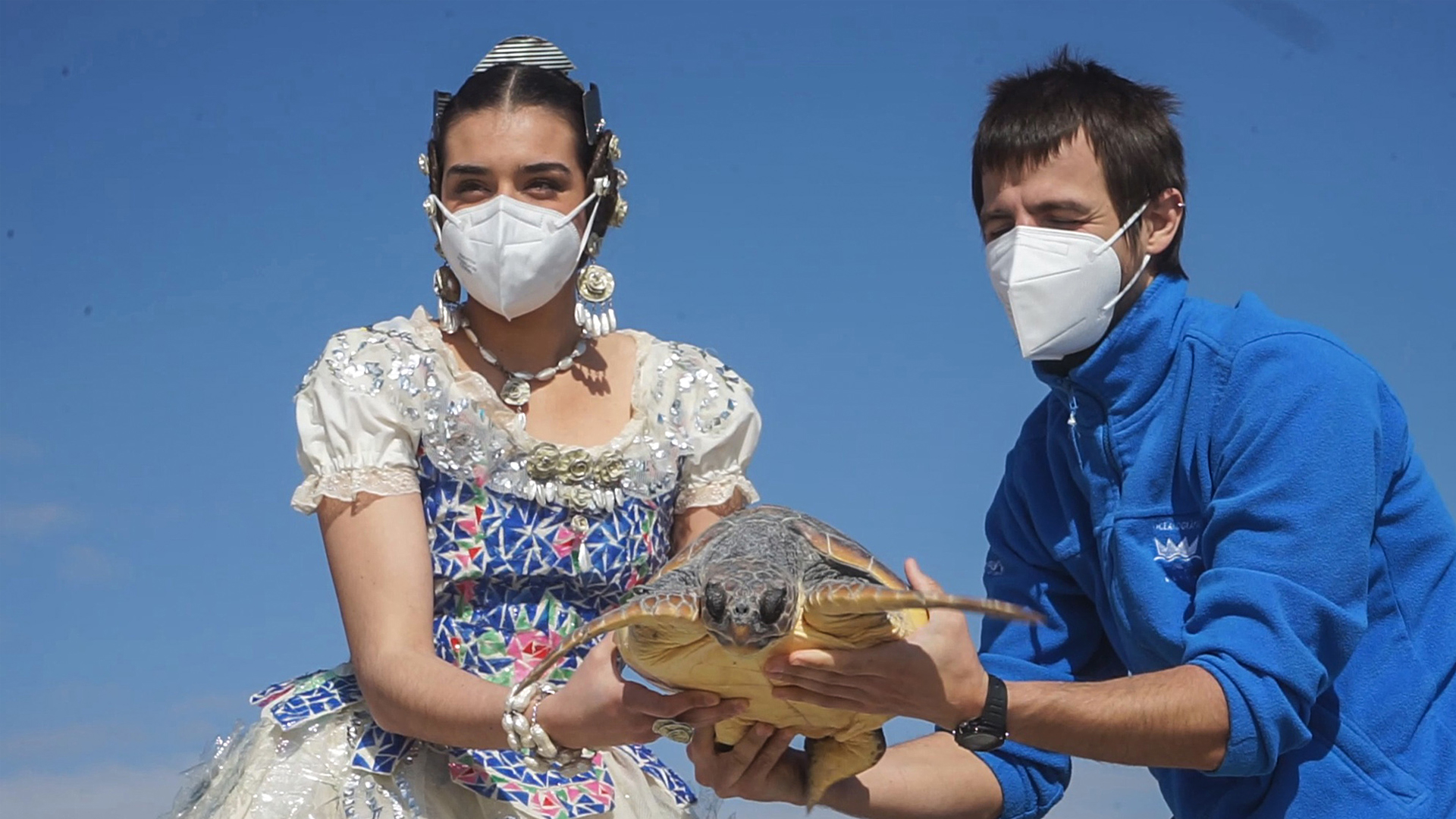 Mar LaFuente wearing the plastic-made dress while participating in the release of the turtle. (Oceanografic Valencia/ Real Press)

VALENCIA, Spain — Two endangered sea turtles were released in the sea in eastern Spain’s Valencia by a volunteer wearing a plastic dress to highlight pollution in the oceans.

The loggerhead sea turtles (Caretta caretta) were released on the La Garrofera Beach in El Saler, Valencia, under L’Oceanografic, an open-air oceanarium to the southeast of Valencia’s city center.

Mar LaFuente, the volunteer, was filmed releasing the reptiles while wearing a plastic dress in a “fallas” outfit. Las Fallas (The Falles in English) is one of Valencia’s most important festivals, but local authorities canceled it for a second time due to covid-19- related restrictions.

“Instead of using gold trim or precious stones, I used waste such as aluminum plates and plastic bottles,” said Rosa Montesa, 56, the artist who designed the plastic dress.

Montesa said the fallas spirit lived on thanks to the novel turtle release. She prepared the dress with her 92-year-old mother, who made the skirt and bodice for Montesa to decorate.

The foundation shared a video of turtles being released in the ocean on their Twitter handle. They wrote: “Coinciding with the big week of Valencia. From the Oceanogràfic Foundation, we have collaborated with the artist Rosa Montesa to raise awareness about the problem of plastic in the sea.”

Montesa said she wanted to “show that what others see as rubbish, she saw as treasures”.

She used the waste from 200 different colored bottles to make the flowers on the skirt and other parts of the traditional outfit. For the bodice, she created a mosaic with various plastics.

She painted sunflower seeds to make the model’s pearls, while her earrings were made with coffee pods.

However, the entire dress was not created with recyclable materials. Montesa also added accessories commonly associated with traditional fallas outfits.

The project took around three months to complete, and the most challenging part was “how to do the skirt,” said Montesa.

However, once she formed a clear image in her mind, she completed most of the project in six weeks, something she said felt like a “hobby.”

The dress symbolizes the problem of waste and single-use plastics in the oceans.

LaFuente released the two turtles into the sea after they were trapped in fishing nets and underwent treatment at L’Oceanografic. Local fishers found the struggling turtles and called the emergency services, which in turn called the foundation. 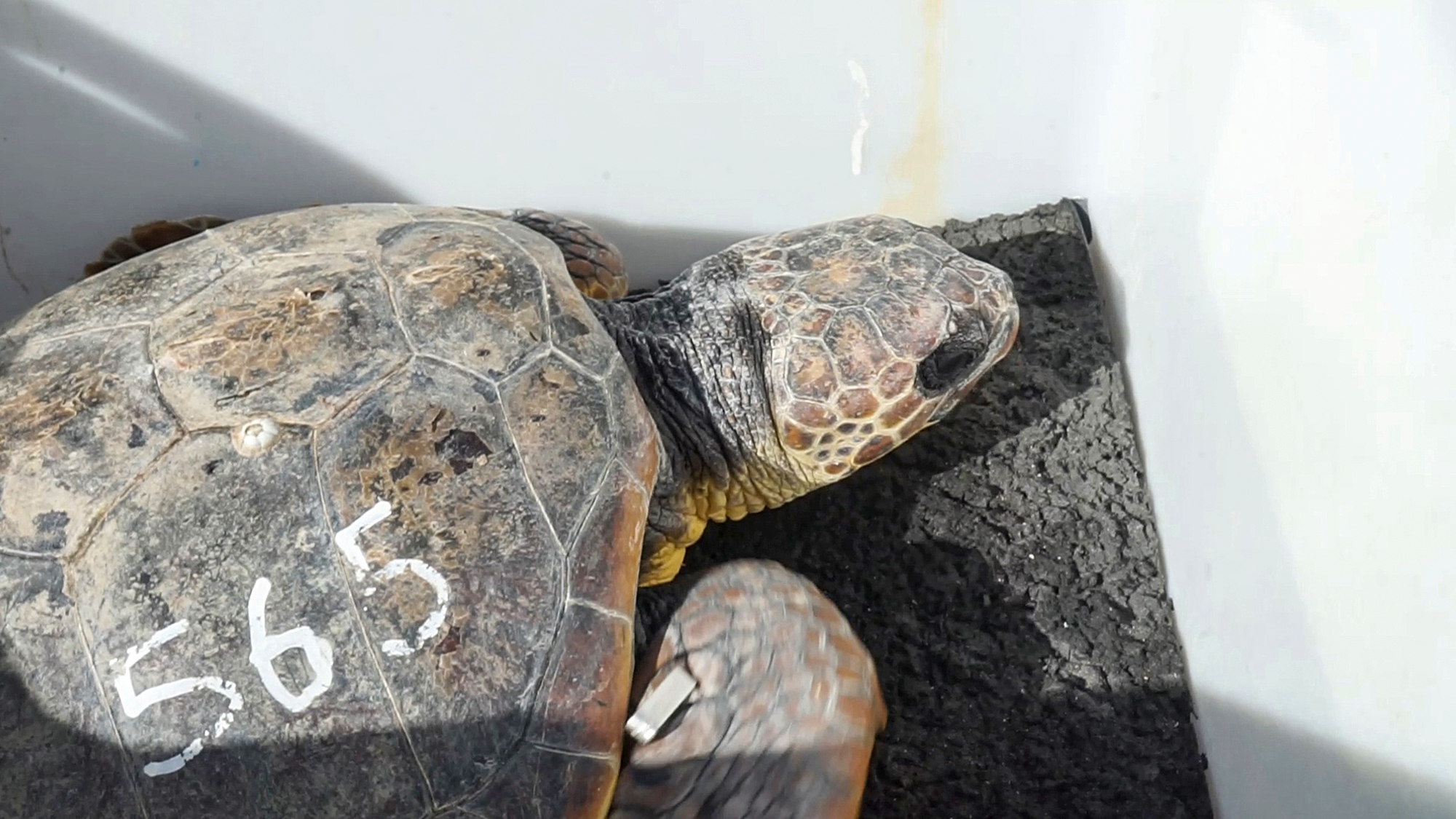 The turtle was rescued and released into the sea in Valencia, Spain. (Oceanografic Valencia/Real Press)

“They were both suffering from air embolism, and after a week in the chamber, they were ready to go back in the sea,” said Vicente Marco, the foundation’s vet.

Air embolisms, a blood vessel blockage caused by one or more bubbles of gas in the circulatory system, are a significant cause of problems for sea turtles.

Loggerhead sea turtles spend their whole life in the sea except when they return to the coast to lay eggs. The International Union for Conservation of Nature lists them as endangered species.

“The greatest threat to these species is the loss of nesting habitat due to coastal development, predation of nests, and human disturbances (such as coastal lighting and housing developments) that cause disorientation during the emergence of hatchlings,” states the Sea Turtle Conservancy. “Other major threats include incidental capture in long line fishing, shrimp trawling, and pollution. Incidental capture in fisheries played a significant role in the recent population decline.”