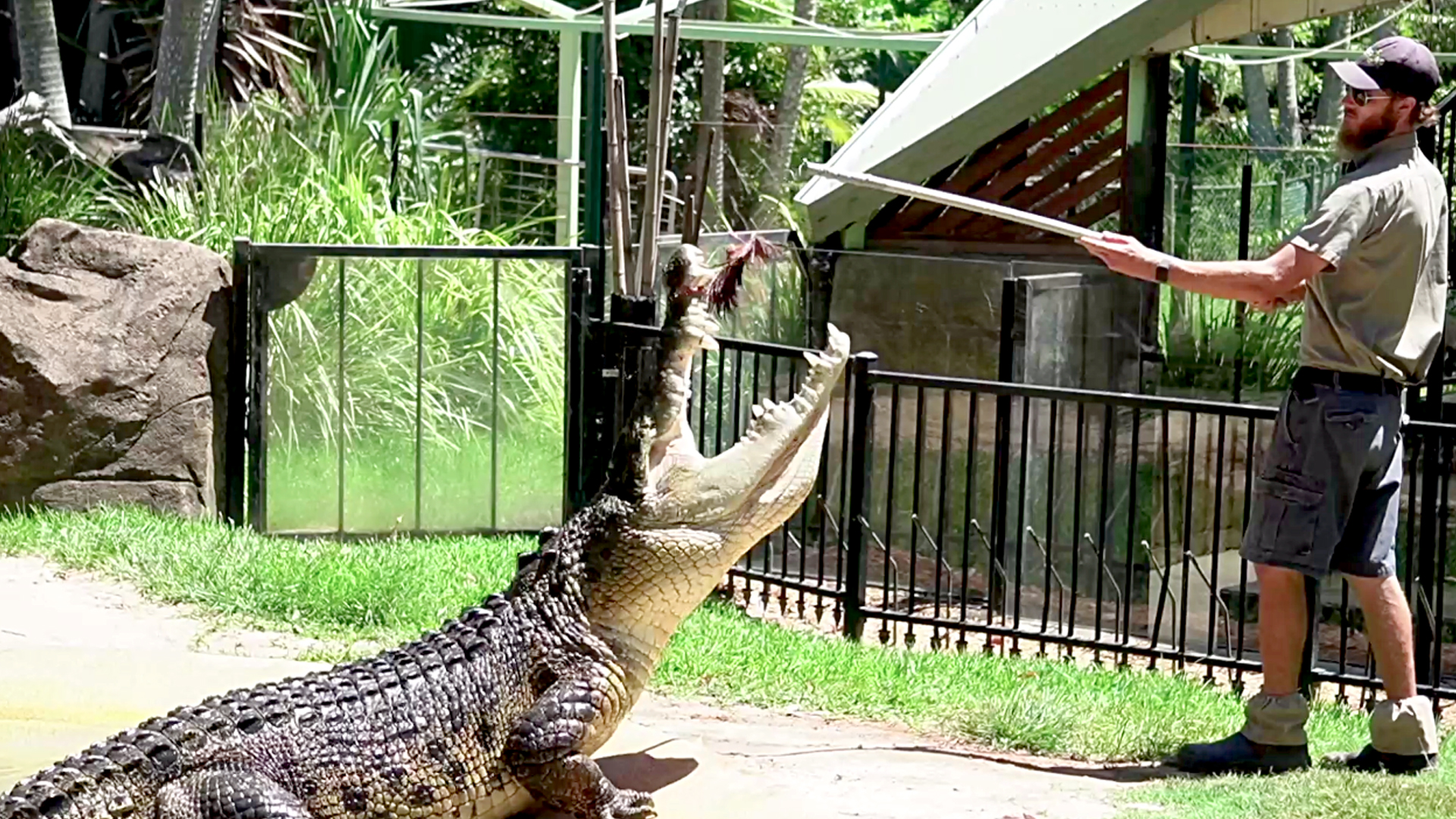 PORT MACQUARIE, Australia — A giant man-eating crocodile named Shrek was filmed leaping meters into the air to grab his meat meal at the Billabong Zoo, in Port Macquarie, in the Australian state of New South Wales, on March 16.

The zoo shared a video of Shrek on their Facebook page, writing, “Shrek, our monster croc, showing off his strength!”

In the video, the giant reptile enjoys the daily attention of animal-loving visitors who watch excitedly as the zookeeper lures him with a piece of delicious raw meat on a stick until he jumps up high and grabs the meal.

Within minutes of grabbing the meal, Shrek devours it between his sharp teeth.

Shrek is a Saltwater (or Estuarine) crocodile (Crocodylus porosus). It is the most prominent species of crocodiles and one of the largest reptiles in the world. It’s size and strength put it on the list with other mighty reptiles such as the Reticulated Python or the Komodo Dragon.

Adult males typically grow anywhere from four to five meters long (13 to 16 feet) and weigh more than 450 kilograms (992 pounds), while females are smaller and generally grow to around three meters (9 feet) long and reach a weight of up to 150 kilograms (330 pounds).

Their upper body is black, with irregular mottling and whitish on the underside. Saltwater crocodiles have around 70 teeth and the most extraordinary bite pressure for any living animal.

These animals are dangerous to humans and other animals.

“Saltwater crocodiles of this size are capable of eating just about any animal that strays too close and is particularly adept at drowning terrestrial creatures like birds and mammals,” as per Oceana, an organization that works exclusively to protect and restore the oceans on a global scale.

“Named for its ability to survive in full salinity seawater, saltwater crocodiles typically live in brackish (low salinity) water near the coast,” notes the organization.

Typically, these crocodiles live in the Australian coastal waters, estuaries, lakes, inland swamps, and marshes. Their habitats are located in a wide range from Broome in West Australia through the Northern Territory to Townsville in Queensland and occasionally further south. They can also survive in freshwater.

They feed on various species, including mud crabs, birds, sea turtles, fish, flying foxes, dingoes, cats, dogs, pigs, buffalo, cattle, and horses. An incredible fact about this species is they can hold their breath underwater for 10-15 minutes.

Saltwater crocodiles like Shrek can live for 80 to 100 years. They mate and reproduce during the wet season from November to March. A female will lay up to 50 eggs in nests along riverbanks, incubating for about three months before hatching.

These crocodiles are under the “least concern” list on the International Union for Conservation of Nature Red List of Threatened Species since 1996.

Further, Saltwater crocodiles are different from the American crocodiles (Crocodylus acutus), a shy and reclusive species.

They live in coastal areas throughout the Caribbean and occur at the northern end of their range in south Florida.

“They live in brackish or saltwater areas and can be found in ponds, coves, and creeks in mangrove swamps,” as per the Florida Fish and Wildlife Conservation Commission. “They are occasionally encountered inland in freshwater areas of the southeast Florida coast due to the extensive canal system.”