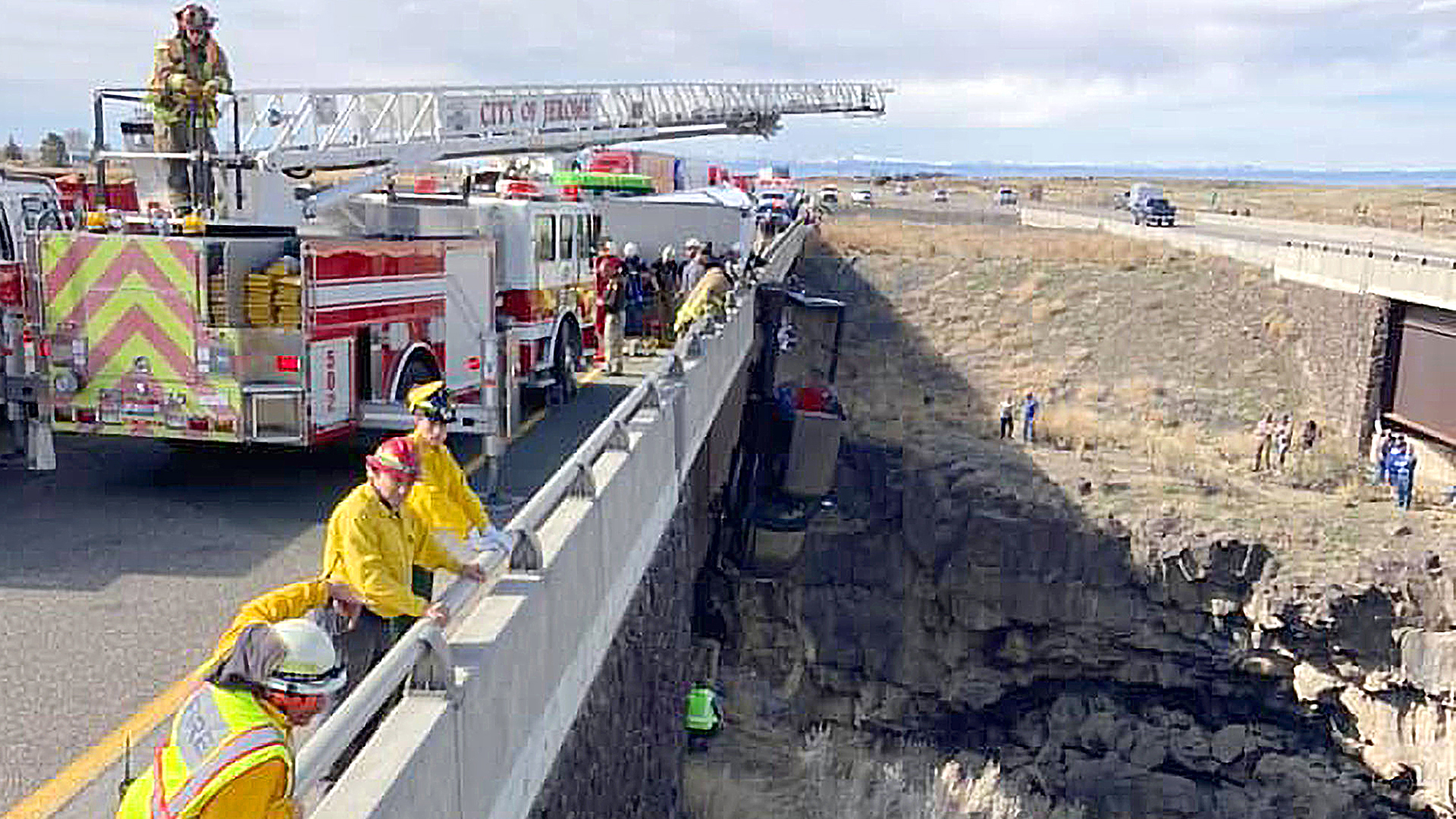 Firefighters working to rescue the people from the pickup truck that plunged off a bridge. (goodingfiredistrict/Clipzilla)

IDAHO, Ohio — US emergency crews rescued two people trapped inside a dangling pickup truck on a bridge spanning Malad Gorge in Idaho at around 2.45 PM on March 15.

The two people were prevented from falling off the bridge by the camper they were towing.

Idaho State Police spokeswoman Lynn Hightower said a local officer found a man and a woman inside the dangling truck, facing a fall of around 100 feet. At its deepest point, Malad Gorge has a depth of 250 feet.

“It was terrifying,” said Hightower. “It was definitely a heroic rescue from everybody that was out there, and thankfully, they’re all fine.”

As per the witnesses, the driver of the pickup, while pulling a 30-foot camp trailer, lost control. The truck and camper swerved and hit the barrier. Following the crash, both went left until the truck began sliding on the left guardrail. The truck then tipped over the bridge, and the camper blocked both eastbound lanes.

“A heroic effort by multiple emergency response agencies means both occupants of this pickup are safe,” tweeted Idaho State Police. “They’re en route to area hospitals with what appear to be non-life-threatening injuries. Safety chains to a camper initially kept the truck from falling into the gorge.”

The pickup truck was prevented from plummeting into the gorge by the security chains attached to the camper the couple was towing.

Soon as the news of the incident broke, a team of emergency responders arrived on the scene. It included specially trained rope rescue paramedics, the Magic Valley Paramedics, and the Special Operations Rescue Team.

Officers used another set of chains from a lorry at the scene to secure the 2004 Ford F-350 pickup until the emergency services arrived with cranes and other equipment.

The rescuers then rappelled down to the dangling truck and attached the 67-year-old man and 64-year-old woman to the harnesses.

According to the local authorities, both the occupants were sent to the nearby Magic Valley Hospital for a check-up. Neither sustained any significant injuries.

Hightower also informed that two dogs were saved in the truck and handed over to a relative in the area.

She said the investigation is still on to prove the incident.

“A rescue like this takes a lot of quick thinking and action, but this is what they train for,” Hightower said, praising the troopers. “The training just paid off today, and two people are alive because of the hours and hours of training these emergency responders to do.”

The Idaho State Police said the road would remain shut till the scene is cleared.

“Eastbound I-84 will remain closed for some time as the effort continues to clear the scene and ensure the highway is again safe. Idaho State Police thanks all the fast responding, quick thinking local rescue agencies who responded to the call for help,” it tweeted.

«Previous Post
VIDEO: Fall Of Duty: Hero’s Parade For Cop Who Died To Save Others From Horror Crash »Next Post
Newsom Recall Campaign Submits Far More Signatures Than Required To Get On The Ballot