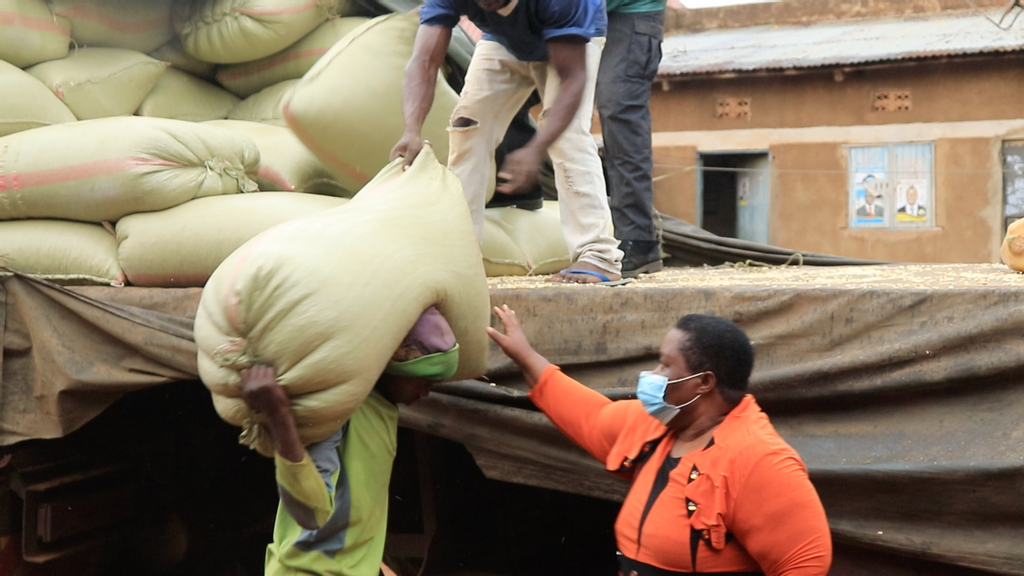 Maize trader Anne helps her staff unload the grain for drying at a yard in Uganda. (Kelvin Ogome)

MALABA, Kenya — Kenya is in a cross-border crisis with Uganda and Tanzania after banning maize imports from the two countries, allegedly because of high toxin levels in the grain.

The ban was reviewed and criticized during a virtual meeting of the East Africa Grain Council on March 9. The stakeholders stated that the ban “was not the appropriate solution to the aflatoxin problem. The blanket ban is counterproductive and has instead created a crisis in the region.”

Also, the ban comes as households in Kenya struggle with food shortages as a result of a lack of the staple grain, and smugglers are circumventing safety inspections.
The ban was initiated on March 5 by the Agriculture and Food Authority, which stated that maize imports from Tanzania and Uganda contain high levels of toxins. Since then, hundreds of maize truckers have been stranded at the border at Busia, Uganda.

East African Community states have called the move by Kenya hypocritical and political, and meant to destabilize the region.

Traders have been left shouldering the losses. The longer they stay at the border, the more they pay for parking, in addition to absorbing the cost of securing the maize (also known as corn in many parts of the world).

Maize trader Anne Wangui has incurred another cost: She has hired men to help her dry the maize at the border as she waits for the government to lift the ban.

Truck drivers are confused and disillusioned by the abrupt directive. Many claim that the government has cartels that are planning to import tons of maize after an artificial shortage, and that the ban is a move to drive small-scale traders out of business, paving the way for cartels.

“We cannot say who the cartels are,” said trader Michael Omondi. “We are just small-scale traders who should be allowed to deliver our maize to the market. If they allow us to cross the border with our maize, we will not go back to Uganda again.’’

Eustace Mwaura, whose 20 trucks, 40 feet long and full of maize, have been blocked at the Uganda border, said, “We have been doing this business for a long time. We have been transporting maize to Nairobi, Mombasa and other towns. We have never been told it is contaminated. We have the certificates confirming our maize is fit for consumption. Why are they blocking us now?”

Many of the traders have certificates of compliance and safety from Kenya’s Ministry of Health but are still blocked from driving their maize trucks into the country.

“Why can’t the government allow for our maize to cross and be tested for aflatoxin in Kenya?” said trader Martin Oyienga. “We have genuine certificates from the government of Kenya. We know the government is planning to block our maize so that cartels can release maize from the stores.’’

The Agriculture Ministry has stated that the importation restrictions won’t be lifted unless traders and farmers comply and deliver safe produce.

Agriculture Minister Peter Munya said the ban was not abrupt, as alleged by those in the maize- importation business. “We cannot restrict products from east African countries; it is a free market. But we have blocked unfit maize from entering Kenya. The notice was issued six months ago.”

The ban’s effect is already being felt in Nairobi and Mombasa, Kenya. In Nairobi, the price of maize has shot up and is expected to go even higher if the ban continues.  Kenya’s annual maize production is not enough to sustain its growing population and heavily depends on imports from neighboring states.

Kenya has recorded several cases of food poisoning and deaths since 2015 as a result of imported foods having high levels of mycotoxins, mainly aflatoxins and fumonisins. The contaminated food substances find their way into the Kenyan market through illegal importation or smuggling.

Even during the ban, some traders are using bicycles, commonly known as boda boda, to smuggle sacks of maize from Uganda to Kenya, escaping quality and safety compliance officers.