A giant hippo was recently rescued from one of the pits in eastern Cameroon.
By Nalova Akua March 19, 2021
Facebook
Twitter
Linkedin
Email 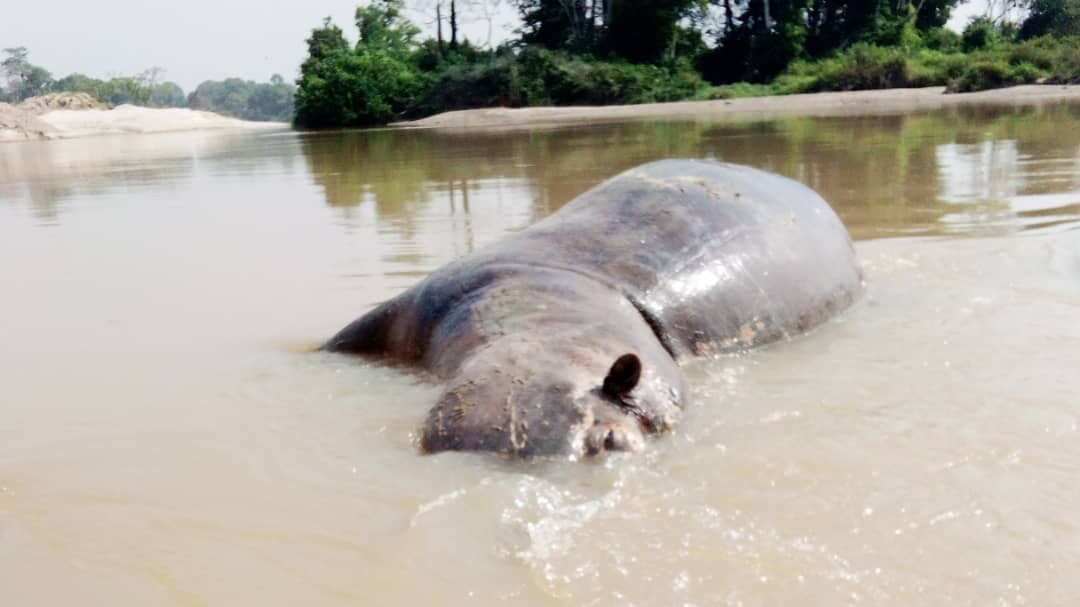 The carcass of a hippopotamus floats on the surface of the Kadéï River in eastern Cameroon in this undated photo. (Forests and Rural Development)

YAOUNDE, Cameroon — A giant hippopotamus has been rescued from an open gold mining pit in eastern Cameroon just months after the bodies of at least two others were discovered floating in a river near the same area.

The region is a major gold field, but the uncoordinated digging of this precious metal, mostly by foreign mining companies, has left the area peppered with countless open pits that have increasingly become death traps for both humans and animals.

“Within six months, two hippopotamuses have died in the Kadéï River,” said Justin Kamga, coordinator of mining watchdog Forests and Rural Development. “This water used to be clear, but now it is yellowish, making it difficult for the animals to identify. Mining activities in this river have made it so.”

The hippopotamus that was rescued is said to have left its habitat near the Kadéï River in search of food in nearby vegetation when it fell into the abandoned gold mining pit. As the animal struggled to get out, villagers alerted local authorities. After the muddy pit was partially filled in with the help of a bulldozer, the animal was able to find its way out. It had been trapped in the pit for nearly an hour.

“Gold mining in this area has destroyed the ecological habitat of these animals,” Kamga said. “Nearly 100 hippopotamuses used to live around the Kadéï River. But since the arrival of [the mining companies], just about 20 of them are left. If measures are not taken to protect this habitat, all the remaining hippopotamuses will die.”

Cameroon has seen an increase in the number of people who have died recently in gold mining pits that were left open by dozens of companies. Among the countries that have operations in major gold fields in the country are China, South Korea and South Africa.

More than 400 mining sites are said to have been dug open recently by foreign companies, according to the Forests and Rural Development association. The watchdog also reported that at least 115 people were buried alive by landfalls in these abandoned pits between 2017 and 2019. There have also been media reports of people drowning after stepping into abandoned mining holes.

A survey in 2019 by Publish What You Pay, a “campaign for an open and accountable extractive industry,” revealed that mining companies had left 248 open holes in one area of east Cameroon alone.

Eric Etoga, extractive industries program coordinator at World Dynamics of Young People, a Cameroonian civil society organization, told Zenger that the country is losing a lot due to noncompliance with environmental and social obligations of mining operators, citing a study by his organization.

“Out of a sample of 44 companies, only one had carried out an impact study,” he said.

“No company rehabilitates the sites after exploitation, leaving gaping holes everywhere, without any signage to at least prevent falls into those gaping and muddy holes that swallow human and animal life,” Etoga said. “The rivers are polluted; the water has become non-drinkable and the fish are dying. The rivers have been diverted from their beds.”

Officials of Cameroon’s Ministry of Mines, Industries and Technological Development did not respond to requests for comment.

Etoga said Cameroon needs to “enforce the application texts of the 2016 mining code” as well as “increase transparency in the process of awarding mining titles and contracts.”

“They [the mining companies] are banned from using toxic chemicals such as cyanide or mercury; from dumping waste into nature and backyards; they must restore the sites after the activity is completed,” Etoga said.

Cameroon is endowed with abundant natural resources including diamond, iron ore, bauxite and cobalt, in addition to gold. But the mining industry is still in its infancy, contributing less than one percent to the country’s economy.