VIDEO: First Rare Macaws Born In The Wild In 150 Years Learn To Fly

The pair marks the success of a rewilding program in Argentina.
By Ana Lacasa March 19, 2021
Facebook
Twitter
Linkedin
Email 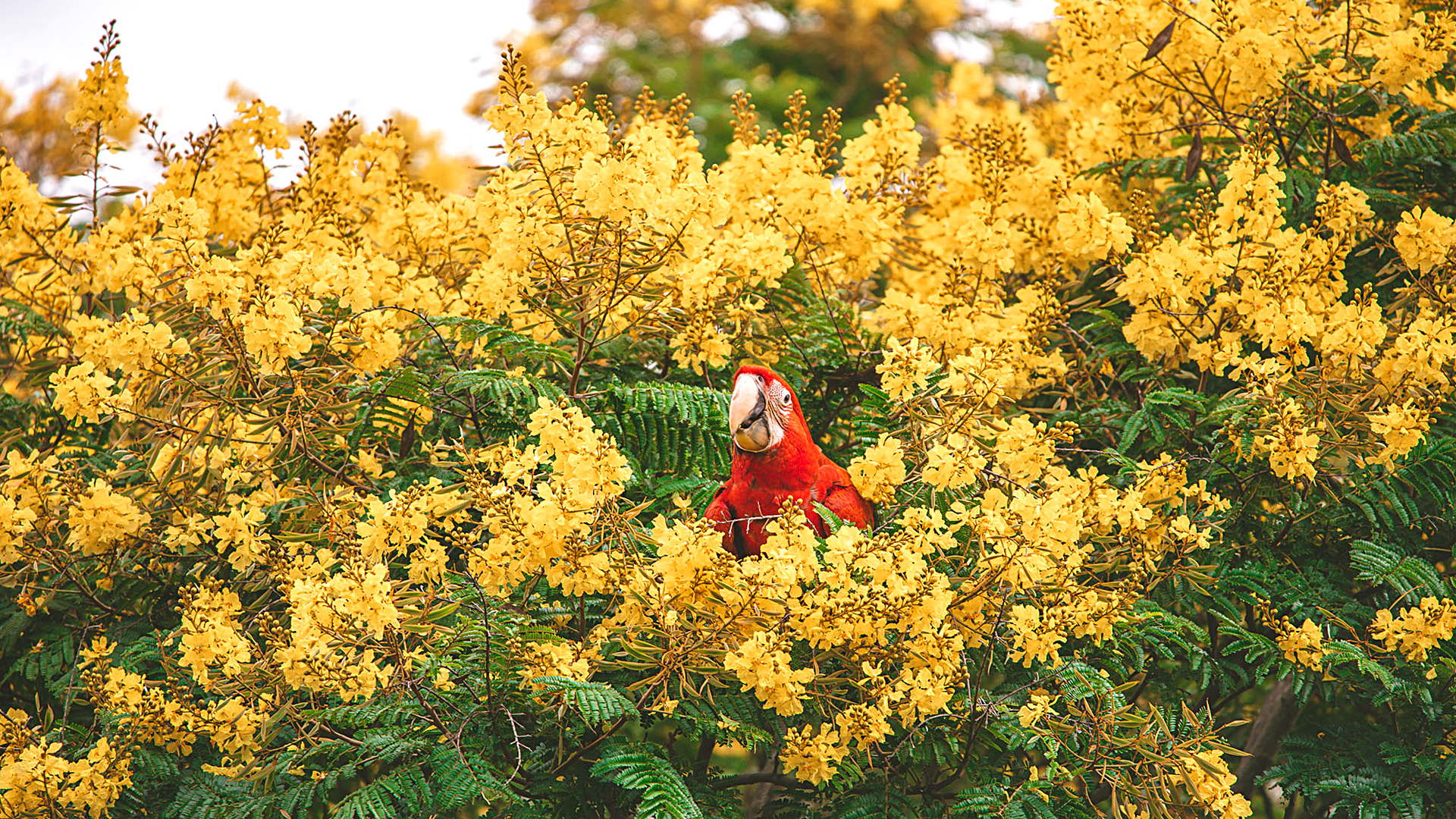 The red-and-green macaw on the top of an endemic tree in the natural reserve of Argentina. (Manuel Verrastro-F.Rewilding Argentina/Real Press)

CORRIENTES, Argentina — Rare young macaws, born for the first time in Argentina’s wilderness after they went extinct 150 years ago, are now learning to fly under the watchful eye of their parents.

Tuco and Pure are the daughters of a captive-born breeding pair that were released years ago, and the two have had previous failures since first trying in 2019.

“They were first-time parents in 2019,” said Talia Zamboni, a biologist from Rewilding Argentina informed. “But they did not have the experience, and sometimes those animals break their eggs, and the babies are not born.”

Regenerating macaw populations is one of the projects of Rewilding Argentina Foundation, operating since 2010 to reintroduce threatened species. The arrival of Tuco and Pure, who are now learning to fly, resulted from six years of hard work.

The new arrivals, who are now part of a pack of 20, are the first wild-born red-and-green macaw in 150 years in this part of Argentina. The mission to re-wild these macaws started in 2015 but only rewarded lately. The birth of this pair in October 2020 at a natural park in the Iberia Wetlands of Corrientes in northeast Argentina is a big success in the mission.

There are currently 19 of these species being helped by two different groups across the natural park.

But this new success has “filled us with joy,” said Zamboni. She and other team members have helped the birds feed their offspring and learn how to be good parents.

“When they are tiny, they are very delicate in terms of food ingestion, and they have to eat permanently to survive,” said Zamboni. “If they eat less, they could be at risk of dying. That is why the workers helped the parents. Although the idea is they learn the process, so they can do it themselves.”

The rewilders have suffered many disappointments in the lead-up to the birth of Tuco and Pure.

Now, the pair have started leaving their nesting box for 500-600 meters learning flights under the guidance of their father. The team is celebrating how the birds learn to land and move around the trees and branches.

“They started to venture outside the artificial nest after growing their first downy feathers,” said Marianela Masat, the lady responsible for the red-and-green macaw project at Rewilding Argentina.

She said the two hatchlings were born in a nest box built by the foundation workers in the natural reserve, which helped their parents protect and raise them.

“In late January, the fledglings started to fly under the watchful eye of their father.”

Experts expect the parents will keep feeding them for several weeks until they can fly proficiently by themselves.

The last known sighting of this species in the wild was in 1850.

“They disappeared because a lot of them were hunted keep as pets,” Zamboni said. “But they were also victims of feather trafficking.”

Deforestation of their natural habitat is another reason for their disappearance, she added.

Red-and-green macaws were once widespread in the forests of South America, but habitat loss and the illegal parrot trade led to a significant decline in their numbers. While listed as of “the least concern” by the IUCN’s Red List, the species is critically endangered in Argentina, where hunting, changes in land use, and the pet trade have dealt a blow to the population.

Tuco and Pure join 17 other macaws released after being taught to fly in a tunnel by the foundation’s experts. The birds were mainly taken from zoos and breeding programs.

The macaws play an essential role in the local ecosystem by spreading seeds from big fruits, which helps regenerate the forest. They are a favorite of nature lovers and bird spotters due to their colorful plumage. “And,” she adds. “They also help local communities through tourism.”