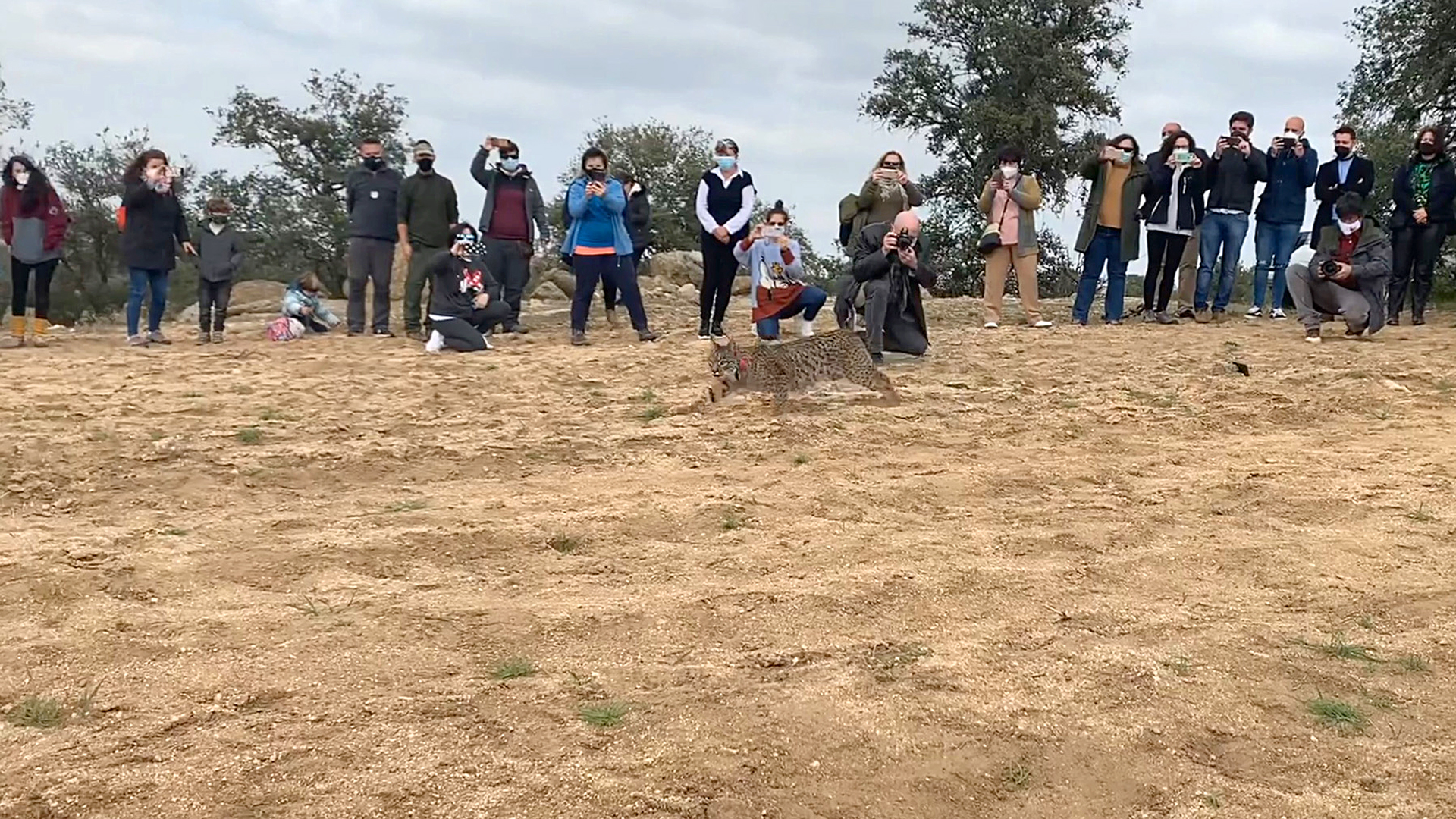 Moment the Iberian lynx was released in the natural habitat located in the Toledo Mountains of Castilla. (Consejeria Desarrollo Sostenible CLM/Real Press)

TOLEDO, Spain — Ten endangered Iberian lynxes born in captivity have been released into their natural habitat as a part of a project in Toledo province of Castilla–La Mancha, Spain.

The video footage shows lynxes released in their natural habitat by biologists. The last two lynxes released are a female called Rwanda and a male named Rubens born in a breeding Centre in Santa Elena, southern Spanish province of Jaen, in 2020. They cared in a way that avoided human contact so that they could be released.

“The habitat into which they were released had been checked to ensure they have enough rabbits to hunt. They are also monitoring their social behavior with other lynxes living there,” said Paco Sanchez, biologist, technician (Department of Sustainable Development), and one of the experts participating in the region’s ‘Life Lynx Connect’ reintroduction program.

The Life Lynx Connect program was initiated in 2014, and until now, 104 Iberian lynxes have been released in Castilla-La Mancha. The project focuses on increasing the numbers of this breed as they are one of the world’s most endangered species.

The steps taken by the project include improvement in genetic and demographic outlook, conservation management to be developed at the trans-boundary level and to ensure the long-term viability of lynx, the incorporation of the use of computer modeling based on data.

In 2020, 146 lynxes were born in the wild; hence it is believed that the population is steadily increasing.

“Their breeding is done carefully, without human contact, and before being released, they should have learned hunting techniques to guarantee their survival,” said Sanchez. “They have adapted very well, and the survival rate is between 60 and 65 percent, which are excellent numbers.”

The biologist also explained that this program is essential for the Iberian Peninsula. The Iberian lynx used to have substantial numbers before a massive decline from the 1950s onwards. This situation occurred due to excessive illegal hunting, with farmers considering them a threat to their livestock. Their numbers were also affected by a disease that affected rabbits (their primary prey).

The situation remains difficult for this species, which suffers from numerous threats. It is still listed as endangered on the IUCN’s Red List. As per Sanchez, their main danger is that they are run over by vehicles while trying to crossroads, which cut their natural habitats and make it hard for them to interact with other lynxes.

Poachers are another problem, often resulting in lynxes dying prematurely. The animals fall into traps left there for other animals or are shot by hunters. Sanchez explained that lynxes are not hunted for their meat or fur, as there are laws in Spain banning their commerce.

The Iberian lynx plays a vital role in the ecosystem. Their part is essential in regulating the herbivorous populations, controlling disease, and regulating small carnivorous people.

«Previous Post
VIDEO: Well You’d Be Grizzly If You Woke Up After Five Months And There Was Nothing To Eat»Next Post
Pedigree Scum: Puppy Scam Fraudster Facing Court