As a record number of unaccompanied minors arrives at the southern border, the White House adjusts its policies. 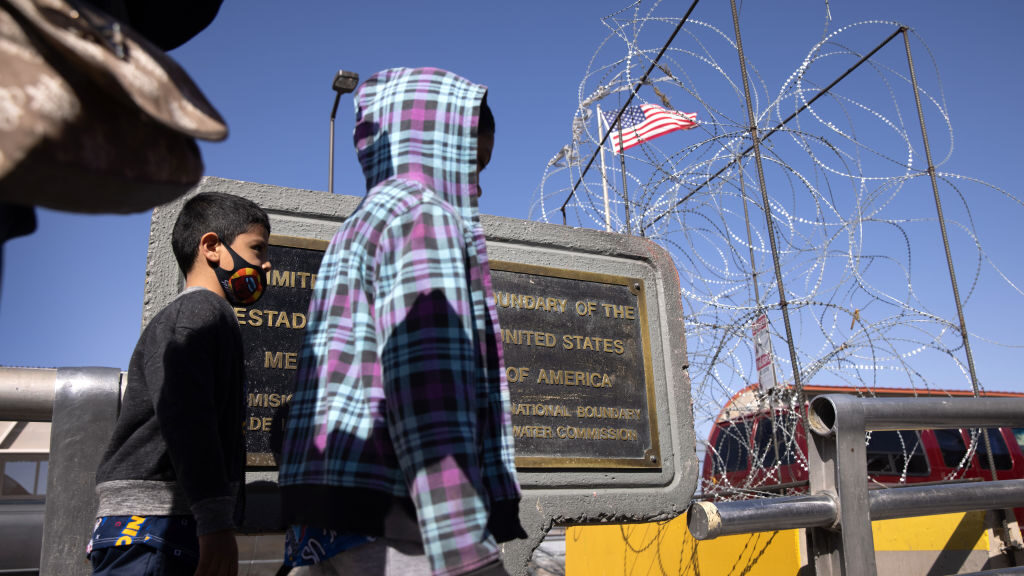 Asylum seekers walk past U.S. Customs and Border Protection officers while crossing into the United States from Mexico on March 16, 2021, in Ciudad Juarez, Mexico. Some 50 asylum seekers crossed the Santa Fe International Bridge as part of the Biden administration's unwinding of the Trump-era Migrant Protection Protocols, also known as the “Remain in Mexico” immigration policy. (John Moore/Getty Images)

Though the White House has emphatically stated that the southern border is closed, the administration of President Joseph R. Biden Jr. is hastening to manage a huge surge in unaccompanied children detained by U.S. border agents.

A record 4,276 unaccompanied minors were being held by U.S. Customs and Border Protection as of March 14, an increase of more than 1,000 over the previous week. The mass of immigrants crossing the Mexico border began after Biden signed executive orders shortly after taking office on Jan. 20 that paused deportations and made changes to the “remain in Mexico” policy of the Trump administration.

In the month of February, border agents said they “encountered 100,441 persons attempting entry along the Southwest border. This total represented a 28 percent increase over January 2021.”

Also in February, agents in the Rio Grande Valley sector [in Texas] “apprehended 16,583 family units and 11,242 unaccompanied children,” the border patrol said in a March 17 press release. “This has marked an increase of over 100 percent in both categories.”

While the administration allows unaccompanied children into the country, single adults and families who crossed illegally are turned away, with some exceptions.

“President Biden has made clear from day one that he wants to change our immigration system,” Roberta Jacobson, coordinator for the southwestern border on the National Security Council, said at a White House press briefing on March 10.

“The president has committed to seeking $4 billion over four years to address the root causes of migration, including corruption, violence and economic devastation exacerbated by climate change. As part of that plan, we will address the causes that compel individuals to migrate &mldr; .”

Jacobson announced the restarting of the Central American Minors program for children to be reunited with a parent who is legally in the United States. That program was halted under the Trump administration.

Biden, who has not held a press conference since taking office, sent this message to would-be immigrants during an interview with a television network on March 16: “Don’t come.”

Homeland Security Secretary Alejandro N. Mayorkas said in a statement on March 16 that his agency has directed the Federal Emergency Management Agency “to assist in developing the capacity to meet the surge of unaccompanied children.”

He also announced plans to open new processing centers jointly operated by Customs and Border Protection and the Department of Health and Human Services so that children can be placed in the latter’s care “immediately after border patrol encounters them.”

“Longer term, we are working with Mexico and international organizations to expand our new virtual platform so that unaccompanied children can access it without having to take the dangerous journey to our border.”

The virtual platform “enables individuals with active cases in the ‘remain in Mexico’ program to actually register for relief using their phones,” Jacobson said during her press briefing.

The Red Cross has also been asked to assist in finding temporary shelter for unaccompanied minors, said Michael Hart, a spokesman for the Federal Emergency Management Agency.

The shelters, which are run by trained volunteers who undergo background checks, will adhere to Covid-19 safety protocols, the Red Cross said. Meanwhile, the Department of Health and Human Services has opened temporary housing for 3,000 teens at the Kay Bailey Hutchison Convention Center Dallas in coordination with Red Cross volunteers. The facility may be used for up to 90 days.

The Federal Emergency Management Agency stated on March 12 that the American Rescue Plan Act of 2021 includes $110 million to help organizations across the country to provide humanitarian assistance to migrants from the southern border.

The Biden administration is seeking $4 billion from Congress in its U.S. Citizenship Act of 2021 “to address the underlying causes of migration in the region, including by increasing assistance to El Salvador, Guatemala and Honduras, conditioned on their ability to reduce the endemic corruption, violence and poverty that causes people to flee their home countries.”

The bill would also establish centers throughout Central America to register and process displaced persons for refugee resettlement “and other lawful migration avenues” in the U.S. or other partner countries.

While many unaccompanied children cross the border to be reunited with relatives, others are fleeing violence and poverty. The Department of Health and Human Services “is legally required to provide care for all children until they are released to a suitable sponsor, almost always a parent or close relative, while they await immigration proceedings,” according to its website.

Though unaccompanied children in border patrol custody by law may be detained no more than 72 hours, hundreds have reportedly been detained for more than 10 days.

“We have ended the so-called Migrant Protection Protocols, which sent people back to Mexico to wait, sometimes for years, for a chance to present their asylum claims,” Jacobson said. The sprawling Matamoros, Mexico, camp — considered dangerous and overcrowded — has been closed.

“Working with the government of Mexico, international organizations, and NGOs, we have safely admitted over 1,400 migrants” and closed the camp, she said.

The administration has also ended the information-sharing agreement between Immigration and Customs Enforcement and the agencies caring for unaccompanied migrant children.

The Central American Minors program has been restored, “to reunite qualified children from El Salvador, Guatemala, and Honduras with their parent or parents who are lawfully present in the United States.” The program was terminated in 2017.

The Biden administration has also launched an immigration portal that offers an overview of the president’s executive actions, proposed legislation and other pertinent information.