Relishing the role of underdog, the former light welterweight champ is confident he will hand Vergil Ortiz Jr. his first pro loss. 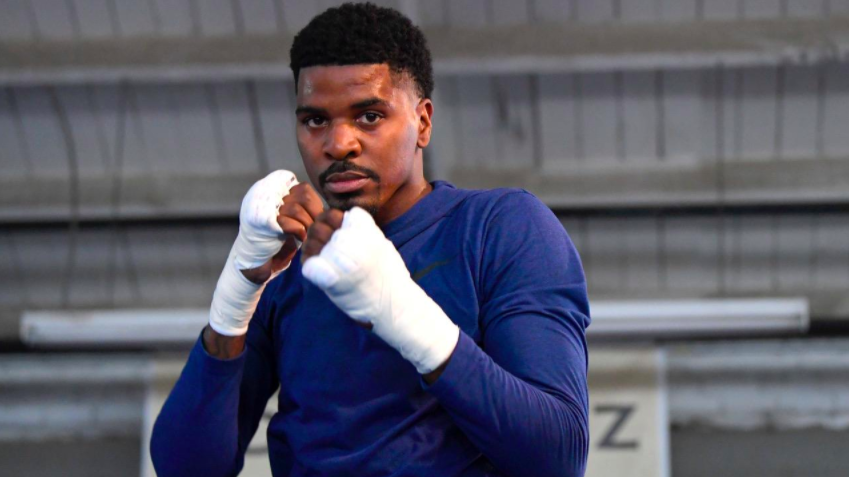 On March 20, Fort Worth, Texas, will be in for a treat from two homegrown pugilists with a lot at stake. Dickies Arena will be rocking when former world champion Maurice Hooker (27-1-3) 18 knockouts, faces off against one of boxing’s hottest prospects, Vergil Ortiz Jr. (16-0) 16 knockouts.

Hooker will be settling into his new weight class at 147 pounds. He held the WBO title in the light welterweight division and once competed for the unified championship in that class. And even though Hooker came up short, his performance and the amount of heart he showed during that bout earned respect throughout the sport.

Hooker is ready to get back on top, and for those fans thinking this is a torch-passing fight, Hooker is adamant to prove them wrong. It won’t be easy; Ortiz sports a 100 percent knockout ratio, and has never had to fight past the seventh round. Hooker is not impressed, and along with his new weight class, he welcomes a new team featuring world-class trainer Brian McIntyre, and Red Spikes and his staff will take over coaching duties.

“The Battle of Dallas” will be a hotly contested welterweight showdown that will be available live on the DAZN app.

During his conversation with Zenger News, Hooker makes it clear that he wants the same energy that he’s getting from fans and media before the fight to continue after he shocks the world. He also opens up about his new team and weight class.

Zenger: March 20th is right around the corner. How is training going?

Zenger: You’re officially a welterweight now. Do you feel like you have been putting on the weight properly and affectively?

Hooker: Ah man, it’s been easy. Camp is going good. Everything is going good. I’m getting ready to show up next week. I know I’m the underdog, but &mldr; I’m ready.

Zenger: This will be the “Battle of Texas,” as both you and Vergil Ortiz are from the Dallas area. Does that add any pressure on you and the performance you feel you have to put on?

Hooker: It’s just part of the process for me. I think all the pressure [is] on him. He’s the promoter’s guy; they talking about he’s up next; he’s calling out [WBO welterweight champion Terence] Crawford. He’s doing a lot more things than worrying about the fight. I’m just focused on this fight. It’s on my mind. This is the only thing I have right now is to stop him.

Zenger: I remember when you and Errol Spence Jr. first started to get the boxing buzz in Dallas going. And now it seems to be a staple to host fights. To get in on the ground floor, and see it blossom to where it is now, that has to be a great feeling.

Hooker: Man &mldr; it’s amazing. We got everybody coming up in the amateurs and under us; we givin’ them big hopes. I tell everybody: Keep training hard, keep pushing and you never know what might happen. Now, look at Dallas. We comin’ up.Zenger: When you face Vergil Ortiz on the 20th, he will be the sixth undefeated fighter you will be facing in your last seven fights. Either you are crazy or very determined (laughing).

Zenger: The fact that six of your last seven opponents had unbeaten records is unheard of. In today’s time, when a lot of fighters try to perfectly place themselves in position for opportunities, you’re just fighting whoever they line up. Respect!

Hooker: I just want to show everybody, yeah he’s good. He’s fought 14 or 15 times, and won all of them by knockout, but look at everybody he fought. Be honest. Just tell everybody to be honest with themselves. I got a lot of people talking down on me about this fight. “He’s this and he’s that.” Yeah, he’s young, but what else does he have on me? I got experience; I got power in both hands just like him, and I’m coming to fight.

Zenger: I know there is an age difference, but given the fact that you guys are geographically so close, have you ever crossed paths with him?

Hooker: I wanna say I seen him at the old Maple [boxing gym]. I think at the time, my coach was Coach Vince, and they had to tell him to get out the ring. I think I was sparring, and he was just sitting in the ring in the corner. But other than that, I really haven’t seen him. They wanna call it a rivalry. This not a rivalry. He’s too young.

Zenger: He is actually 16-0 with 16 knockouts. To solve a puzzle that haven’t been solved yet, do you have to figure out his weaknesses or just be the best version of yourself?

Hooker: To me, I just think I need to go in there and be myself, be the best I can be. Do the same things I have been doing in my training camp. My main thing is to stay focused. Yeah, he’s good; we know he’s coming. They say he’s got power — we know that — but now we gonna test it. Let’s see what else he has; let’s see where he comes up short at; let’s see what weapons he don’t have.

Zenger: It’s a good thing you fought three times in 2019 because you didn’t fight at all in 2020. I’m sure that was due to COVID. How did you spend your 2020 from a boxing standpoint since you didn’t fight?

Hooker: At that time, they had a lot of fights fell out. I think I was supposed to be signing with PBC [Premier Boxing Champions], so I was in camp probably like four or five times out of the year last year. I was training, but it didn’t go through. But I’ve been in the gym, and I have been training. I’m happy to get this fight. When I got offered this fight, I was like, “Heck yeah, let’s do it.”

Zenger: It was starting to get tough for you to make 140 [pounds]. How important was it for you at this stage in your career to make that move up to 147?

Hooker: I think it was very important. I wanna be a champion in another weight class. At 140, what else was there? Jose [Ramirez] getting ready to fight [Josh] Taylor, and then I think everybody going to be moving up. I think it was just that time. Me making 140 was very hard. The second half of the fight, my legs would hurt. It was just time. Fighting Vergil will show everybody I’m ready for 147.

Zenger: Do you feel the experience of being in a unification bout — being in tough fights as opposed to him kind of blowing through everyone — will be the difference in this fight?

Hooker: I don’t think it will be the difference because like I said, he’s got skills, and he’s been around for a long time. But he ain’t been in a fight like this before. But I just think if I go in there and do me, I’m going to come out on top. I’m ready; I’m focused.

Zenger: You are embracing the underdog role, but do you feel a little disrespected that you are such a big underdog heading into this fight?

Hooker: I mean it’s not my first time being an underdog. When I fought Alex Saucedo, I was the world champion, I went to Oklahoma and I was the underdog. How am I going to be the underdog, and I’m the world champion? See what happened: I got knocked down, I got up and I stopped him. I went over to England, and I fought Terry Flanagan. I was the underdog, and you seen what happened. I won. So, being the underdog, it’s not my first time. I just gotta show the world, you know? I think it’s a little bit disrespectful because he’s young and don’t have experience, but hey, it just makes me go harder.

Zenger: Has this year-long layoff and COVID halting boxing to a degree make you love the sport more because you now see how quickly things can change?

Hooker: Oh yeah! I think I fell in love with it more. I got a new team. I spent a lot of time with them training. That’s probably what I needed to spend more time with them training and just learning from them. I think it was a blessing, and now I just have to go out here next week and show everybody what I got and what I’m about.

Zenger: You have Brian McIntyre, also known as ‘BoMac’, in your corner now. I have seen you refer to yourself as the ‘New’ Maurice Hooker. Are these mental changes, physical changes or a combination of the two?

Hooker: It’s a combination of the two. Because you know in boxing, you lose one fight, and everybody thinks it’s over. So, I’m moving to a new weight class; I’m fighting a big name; he’s up and coming, too. He’s young. That’s what I mean by “New.” It’s been a year since people have seen me, so I’m going to be like new to them. Show them that I still got something left.

Zenger: Not to give the game plan away, but you have been accused in the past of not using your height and reach for a more fan-friendlier style. Can we expect to see new or added wrinkles from you?

Zenger: What has the work with the new team been like for you?

Hooker: Man &mldr; just working with him is totally different. That guy is smart. The whole team smart. I’m constantly learning something new. Now it’s time to put everything together. The way he push me, the way the team push me, I think I’m more prepared for this fight than any other fight.

Zenger: They say you can’t teach an old dog new tricks, but it sounds like you are still learning.

Zenger: I can’t wait to see the finished product. Good luck to you, my man. Is there anything else you want to add before I let you go?

Hooker: Everybody who writing me off, calling me a big underdog and saying Vergil this and Vergil that, keep the same energy after the fight. Give me them same comments after the fight. Don’t try to change it up. Stay on that other side. I’m ready! Everybody stay tuned.