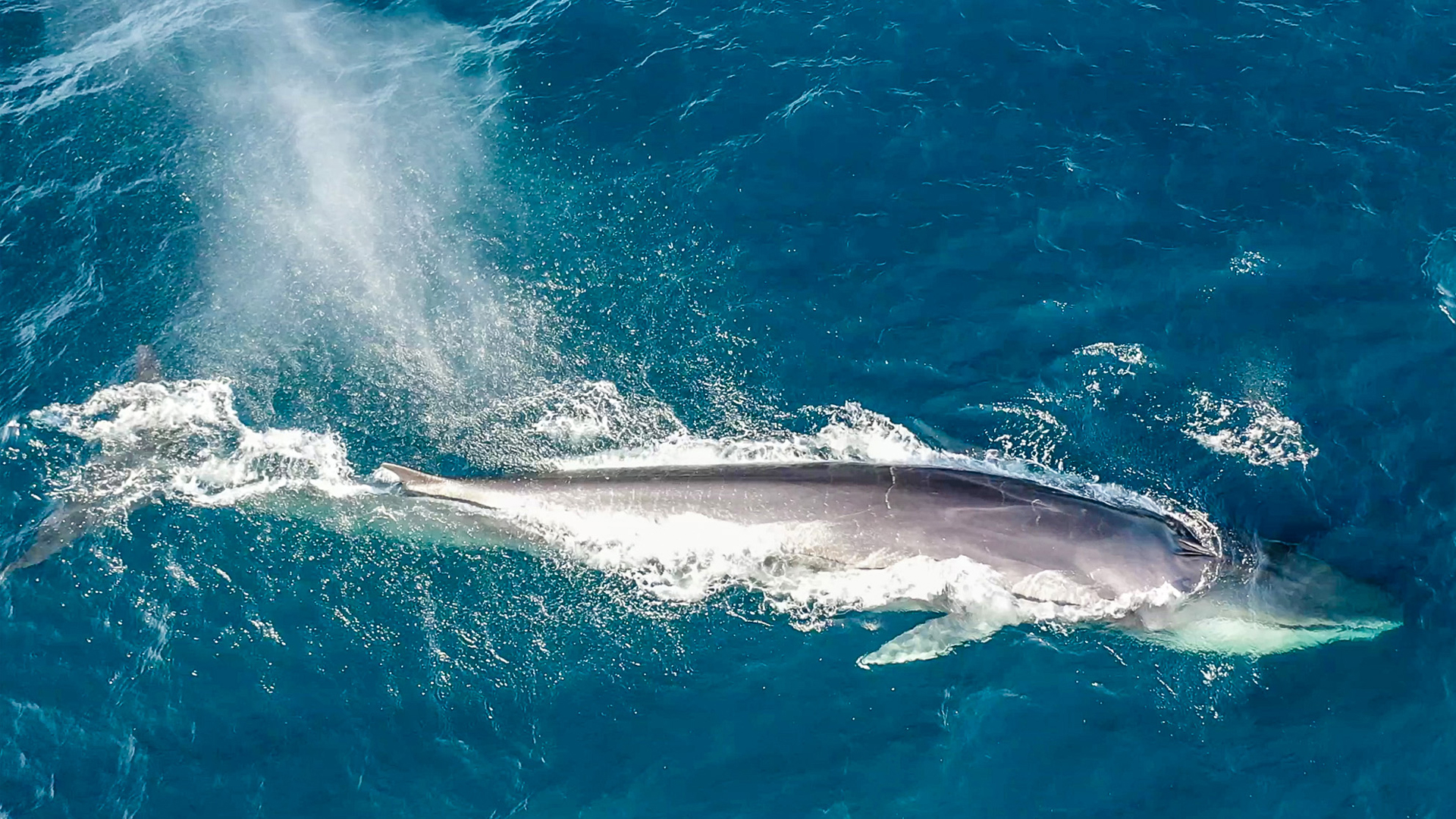 Drone footage of one of the fin whales seen in the eastern seaside town of Garraf, Spain. (Asociacion EDMAKTUB/Real Press)

GARRAF, Spain — Animal lovers and experts were on cloud nine after witnessing the arrival of nine endangered fin whales, which were spotted off the Catalonian coast in northeastern Spain.

The rare species were spotted after the food supply in the country’s coastal waters increased due to bad weather.

Local whale expert Eduard Degollada said that the early appearance of the mammals is likely due to an exceptional abundance of food this year linked to waters unusually high in nutrients.

“This year has been stormy and cold, and that means there are more nutrients in the waters,” Degollada said. “Having more organic material in the sea helps algae to grow, and in turn the main food of this species, which is krill.”

Degollada is also the president of the scientific research association EDMAKTUB and studies whales off the Catalonian coast.

Whales are the largest animal on the planet apart from the blue whale and are known to grow up to 24 meters long.

Five-centimeter (1.9-inch) crustaceans are why the whales visit the Spanish coast. The early find has been an exciting surprise for researchers in Degollada’s Fin Whale Project, who are studying the massive cetaceans for eight years.

By this time they are usually only spotted starting to search for food but this year they are already feeding, Degollada said, proving that the feeding conditions are perfect this year.

“We know that the whales go to the Mediterranean Sea between December and February through the Strait of Gibraltar, and arrive around March,” he said. “But this year, they have arrived earlier than usual.”

“Then in June and July, they are seen going back to the Strait of Gibraltar, traveling to other waters and then the ocean.”One of the nine mammals spotted feeding off the coast is a well-known veteran of Spanish waters known as Bruja (meaning witch) and can be identified because ‘its flipper has the form of a witch’s hat’,” said Degollada.

Bruja has been seen in these waters from as early as 2011, even before the Fin Whale Project started, he said.

“Yesterday, we wrapped up a very productive week with many common rorqual sightings, often feeding. We also highlight the great abundance of seabird species, fish, and dolphins. This week we continue!” wrote EDMAKTUB along with pictures of the whales on their Facebook Page.

The project has identified 132 individual whales so far. Biologists confirm that numbers dropped in 2019 from 2018 levels, a significant and concerning decrease. Covid-19 lockdown made counting impossible in 2020, so scientists hope this early sighting is a good omen for returning to 2018 levels.

The fin whale is listed as ‘Vulnerable’ in the International Union for Conservation of Nature Red List after hunting severely depleted numbers in the 20th century.

And, though an International Whaling Commission moratorium on hunting them exists, the long, slender species sometimes called the ‘greyhound of the sea’ is feared to be targeted by Japanese hunters after the country quit the International Convention Regulation of Whaling in 2019.

“But their main threat is caused by shipping activity through collisions and propellor strikes or by becoming entangled in fishing nets,” Degollada said. “And, the noise from boats also has a significant negative effect.”

So if researchers find a whale calf off the coast, he said, it is because the mum has suddenly died because “mums never leave their offspring behind.”