VIDEO: Slowly Does It: Slow Loris Returns To The Wild After Treatment For Power Line Shock 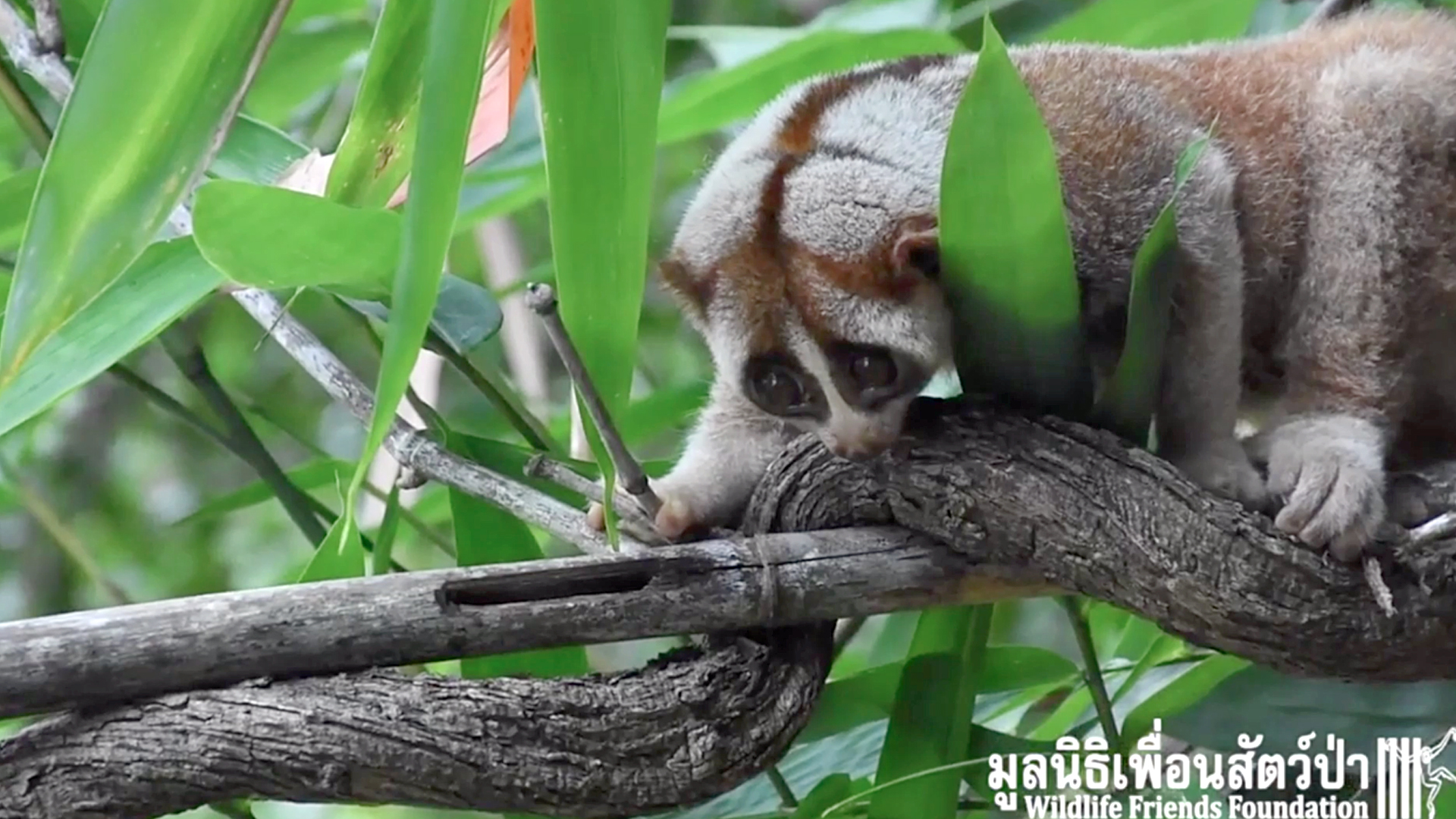 The slow loris was rescued after it was electrocuted and released in wilderness in Tha Yang District, Thailand. (WildlifeFriendsFoundation/Clipzilla)

THA YANG, Thailand — A slow loris, who was recently electrocuted when it climbed onto a power line, was released into the wilderness after completing its rehabilitation treatment at the Wildlife Friends Foundation in Thailand.

The slow loris in the video is back into its natural wild habitat, where a rescue center volunteer carries the small primate in a pink plastic basket and holds it close to a tree, where the animal quickly jumps on and sprints back to freedom.

Slow lorises are a group of several species of nocturnal primates found in Southeast Asia and bordering areas, ranging from Bangladesh and Northeast India in the west to the Sulu Archipelago in the Philippines in the east, and from Yunnan province in China in the north to the island of Java in the south.

Slow lorises are nocturnal animals, so they are inactive during the day. These animals also move slowly and deliberately, barely making any noise, and when threatened, they stop moving and remain immobile. Hence, the ‘slow’ in their names.

“The slow loris in the video got badly wounded, and it took about five weeks for it to recover before it could be released back into the wilderness where it belongs,” said Edwin Wiek, director and founder of the Wildlife Friends Foundation Thailand.

All slow loris species are listed either as ‘Vulnerable’ or ‘Endangered’ on the International Union for Conservation of Nature (IUCN) Red List.

Slow lorises are one of six venomous mammals and the only known venomous primate, as per a research article by the National Center for Biotechnology Information.

Slow lorises are an endangered species due to many anthropogenic-related reasons, such as deforestation and wildlife trade, including exotic pet trade, traditional medicine, and bush meat. Additionally, they suffer power line injuries, just as the little one in the video is rehabilitated after receiving severe burns from a power line it climbed.

Pet trade is the biggest threat to these nocturnal animals. Keeping a slow loris as a pet is illegal in most countries since they have a poisonous bite harmful to humans.

“Slow lorises cannot express natural behaviors in captivity. In the wild, they travel long distances at night in their search for food, making confinement in a small cage incredibly cruel,” as per International Animal Rescue, the world’s largest rehabilitation center for critically endangered slow lorises.

The Wildlife Friends Foundation Thailand (WFFT) is a charity organization registered under Thailand law whose main objectives are rescues of maltreated and neglected animals. The organization also works to prevent hunting and illegal trade in wild animals, conservation of all-natural resources including fauna and flora, and providing sanctuary for sick and disabled animals.

Their focus is on endangered animal species to support the conservation efforts of wildlife on the Asian continent. Their headquarters are in the town of Phetchaburi (or Phet Buri), located in southern Thailand. The city is also the capital of Phetchaburi Province.