Captivating footage of the moment one of the rarest, highly endangered animals in the world is born.
By Maja Mishevska March 17, 2021
Facebook
Twitter
Linkedin
Email 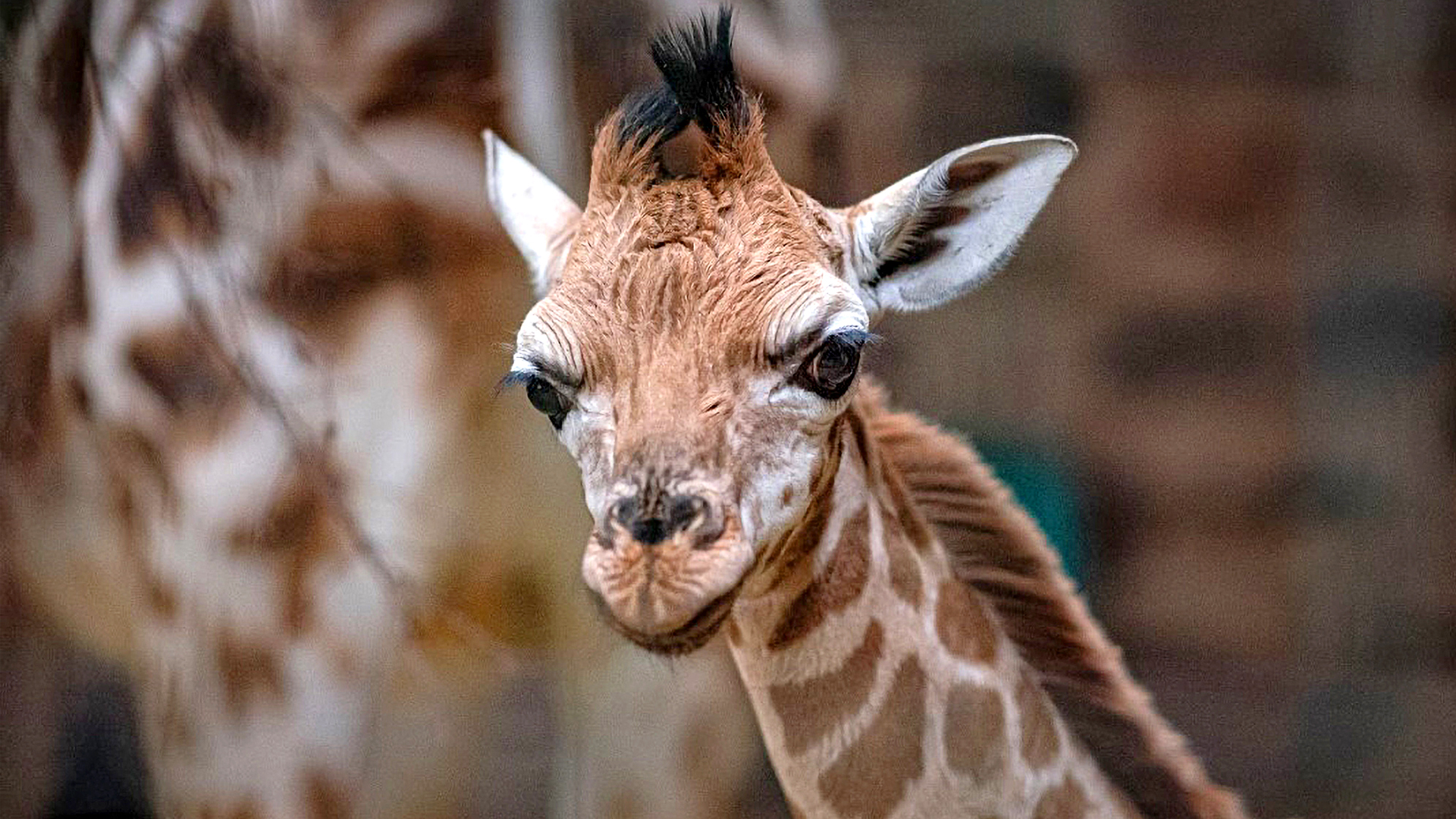 The newborn giraffe at Chester Zoo in England. (Chester Zoo/Clipzilla)

BLACON, England — The moment of the birth of a rare and highly-threatened Rothschild’s giraffe was recently caught on camera and soon became a talking point.

The male giraffe calf was born to a 13-year-old mom named Orla at the Chester Zoo in Cheshire, the U.K., on March 3.

The zoo’s surveillance camera footage shows mom Orla delivering her youngster in the 15th month of her pregnancy, from a height of 2 meters (6.6 feet) onto the soft straw-covered ground.

“Giraffes give birth standing up, and so their young receive quite a welcome to the world, dropping around six feet to the ground,” said Sarah Roffe, giraffe team manager at the zoo. “Although this seems like a long way, the fall breaks the umbilical cord and helps stimulate the calf’s first breath — it’s a dramatic entry, but it’s just how they do it.”

The calf took its first wobbly steps around its mom and its first suckle of milk moments after its delivery.

The new mother has taken to her duties naturally. “Orla, an experienced mother, has slipped back into the role like a natural. She’s doing everything right, and it’s lovely to see the close bond between the two of them,” said Roffe.

“This latest arrival joins a group of eight Rothschild’s giraffes at the zoo, and it’s always an exciting time for the herd when a new calf arrives.”

Two other older females, Dagmar and Tula, appear to have taken on the role of protective aunties, helping the mother watch out for her new-born.

“The other youngsters in the group love running around together, and so, as soon as the calf starts to gain confidence and venture outside, I’m sure they’ll enjoy having a new playmate around,” she said.

The Rothschild’s giraffe is ‘highly threatened,’ and its population has declined 50 percent in the past couple of decades, making it one of the world’s most endangered mammals.

As per estimates, around 1,600 of these giraffes remain across Africa. As per the International Union for the Conservation of Nature, habitat loss and poaching are the two major threats.

“For many, it comes as a shock that three of the giraffe subspecies are now listed as ‘Critically Endangered’ (Kordofan and Nubian giraffe) and ‘Endangered’ (Reticulated giraffe), while others range from ‘Vulnerable’ (Thornicroft’s and West African giraffe) to ‘Near Threatened’ (Rothschild’s giraffe),” notes a research article by Giraffe Conservation Foundation.

“Once wide-ranging across Kenya, Uganda, and Sudan, the Rothschild’s giraffe has been almost eliminated from these areas and now only survives in a few small, isolated populations,” said Mike Jordan, director of animals and plants at the zoo.

Chester Zoo has worked with the Giraffe Conservation Foundation and the Uganda Wildlife Authority to protect the Rothschild’s giraffes in the wild for a long time. In the past several years, their efforts have succeeded. The number of species in the areas they have been working in has increased.

“Encouragingly, they are starting to recover with the support of conservation programs such as those supported by the Chester Zoo. But habitat loss and an ongoing poaching crisis continue to threaten these species, where the giraffes are hunted for their tails to be used as good-luck charms,” said Jordan.

«Previous Post
Outrage As France Limits Compensation For Kids With Autism Caused By Dangerous Drug»Next Post
VIDEO: Slowly Does It: Slow Loris Returns To The Wild After Treatment For Power Line Shock