India Home To 22 Of 30 Most Polluted Cities In World, Study Claims 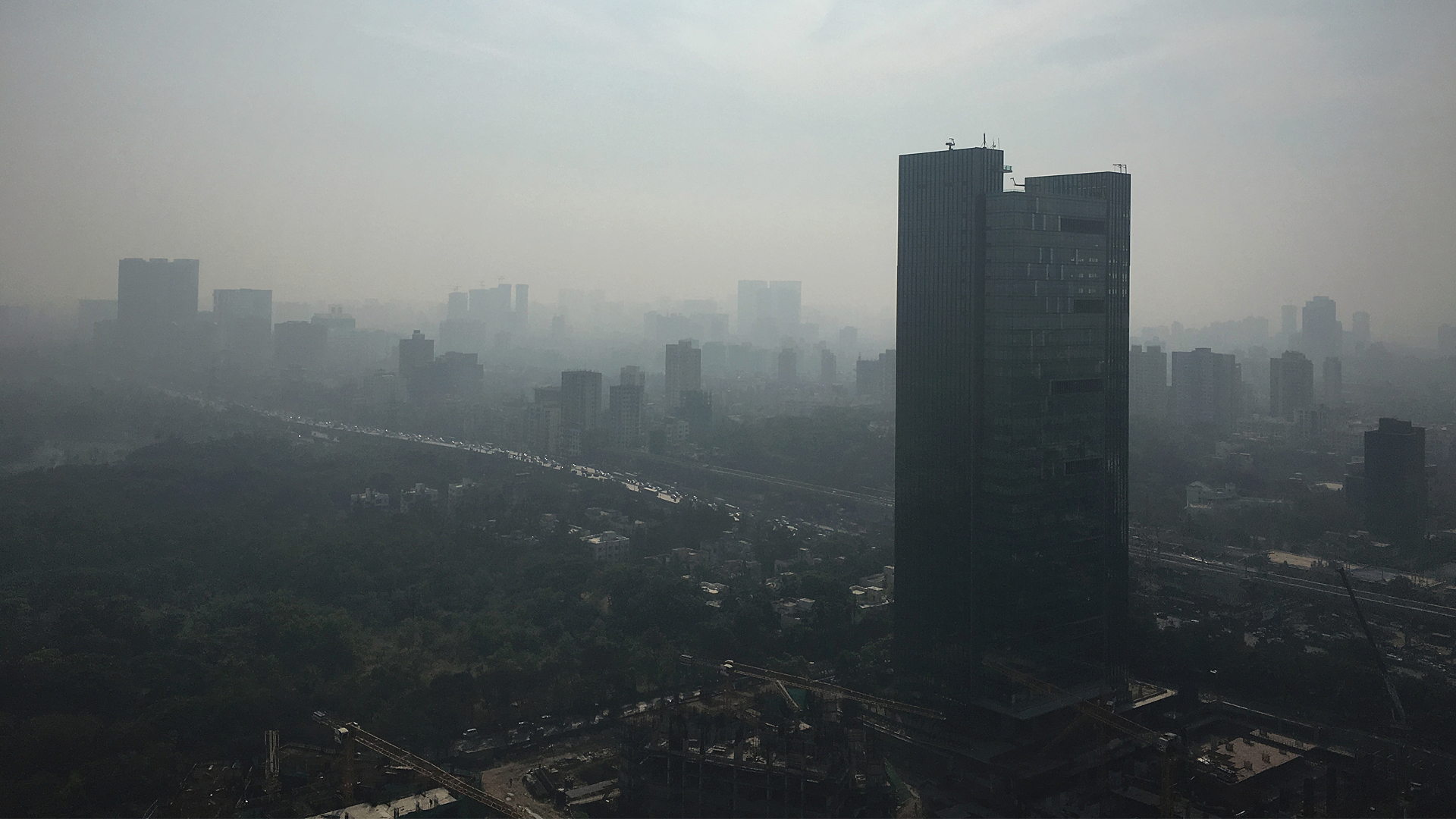 South Asia was the most polluted region globally, with India, Pakistan, and Bangladesh comprising 42 of the 50 most polluted cities, according to the IQAir report. (Aquib Siddiqui)

The air quality improved in 84 percent of all monitored countries due to Covid-19-related lockdowns in 2020. The cities which saw major improvements were Paris (-17 percent), Seoul (-16 percent), New Delhi (-15 percent), Chicago (-13 percent), and Beijing (-11 percent), according to the report. 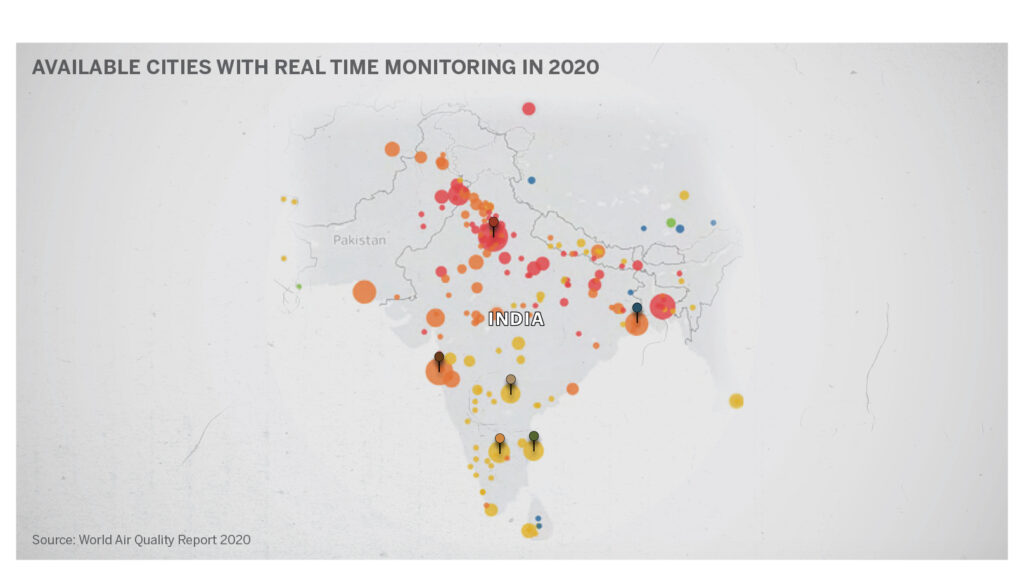 “The overall pollution levels are on a declining trend in India, especially New Delhi, for the past five years,” Anumita Roy Chowdhury, executive director, research and advocacy at Centre for Science and Environment, told Zenger News.

“However, even after the decline, the levels are high, and more reduction is needed to meet cleaner standards. The current action plan underway in Delhi has restricted the problem and pulled the pollution curve downward, but the challenge is big in India.”

“Progress is only marginally attributable to India’s flagship National Clean Air Programme introduced in January 2019, which targets Particulate Matter 2.5 reductions between 20 percent and 30 percent in 122 selected cities by 2024 from a 2017 baseline,” the report states.

Particulate Matter 2.5 refers to fine particulate matter smaller than 2.5 micrometers in diameter. Exposure to it is considered the most important environmental risk factor for deaths globally, and it led to 4.2 million premature deaths in 2015.

Stricter measures to fight air pollution in New Delhi and the National Capital Region were also laid down in a Graded Response Action Plan, which was put into action in October 2020. The action plan was first introduced in 2017.

The report notes that “Delhi, the world’s second most populous city, is located southeast of India’s agricultural breadbasket, where open burning is common. It is estimated that as much as 20-40 percent of Delhi’s air pollution originates from Punjab farm fires.”

Of the 22, apart from Bhiwari in the western state of Rajasthan and Muzaffarpur in the eastern state of Bihar, the rest are located in the northern parts of India.

Chowdhury said that a multi sector effort is needed to reduce air pollution in India, with the availability of the latest technology to meet the emission standards. 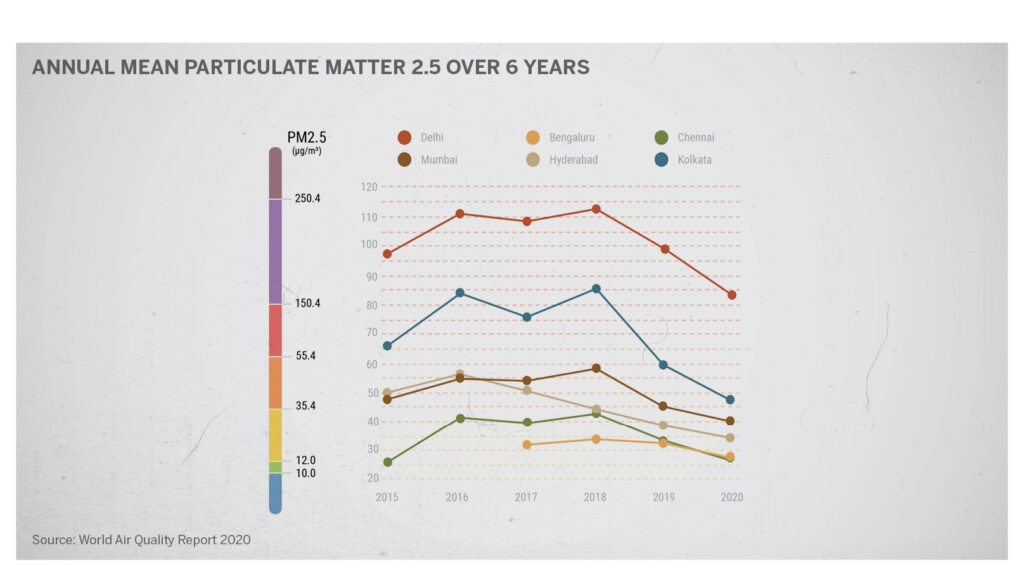 “Vehicles, industries, power plants, waste burning, and construction activities are the main sources of air pollution in India,” she said. “We must use clean fuels to reduce the pollution and scale up the usage of cycles. The waste burning can be prevented if there are strong municipal systems for waste collection, segregation, and disposal.”

In 2019, a study published in the peer-review scientific journal “The Lancet” reads that deaths and disability caused due to air pollution cost India $36.8 billion.

The study, “Health and economic impact of air pollution in the states of India: the Global Burden of Disease Study 2019,” reveals that 1.67 million people died in India due to air pollution. The majority of these deaths were from ambient particulate matter pollution (0.98 million) and household air pollution (0.61 million).

Mondal claimed that there are not many deaths due to direct air pollution. Still, it can act as an add-on factor that makes the lungs more vulnerable to certain diseases such as lung cancer or chronic obstructive pulmonary diseases.

“In India, we observe that lung-related diseases are more due to air pollution than smoking cigarettes,” he said. “Pollution must be controlled, especially in the densely populated area. People living in cities should wear a mask to avoid such congestion in lungs.”

South Asia was the most polluted region globally, with India, Pakistan, and Bangladesh comprising 42 of the 50 most polluted cities, according to the IQAir report.

The response to tackle air pollution in low-economic countries has not been sufficient. As per IQAir, many countries in the Middle East, South America, and Africa lack the equipment to monitor and report air pollution.

“Breathing should not be deadly,” said Frank Hammes, chief executive officer of IQAir, in a statement. “The fact that poor air quality claimed an estimated 160,000 lives in the five largest cities alone should give us pause, especially in a year when many cities were seeing lower air pollution levels due to less economic activity. Governments, corporations and individuals must do more to eliminate the sources of air pollution and make our cities better places to live.”

The report is based on the Particulate Matter 2.5 data measurements from 106 countries measured using ground-based monitoring stations from 2019-2020. Of the data sources, 66.6 percent were operated by governmental agencies, while the others were managed by residents, non-profit organizations, and companies.

(Edited by Gaurab Dasgupta and Amrita Das. Map and Chart by Urvashi Makwana.)