Water cannons, police batons, gelid temperatures, hailstorms — nothing has deterred the farmers protesting over three new farm bills around India’s national capital New Delhi over the past three months as they seem to have found answers to all the predicaments thrown at them.

And, now as summers of northern India approach — where temperatures can touch 50 degrees Celsius (120 degrees Fahrenheit) — the farmers are tasked with reinforcing their temporary shelters or settlements.

Some had even raised permanent brick-and-cement structures on the highways leading to India’s national capital around the borders of Singhu and Tikri before being intervened by police officers.

“We had to stop the construction because the government might use that against us to end the protest. The tents are being built once again, so the protest can continue,” he said.

The farmers have now resorted to temporary structures made of cloth, known as tarpaulin, to battle the extreme heat during the protests.

Mann claimed that harsh summer conditions cannot topple their protest because they are used to such harsh weather, especially while they are farming on the fields. 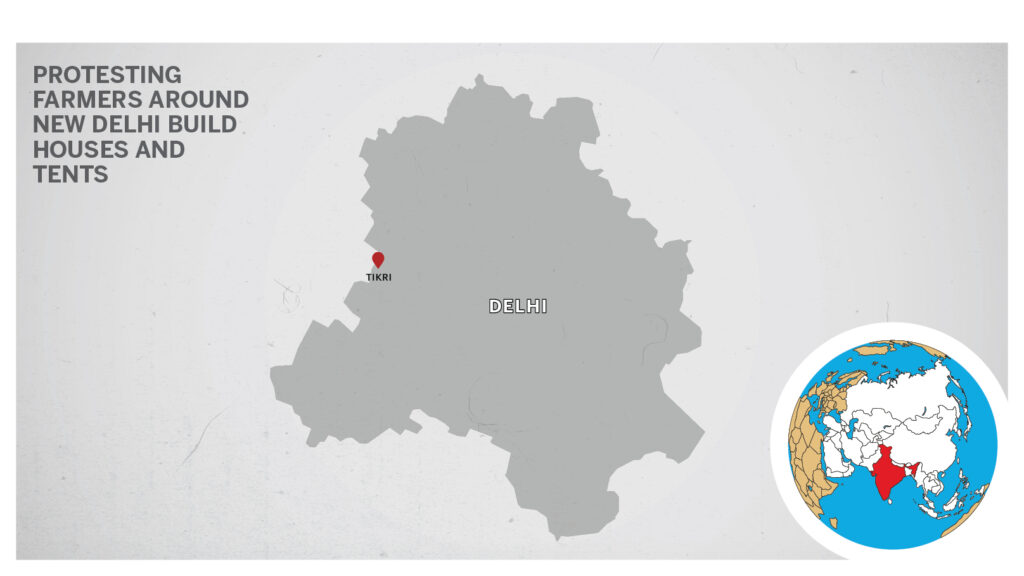 “We cannot afford to lose more farmers as we did in winters,” Mann said. “But the protest will continue. So, we are bringing [water] coolers to our temporary shelters for the elderly farmers to beat the extreme summer heat of the region. We expect no help from our government, but that will only motivate and strengthen us in the future.”

Each reinforced temporary settlement accommodates 15-20 people. Bamboos are vertically inserted into the ground and tied with ropes to the tarpaulin. Structures completely made of bamboo are also being constructed. The bamboos are placed horizontally over the vertical frame to act as the roof.

The structures are rectangular and stand approximately 15-18 feet tall from the ground.

Since the raw material is easily available near the protest sites, especially near the Tikri border, farmers claimed they do not have to travel far. The bamboo is purchased from a shop that is around 200 meters from the spot.

“Be it (the shelters) permanent or temporary, the protest will go on,” said Jiyalal, a 70-year-old farmer and supervisor of the shelters being built. “It is important to be in a shelter during the harsh summer in Delhi as many people suffer from heat strokes.”

Jiyalal is unsure about pulling through the protest but said he will not give up under any circumstances as his grandchildren are growing up and need money for their education.

The first permanent settlement at the Tikri border was built on March 12, and a ‘griha-pravesh’ (a ritual performed by the Hindus before entering a new house) was also conducted by tying a green artificial parrot to the window.

“This is a kind of tradition before moving to a new house and is followed in our ancestral villages,” said Jiyalal. “Each hut needs 12-15 workers to be completed within two days. It has thatched roofs and two windows for ventilation.”

He told Zenger News that most of the materials for the permanent structures were coming from the villages and some of them were being bought from the nearby stores.

“Trucks come near the borders with mud and bricks from villages. The walls of several houses are ready, and a wooden door is also set up. Laborers and workers were called from Punjab to help with the construction.”

A permanent structure with the name “Kisan Social Army”, a farmers’ organization formed to coordinate social media activities, was also raised, where a dedicated team functions for the social welfare of the farmers.

“The team teaches farmers how to use the social media, and ensure that ration reaches those who need it,” said Jiyalal. “We thought of putting air-conditioners in these permanent structures, but the plan fell off.”

“After receiving information from the National Highways Authority of India, we went to the site and saw that the constructions were illegal,” said Ravi Kumar, inspector of Kundli police station.

“The work was stopped, and it looks that no further construction for houses are being done by the protestors on the highway. One First Information Report was also lodged regarding the matter because the permanent structures were made without permission.”

Kumar, when asked about the details of the First Information Report, did not share them. He said the complaint was registered by the National Highways Authority of India, and another complaint was received from the Sonipat Municipal Corporation against the digging of roads for the construction.

The National Highways Authority of India refused to comment, stating a complaint was lodged and the matter was now under the jurisdiction of the police.

As the temperatures begin to rise in the northern parts of India, the seat of the protests, farmers are left with no choice but to find such alternatives, particularly when the protests do not seem to end anytime soon.

Previously, during India’s 72nd Republic day on Jan. 26, 2021, the nation witnessed a tractor rally from the farmers where violence erupted between the police and the protestors, leaving hundreds injured and one farmer dead.

The violence was the first such instance three months after the farmers began their sit-in on Nov. 26, 2020. The sit-in is in protest of the three new farm laws passed by the Indian government in September 2020, which the farmers claim will make it difficult for them to operate and reduce their profits.