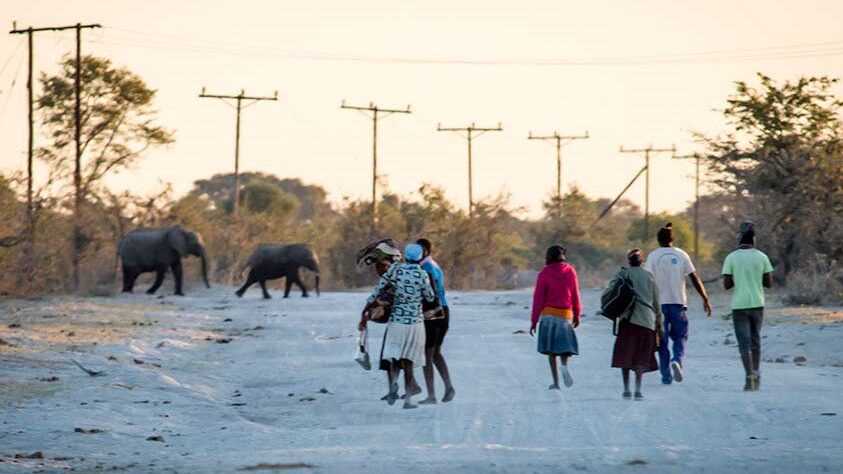 MAUN, Botswana — Coexistence with wildlife is the norm for many communities in northern Botswana. But with increasing numbers of human deaths from animals attacks — particularly by elephants — few solutions are in sight.

Though projects have been carried out under government auspices in the past decade in an attempt to deal with the problem, there is still no policy in northern Botswana that addresses human-wildlife conflict.

Local communities rely on subsistence farming for their livelihood, resulting in agricultural encroachment on wildlife habitat. Also, the economy benefits from tourism in areas of the north, including Maun, Chobe and Okavango Delta.

“In Botswana, conflicts between humans and elephants are increasing,” states a 2018 study on sustainable conservation and management of human–wildlife interactions. “The growing human population (2.2 million) is encroaching on the animals’ already restricted range. Concomitantly, more elephants are adversely affecting arable agriculture production.”

“In the northern part of Botswana, especially the Ngamiland District, the elephant and buffalo are a threat to the main subsistence livelihood of arable and pastoral agriculture,” the study states.

The Department of Wildlife and National Parks, which posts warnings of elephant sightings on its Facebook page, on March 10 said that wildlife officer Moitiredi Seipheto was attacked and fatally wounded by an elephant in the area of the Central Kalahari Game Reserve.

Department Director Kabelo Senyatso said that the incident occurred when Seipheto and two other officers from the department were investigating reports of elephant damage at farms in the Kaka area.

“The elephant appeared to have been injured and &mldr; the wildlife officers decided to tranquilize it,” Senyatso said. Their efforts were unsuccessful, and the animal charged toward them, killing Seipheto.

Senyatso said wildlife officers and police are searching for the elephant, and he asked residents to report any elephant sightings and to exercise caution if they encounter any elephants.

In another incident, Anita Mwabi, a manager at the Drifters campsite on the outskirts of Maun, said that in the nearby village of Chanoga, elephants killed three people in one month.

“Two women from the village were reportedly killed by elephants, one a Motswana and another a Zimbabwean national who was working in the area,” Mwabi said. The other victim, a man who worked in the nearby lands, died while trying to save another woman from the riled-up animal.

It’s not just elephants that pose a danger to area inhabitants. A resident of Maun, Nkoketsang Monnawatsheko, is recuperating in a Francistown hospital after being mauled by a crocodile along the Thamalakane River in Maun in December last year. The crocodile tore off her left arm.

Monnawatsheko had been harvesting tswii, a tuber considered a delicacy that is found in rivers. As she was being attacked, her daughter lost her left hand trying to help her mother. Witnesses said the two women repeatedly stabbed the crocodile with a knife with little success. The crocodile finally retreated after a boy threw stones at it.

Tebogo Mafoko, a community leader in of the areas of Maun, the main town in northern Botswana, said some people have put up signs that indicate dangerous areas.

“When you are around here, it is important to be vigilant because there is a lot of wildlife. Sometimes animals attack civilians when they feel threatened, but in other cases, they are best left to their own devices. People have been coexisting with animals for a long time, and it is a matter of understanding animal behavior and striving to keep safe,” Mafoko said.

Although there are no official totals, the Ngamiland wildlife office reports there has been a high number of deaths from attacks by crocodiles, hippos, elephants and buffaloes in the area. Recently a wildlife officer was killed by a buffalo that was one of eight which residents reported was on the loose. The officer was killed while trying to capture the buffalo with his colleagues.

While some people are killed in unexpected situations, others put themselves in situations where their lives are at risk, said Ngamiland regional wildlife officer Timothy Blackbeard. He said that residents in northern Botswana need to be careful and contact wildlife officers and police when there is a dangerous situation.

Blackbeard said wildlife officers often teach community members how to coexist with wild animals and what measures they can take to thwart danger. However, he said, some people do not heed the lessons, and in some cases they encroach on wildlife habitat.

“Some civilians intentionally put their lives at risk. For example, incidents of crocodile attacks are a common occurrence in the village and surrounding areas, but they can be prevented through vigilance.

“Some residents are said to be fond of carrying out activities such as fishing, traditional ritual cleansings and swimming in the Boro, Tsanakona and Thamalakane rivers, which are known to be infested by crocodiles,” he said.

The government of Botswana came under fire in 2019 for lifting the ban on elephant hunting to allow culling to reduce the population. Botswana has the world’s largest elephant population — more than 135,000 — about a third of all the elephants in Africa.

In a statement detailing the reversal, Botswana’s Ministry of Environment, Natural Resources Conservation and Tourism cited the increasing prevalence of human-elephant conflict, the Department of Wildlife and National Parks’ inability to respond to animal control reports in a timely fashion, and the toll on communities ill-equipped to handle the unimpeded roaming of these roughly 12,000-pound creatures, according to Smithsonian Magazine.

Since then, poaching has increased.

“We have a significant poaching problem … ,” Mike Chase, director of Botswana-based nonprofit Elephants Without Borders, is quoted in a report in National Geographic.

President Mokgweetsi Masisi said that while the protection of wildlife [through counter-poaching measures] is an important aspect of national security, it is equally important to protect human lives.

Wildlife-based tourism is at the heart economic growth and sustainability in the areas of northern Botswana. From 2010-2016, the Department of Wildlife and National Parks, in collaboration with the Global Environment Facility, carried out a project to mitigate human-wildlife conflict.

“The project has successfully achieved the outcomes for which it was established, namely to develop and test an approach towards mitigating the effects of human-wildlife conflict [HWC],” the Department of Wildlife’s January 2016 evaluation report states.

“Many lessons have been learnt pertaining to the implementation of specific HWC interventions. These lessons will be valuable for the future management of HWC on a wider scale.”