Hispanics In Alaska Lost In Translation

Spanish is ubiquitous in some states, but not in Alaska, where only 3.5 percent speak it at home. 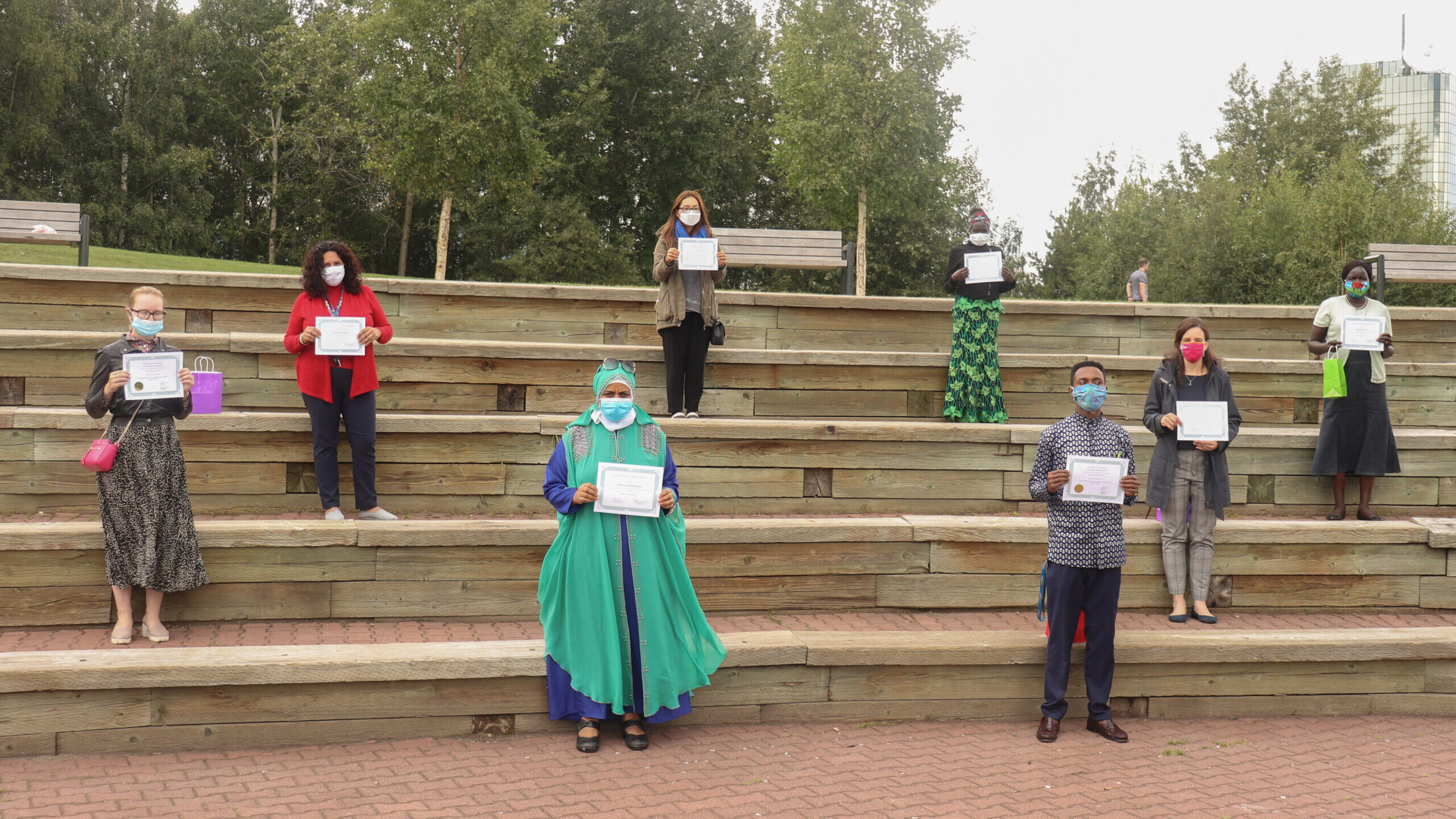 Peer Leader Navigators assist immigrants from many countries in Alaska to apply for Covid-19 relief funds and vaccines. (Marisol Vargas)

ANCHORAGE, Alaska — On a cold January morning, Lilian Montoya drove from her house to a Covid-19 testing center in Anchorage, Alaska. Her husband had tested positive for the disease a couple of days before, as had her daughter and son. Since she was not feeling well, she registered with the testing center and had her nose swabbed.

A few days later, she received a negative result. Still feeling ill and certain that the negative result was false, Montoya repeated the test the following day. It yielded the same result. Only after a third test did the result square with her flu-like symptoms.

Montoya is a Mexican immigrant, and Spanish is her native language. But in none of her visits to the testing center was she offered assistance in Spanish. The registration forms she filled out were written in English, as were the emails bearing her results.

While Montoya is also fluent in English, not all of the more than 27,000 Latinos living in Anchorage have the same language skills.

Latinos have a longer history in states other than Alaska, sometimes longer by centuries. The earliest immigration record for a Mexican person in Alaska dates to the 1910s, according to Sara Komarniski, a postdoctoral fellow in history at the University of Alberta, Edmonton, Canada. However, the largest waves of immigrants in Alaska arrived in the aftermath of the 1964 earthquake. With entire cities to rebuild, Alaska needed construction workers, and Latinos answered the call.

The discovery of oil in the North Slope triggered another surge in the 1970s. During the construction of the Trans-Alaska Pipeline System, Hispanic workers joined the burgeoning restaurant and hospitality industries. Eventually, they sent for their spouses, children and parents. With few exceptions, the older generation grew up speaking only Spanish and almost none was fluent in English.

Spanish is ubiquitous in some states, but not in Alaska, where only 3.5 percent speak it at home. More than a quarter of them speak English “less than very well,” according to the Statistical Atlas, based on information from the U.S. Census.

Many immigrants may not know of services available to bridge the language gap.

“Many people believe that if they ask for a translator, they will be billed for it. But they have the right to request an interpreter,” said Montoya, who is part of the Peer Leader Navigator program. Formed by trained Anchorage residents who speak foreign languages, the program helps “limited English Proficient Communities access health information and resources,” according to the Municipality of Anchorage website.

The lack of an interpreter can be consequential. Montoya remembers the case of a man whose house was foreclosed on because he did not understand a document. “I asked him, ‘if you did not understand the letter, why didn’t you ask for help?’”

Even when people do request translators, some agencies may not provide them. “Clients have told me that they call 211 and ask for Spanish service, and they are told that the agency doesn’t have interpreters,” said Montoya.

The 211 service helps connect Alaskans with “emergency food and shelter, educational opportunities, alcohol and drug treatment programs, senior services and childcare,” among other resources, according to its website, which is entirely in English.

When asked if the agency provides accessible service for non-English speakers, Sue Brogan, 211’s media representative, said that clients can access the webpage using Google Translate, and that the agency is working on a multilingual introductory phone menu.

But the problem goes beyond language, said Marisol Vargas, another Peer Leader Navigator. Originally from Mexico, Vargas said that one issue leads to another when there is a lack of language access.

Recently, a Hispanic family contacted the Peer Leader Navigator program because they could not afford to pay their electric bill. They could not heat the house, and their children could not attend online classes. Looking for a free Wi-Fi connection, the children sat outside the school with their computers. But it rained, and the computers were damaged.

Alaska law forbids gas and electric utilities to stop service due to delayed payments for customers who are over 65, seriously ill, disabled, or who enter into a payment plan.

But, Vargas said, new arrivals might not know that help is available. Not understanding English complicates the problem.

Peer Leader Navigators are helping people to apply for Covid-19 relief funds and vaccines. Vargas said that though the vaccine application is in Spanish, “the translation is not correct. I believe it is a Google translation &mldr; The Clear button is translated as ‘Clara,’” which in Spanish means “white,” “egg white” or “bright.” But not “erase” or “delete.”

Vargas acknowledges that there is good faith on the part of the municipality, but she believes that the problem remains.

Anchorage has traveled “a rough and slow road regarding language access,” said attorney Mara Kimmel, who chairs the board of directors for Welcoming America, a national organization working to build communities that are more inclusive of immigrants and refugees.

Kimmel also chairs the Alaska Institute for Justice’s board of directors. Since 2007, the organization’s Language Interpreter Center has been fighting for language access in Alaska.

At its inception, the Language Interpreter Center “went on a pretty big education campaign … to let people know that if you receive federal funds as an agency, whether you are part of the government or a nonprofit organization, you have to provide linguistically accessible services,” Kimmel said.

Kimmel understands that meeting the requirement can be a challenge.

“We speak over a hundred languages in Anchorage, and it would be impossible to provide written materials or even interpreters on each of those languages all of the time,” she said. “You just have to provide the means for people who are limited in their English proficiency to be able to get basic services.”

To meet that requirement, government agencies and nonprofit organizations make flyers or include information in foreign languages on their websites. The Anchorage Municipality, for example, has Covid-19 information in 19 languages, including American Sign Language.

Providence Alaska Medical Center, the state’s largest hospital, offers both telephonic and video interpretation services at no cost to patients. “This includes translators who will call to update loved ones, who might also be non-English speakers,” said Mikal Canfield, the facility’s senior manager of external communication.

But the stories related by Montoya and Vargas illustrate how those resources do not always reach the communities they are meant to serve.

“It is important for the government and these organizations to educate themselves,” said Kimmel, “because these are basic civil rights issues, just as is the right to be free from any other form from discrimination.”

The problem, from her perspective, is “that even if we have civil rights laws on the books, we still have a lot of racism and animosity in our country. And [lack of] language [access] is a piece of that.”