Saved turtle released back into the wild can now be tracked its thousands of miles migration.
By Ana Lacasa March 15, 2021
Facebook
Twitter
Linkedin
Email 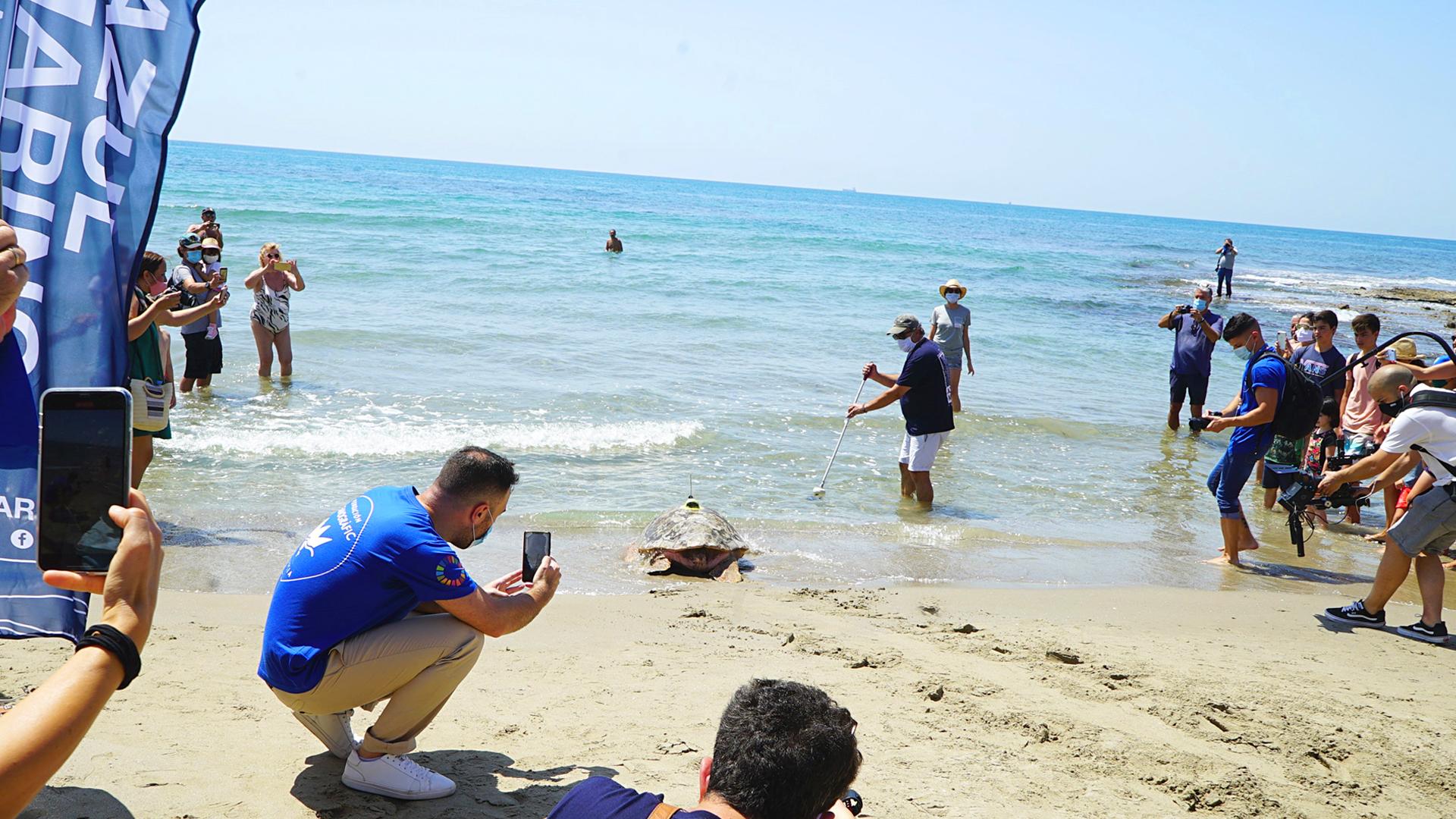 Tue turtle Colomore was released in the sea in 2020 from the Spanish coast. (Oceanografic Valencia/Real Press)

VALENCIA, Spain – Sea Turtles are known to travel long distances to lay their eggs. One such endangered loggerhead sea turtle on its epic odyssey across the Mediterranean from Spain to Greece spent six months before beginning its long swim back.

The 100-kilogram (220-lb) loggerhead sea turtle named Colomera was fitted with a tracking device after it was rescued in 2019 when it became trapped in fishing nets off the coast of Spain.

It was then released back into the sea last year after 12 months of treatment and after having reached the shores of Greece and spending six months there. The reptile has now turned around and appears to be heading back towards the Spanish coast.

“On June 25, the Navy Blue Foundation participated alongside the Oceanogr àfic Foundation in the loose of Colomera, a female Sea Turtle of the species Caretta Caretta with just over 100 kg,” the Azul Marino Foundation wrote on their Facebook page along with a satellite video of the turtle’s journey.

“She was accidentally captured by a trawler and, after recovering in the ARCA of the Sea of the Oceanogr àfic, returned to the sea on a beach in Oropesa carrying a locator in the shell that is allowing us to track her movements.”

The loggerhead sea turtle (Caretta caretta) had become trapped in a fishing net in the waters off Valencia in eastern Spain in 2019. It was suffering from an air embolism believed to have been caused by the nets rapidly dragging it out of the water and was taken to facilities belonging to the Valencia Oceanographic Foundation.

Miguel Gamero Esteban, 40, a biologist working at the Azul Marino Foundation (Deep Blue Foundation) said that she was trapped in a fishing net in 2015 and was released a few months later.

This time, the situation was worse and the health condition of the animal, believed to be around 40-years-old, meant that she needed a longer recovery time.

Finally, on June 25, 2020, Colomera was released back into the sea on Oropesa Beach in the Valencia region. This time, she had a GPS tracking device installed, so conservationists could monitor her.

Since then, they have been following her movements and the oceanographic foundation has now confirmed that it only took her two months to reach the Greek coast.

Her route showed that she continued towards Greece and spent a lot of time in the Gulf of Kyparissia in the western area of the Peloponnese Peninsula where she remained for six months until she decided to head back to Sicily, stopping in the Strait of Messina this time.

“It seems that she tried to go around Sicily at a different location, but she seems to have thought twice about it and has now changed course towards the same route she took the first time around,” Esteban said.

However, the biologist said that these species are great migrators, and she could even end up crossing the Strait of Gibraltar and heading out into the Atlantic Ocean.

She is believed to be large enough to manage this, taking on the strong currents that the Strait of Gibraltar is known for.

Colomera has traveled alone, as is common among her species. Esteban explained that “they only meet during the mating season”.

Regarding the migration habits of loggerhead turtles, the biologist said that they commonly change location depending on the water temperature and sunlight, and they are always on the lookout for areas where there is food as well as places where they can mate and breed.

Loggerhead sea turtles are listed as vulnerable on the International Union for Conservation of Nature Red List of Threatened Species. They face numerous threats these days, especially due to human activity. The biologist said that they are greatly affected by plastic waste found in the seas and oceans.

Esteban said that it is not uncommon for them to die trapped in marine waste made up of plastics, ropes, and fishing nets. They also swallow pieces of plastic which is often synonymous with a death sentence.

Other threats include light pollution which affects the hatching process and accidental fishing.

But there is a glimmer of hope as Esteban said they have recently recorded a slight increase in the number of eggs being laid on Spain’s eastern coast. He said that 10 nests have been recorded in the last nesting season.

The biologist said that this situation is not common, as the normal nesting area is in the eastern Mediterranean, but this year the situation has been surprising, probably because the water temperature off Spain has increased and this has caused more animals to arrive at shores.