Two Arrested In Assault Of Capitol Police Officer Who Died After Jan. 6 Riot 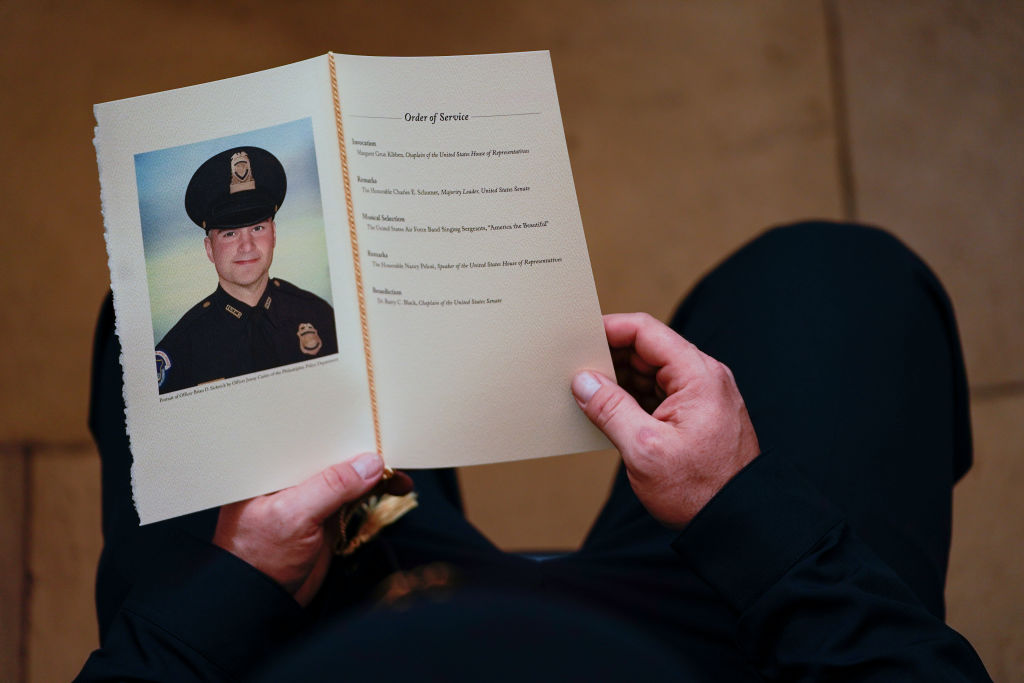 The Federal Bureau of Investigation has charged two people in connection with the death of U.S. Capitol Police Officer Brian Sicknick during the Jan. 6 riot at the U.S. Capitol. They are seen in video from an officer’s body-worn camera using chemical spray against Capitol police who were defending the building.

According to the FBI arrest affidavit, Julian Elie Khater of State College, Pa. was arrested after stepping off a flight at the Newark, N.J. airport. George Pierre Tanios of Morgantown, W.V., was arrested at his home.

FBI Special Agent Riley Palmertree swore out the affidavit in support of charging the pair with crimes including conspiracy, assaulting a federal officer with a dangerous weapon and committing an act of physical violence on Capitol grounds.

They are not charged with causing Sicknick’s death.

Video reviewed by law enforcement show the two suspects discussing the chemical spray, according to the affidavit, with Khater taking a bear deterrent spray from Tanios’s backpack while saying: “Give me that bear sh*t.” Tanios is seen telling Khater to wait. “Hold on, hold on, not yet, not yet. … it’s still early,” Khater replies emphatically, “They just f***ing sprayed me.”

“This verbal exchange between Khater and Tanios, together with Khater’s retrieval of the spray can from Tanios, reveals that the two were working in concert and had a plan to use the toxic spray against law enforcement,” Palmertree wrote.

In apparent retribution for officers using a chemical spray to fend off attackers at the Capitol building, Khater had to be talked out of using it “early.” But at 2:23 p.m., rioters begin tugging on the bike at Chapman’s left, and Khater is subsequently seen spraying the three officers with a canister of chemical spray to force them backward.

It is not known whether the spray attack played a significant role in Sicknick’s death following the Capitol attack.

Veteran U.S. Capitol Police officer Kevin Augustus knew Sicknick from working high-security events like as Joint Sessions of Congress and State of the Union speeches, when all officers are required to be on duty.

According to the affidavit, Khater and Tanios are longtime friends who grew up together in New Jersey. Khater was a former manager and co-owner at a Frutta Bowls franchise in State College, Pa. Tanios owns and operates the Sandwich University restaurant in Morgantown, W.V. He was wearing a black hooded sweatshirt bearing his business insignia during the Capitol attack.

Sicknick collapsed after the attack and died in a hospital on Jan. 7. The coroner’s report is incomplete, and officials are still investigating the cause of death.

The men appeared in court Monday. Tanios attended a procedural hearing via video conference to discuss his legal representation. Prosecutors consider both Khater and Tanios flight risks; they asked judges to keep them in jail until trial proceedings. Tanios will have a bail hearing on Thursday.