Your Car Running Wuff? Astonishing Survival Of A Dog Wedged In A Car Grill 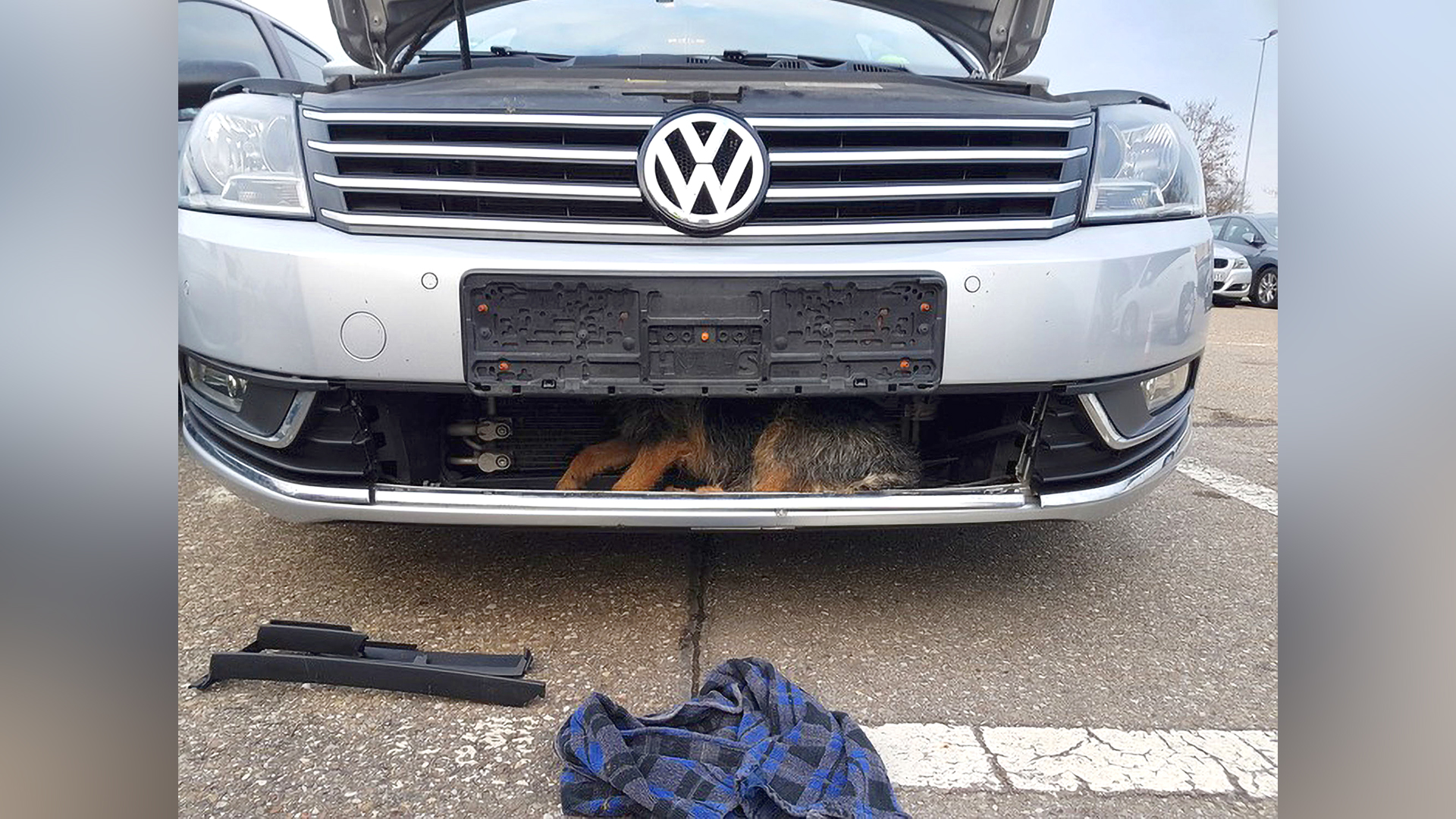 Picture shows the dog who was hit by a car and became wedged inside the grill where it remained for 25 miles before the driver was alerted by a colleague. (Polizeiprasidium Aalen/Newsflash)

SCHWÄBISCH HALL, Germany — In a surprising incident, a dog managed to survive 25 miles trapped inside the grill of a car.

The canine was hit by a car in the city of Schwabisch Hall in the German state of Baden-Wurttemberg on March 4, after which it became wedged inside the grill.

“The dog was probably lucky that it wasn’t four inches to the left or the right,” a local police officer said.

The exact circumstances surrounding the accident are unclear. Local reports suggest that the canine was accidentally “picked up” when it was hit by the car.

The driver, 27, did not realize what had happened and continued his commute to work. The journey, about 40-kilometers long (24.8 miles), even went through a stretch of the freeway before the driver was alerted by a colleague at a parking lot once he arrived at work in the town of Crailsheim.

As per reports, a veterinarian examined the dog, who confirmed it had been unharmed in the incident. It was then returned to its owner, who was tracked down by the local police.

The local police officials said if the dog was trapped in a different position inside the grill, it would have been run over by the wheels. 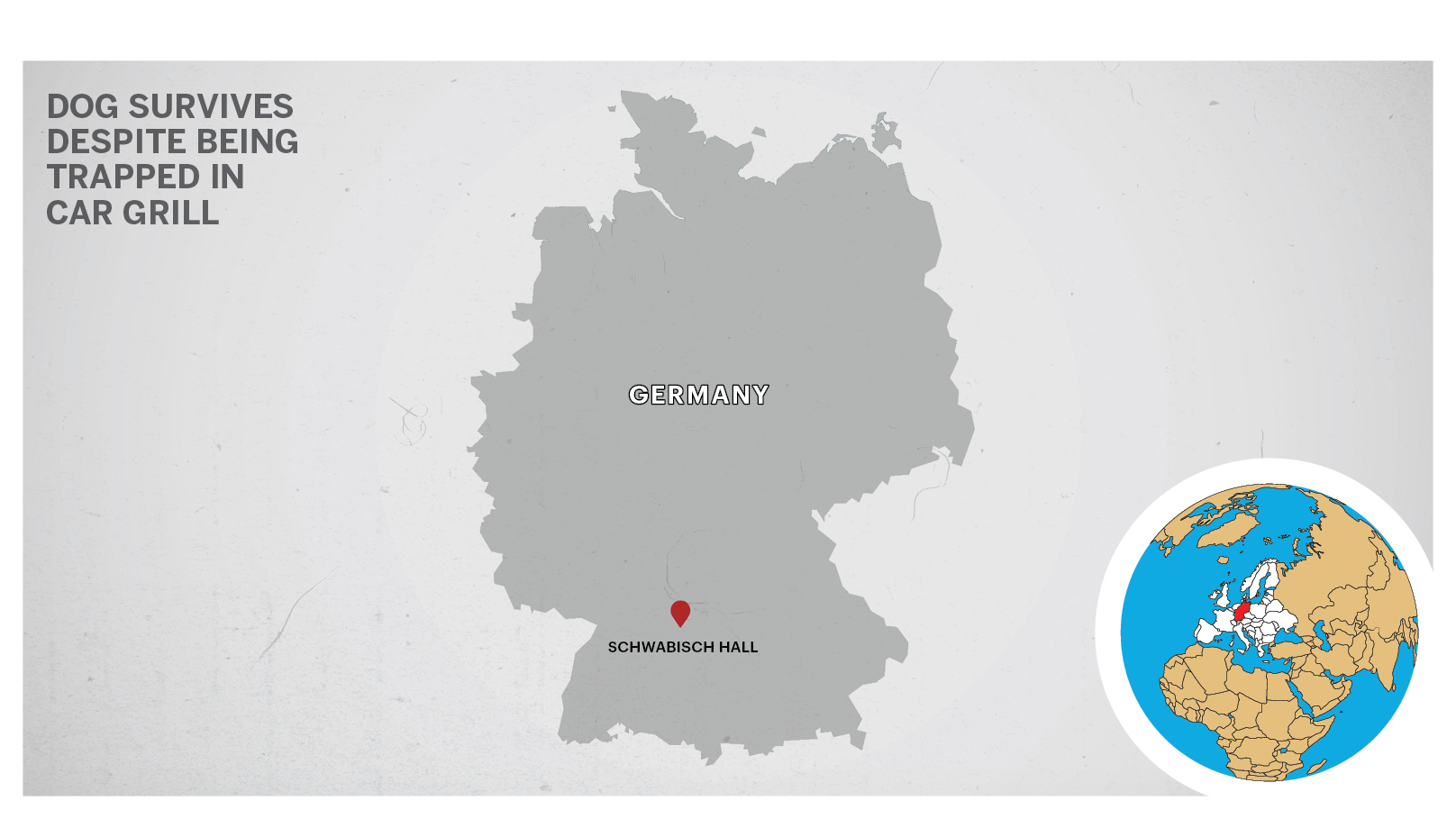 Being hit by a car is a frequent cause of major trauma in dogs. Many dogs suffer head trauma, bone fractures, joint dislocation, internal injuries like bleeding and organ trauma, skin wounds, and more after getting hit by a car.

Accidents involving wild animals continue to be a serious road safety problem in Germany, as per a research article by German insurers’ accident research. However, domestic animals involved in road accidents are still rare.

“There are over 200,000 collisions with deer and other larger wild animals on German roads every year,” the article states. “Although most of these accidents are not serious and are limited to damage to the vehicle’s bodywork, people often die in such accidents.”

The article also states that none of the animal roadkill accident measures have shown results in minimizing these accidents.

“Recommended measures thus far have included scent fences, optical and acoustic reflectors, cutting back the hedges and bushes on the roadside, and signs warning about deer and other animals crossing the road. It came as something of a surprise to find that none of these measures reduce accidents involving wild animals effectively and lastingly.”

The research also noted that an overwhelming majority of accidents involving wild animals occur between 5 AM and 8 AM and between 5 PM and midnight.

In a similar accident in Rotterdam, U.S., in 2019, a pup named Coco was hit by a car and got trapped inside the grill similarly. Coco, too, endured an hour-long journey before the driver found out about her.

Coco had jumped the fence of the house and escaped on the road when the accident occurred.