The challenge is to tackle them in time for the June review.
By Kunwar Khuldune Shahid March 12, 2021
Facebook
Twitter
Linkedin
Email 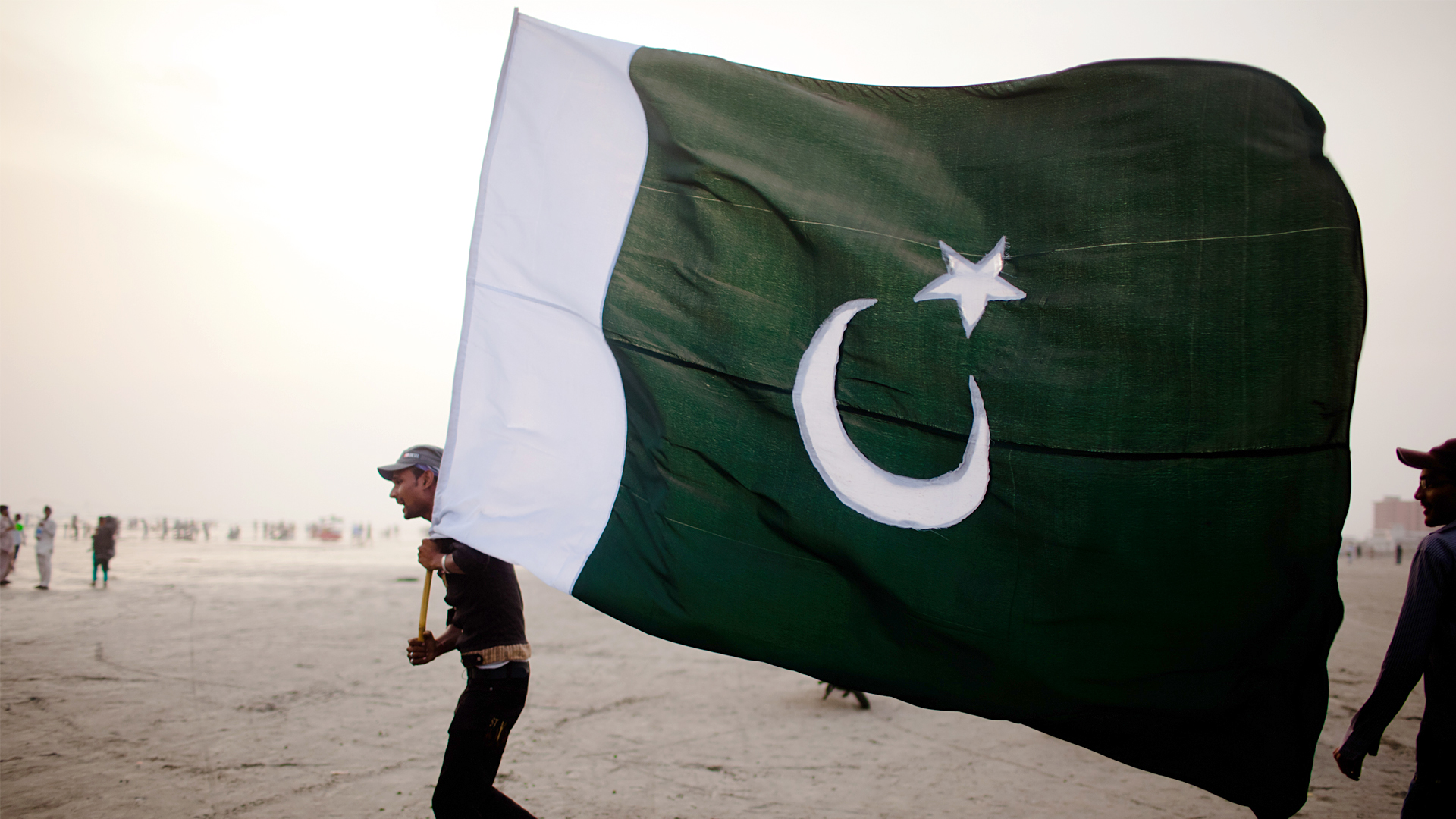 “Pakistan remains under increased monitoring,” said FATF President Marcus Pleyer, while announcing the adjudication, reiterating that Islamabad still needs to fully address three of the 27-points in the action plan.

Last month’s ruling marks three years of Islamabad’s return to the FATF grey list. While Pakistan was formally reinstated in the list in June 2018, the announcement had been made in the annual Paris meet that year.

Over these three years, Pakistan has gradually increased its compliance with the FATF plan. By February 2020, Pakistan had ‘largely addressed’ 14 of the 27 action items, with the number standing at 24 last month ahead of the next review in June.

The recognition of the increasing compliance with the FATF guidelines has been touted as a success by the Pakistan government.

“The country has achieved significant progress,” said Hammad Azhar, Industries and Production Minister and the chairman of Pakistan’s FATF Coordination Committee, while addressing the media after last month’s ruling. 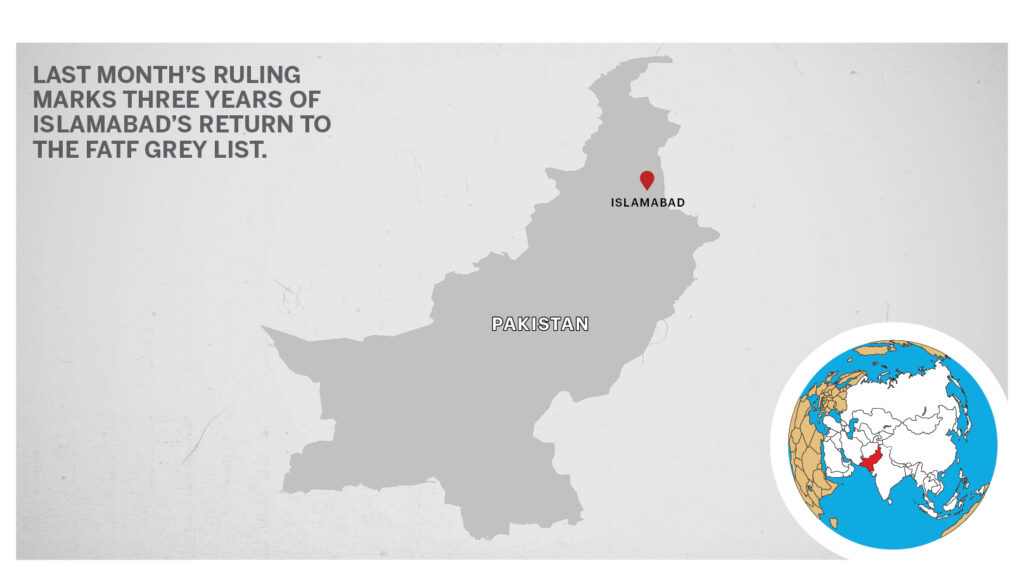 The three remaining FATF pointers yet to be fully addressed, ask Pakistan to demonstrate that “terror financing investigations and prosecutions target persons and entities acting on behalf or at the direction of the designated persons or entities; terror financing prosecutions result in effective, proportionate, and dissuasive sanctions; and demonstrating effective implementation of targeted financial sanctions against all 1,267 and 1,373 designated terrorists, specifically those acting for or on their behalf.”

The FATF points deemed largely unaddressed 12 months ago, but recognized as part of the progress made this year, include remedial actions in anti-money laundering and combating the financing of terrorism; cooperation of authorities; cross-border currency controls; enforcement against targeted financial sanctions, and depriving designated persons of facilities, services, and other resources.

This recognition has enhanced Pakistan’s hopes of making it to the white list, with government officials maintaining that the country is unlikely to be blacklisted.

“The FATF secretariat said that blacklisting was not an option because the country has achieved significant progress,” Azhar said in the press briefing.

All the FATF’s recommendations vis-à-vis the banking sector and financial shortcomings have been ruled as addressed. The FATF found loopholes in Pakistan’s banking system that were exploited by proscribed groups for transferring money to fund militancy.

Being on the grey list puts the country’s financial sectors under scrutiny, jeopardizing ease of doing business where Pakistan ranked 136 in the world until last year according to the World Bank, with the state moving to 108 in this year’s ranking.

“Designated terror groups and their members can no longer use bank accounts or transfer funds as easily as they could even two or three years ago,” Salman Shah, financial advisor to the ruling Pakistan Tehreek-e-Insaf government, told Zenger News.

Money laundering and undocumented transactions were facilitated in the country by the fact that Pakistan’s economy has been largely informal and cash-based. Even the established banks were found to be compromised with the Habib Bank of Pakistan being forced out of New York in 2017 owing to transactions with the al-Qaeda-linked bank Al Rajhi based in Saudi Arabia.

Shah believes that the digitization of the banking system has made Pakistani banks more robust to counterterrorism at home and overseas.

“Over the past year, digitization has also increased owing to Covid-19 and the government encouraging online banking. Now, improvements are needed are in the legal system, with regard to the prosecution of terror groups. That might take a long time, but we can show sufficient improvement in time for [the review in] June,” said Shah.

Pakistan’s prosecution of designated terror groups has remained the primary stumbling block since the country’s return to the grey list in 2018. Days before the Paris meet in 2018, then President Mamnoon Hussain issued the Anti-Terrorism Ordinance to sanction Hafiz Saeed. A US-designated ‘global terrorist’ also sanctioned by the UN, Saeed is the founder of Lashkar-e-Taiba and Jamaat-ud-Dawa, and the primary accused in the 2008 Mumbai attacks. Months later, the Saeed-affiliated Allah-o-Akbar Tehreek, an offshoot of the Milli Muslim League, contested the 2018 general elections in Pakistan.

The status of Saeed has been regularly questioned by the FATF at plenary meetings, with Pakistan customarily announcing action against him ahead of counterterrorism reviews. Saeed was given a five-and-a-half-year prison sentence in terror financing cases days before the FATF meeting in February 2020. Saeed was given another five-and-a-half-years in a separate case weeks after the FATF review in October.

Pakistan has also been accused of inaction against Masood Azhar, the chief of Jaish-e-Mohammad (JeM), who has also been designated as a global terrorist by the UN. The global terrorist tag came months after a JeM claimed terror raid on security personnel in the Pulwama district of the Indian-administered territory of Jammu & Kashmir had led to an aerial dogfight between India and Pakistan in 2019. In January, a Pakistani antiterrorism court asked the local counterterrorism department to arrest Azhar in connection with terror financing.

Lieutenant General Talat Masood, a former secretary at Pakistan’s Ministry of Defense Production, believes the Pakistani state is indecisive against terror groups because it “fears backlash”.

“The government doesn’t take action against [designated terrorists] because they think this will invite a violent response and incidents of terrorism. Also, Pakistan doesn’t want to take action suddenly, and prefers to do it over a period of time,” he told Zenger News.

“But I don’t think we should waste more time. We should be resolute in taking action against them. It is in Pakistan’s own interest and will invite more investment. It’s not just [about getting off] the FATF grey-list, [it’s also about] safeguarding economic interests and improving reputation,” Masood said.

Pakistan is facilitating the U.S. and Afghan government’s talks to mainstream the Taliban, which Masood believes “impacts Pakistan’s status on the FATF grey list” even if indirectly.

Even domestically, the Pakistani military establishment is accused of safeguarding jihadist and Islamist groups and underdoing a process of their political mainstreaming. Critics say it is an offshoot of this policy that a Saeed-affiliated party contested general elections. The radical Islamist Tehreek-e-Labbaik Pakistan, which gained the third most votes in the most populous Punjab province in 2018, is also said to be propped up by sections of the army.

“Saeed is convicted but there is no confidence that he has been abandoned. There seems to be greater pressure on Azhar and tightening of what he says but not abandoned as yet,” security analyst Ayesha Siddiqa, who has written “Military Inc. — Inside Pakistan’s Military Economy”, told Zenger News.

“The mainstreaming they talk about is [about] control and not abandonment. A decision to abandon friendly militants has not been taken as yet,” she said.

While Siddiqa believes Pakistan only being left with three unaddressed issues from the FATF action plan counts as a “forward moment”, she doesn’t think Pakistan can address these points in time for the June review.

“I think Pakistan would like if FATF was political than technical, and it could negotiate with someone and convince them of the mainstreaming and controlling strategy,” she said, adding that, “also, I think there is no clear understanding domestically of FATF which is essentially presented as a means of twisting Pakistan’s arms.”

A surprising ruling came on the terror front in January when Pakistan’s Supreme Court ordered the release of Ahmed Omar Saeed Sheikh, the main accused in the kidnapping and murder of journalist Daniel Pearl. Last year, the Sindh High Court had overturned Sheikh’s death penalty. The announced release of Sheikh, a former JeM member and the right-hand man of Azhar, has posed question marks over Pakistan’s counterterrorism policy.

“They probably tried to release him, but it didn’t work,” said Siddiqa, slashing further doubts over the claims that the Pakistani military establishment is looking to abandon the use of jihadists for its strategic interests.