Funds raised to get her a dose of the world’s costliest medication for spinal muscular atrophy.
By Jyoti Shelar March 12, 2021
Facebook
Twitter
Linkedin
Email 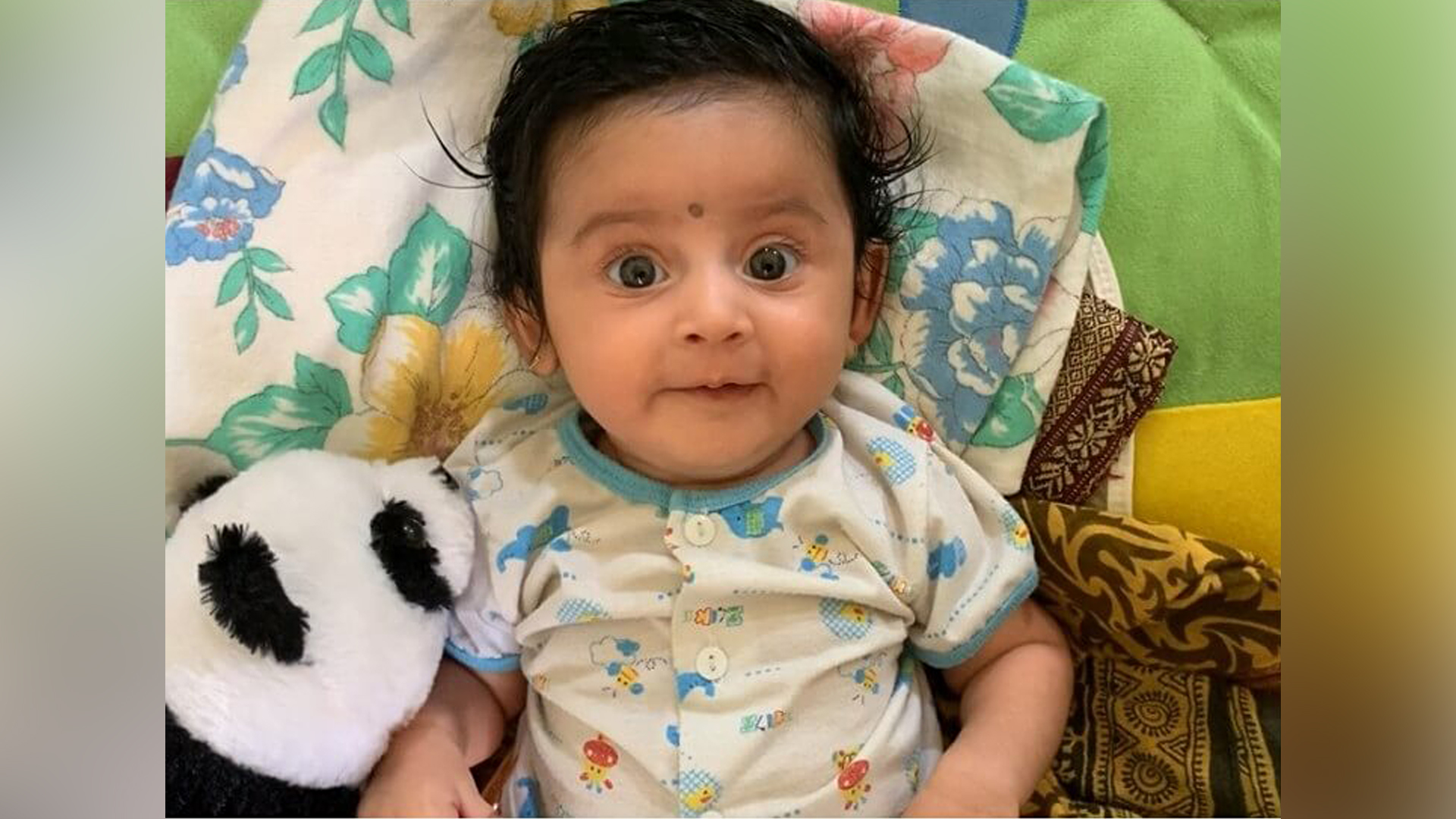 Teera suffers from a rare genetic disease called type 1 spinal muscular atrophy that affects one in 8,000 newborns the world over. The cost of the medicine that was administered was INR 16 crores ($2.2 million).

“As middle-class working professionals in India, most of us barely make INR 1 crore ($137,432) in our lifetime,” father Mihir Kamat told Zenger News. “Raising INR 16 crore ($2.2 million) was impossible for us. But there was no way we could let our baby go and decided to try everything.” 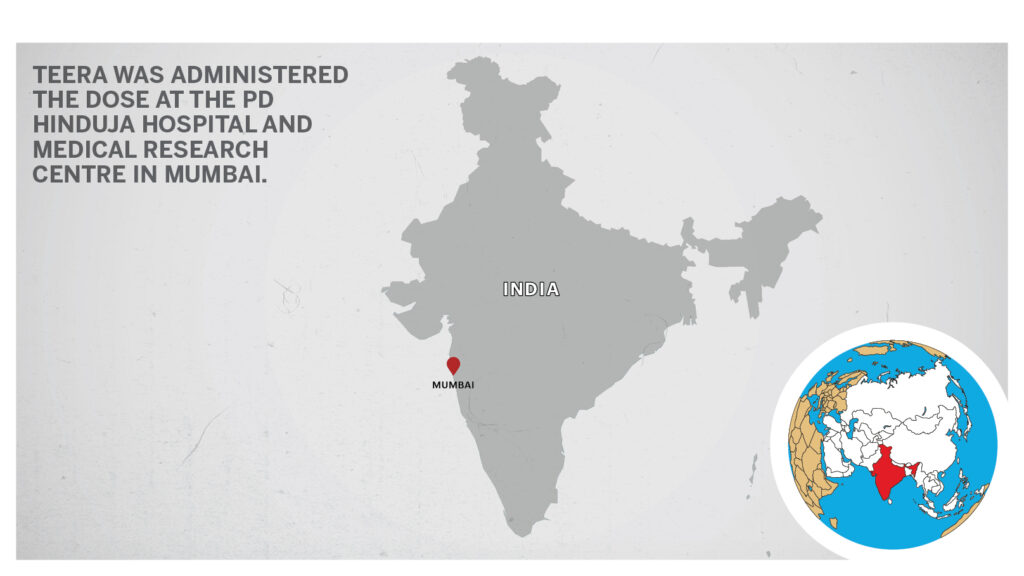 The disease, caused by the lack of a functional Survival Motor Neuron 1 or SMN1 gene, leads to muscle weakness and progressive loss of movement. Most children affected with the disease die before turning two.

Teera’s parents began noticing the symptoms soon after her birth in August 2020. She had trouble swallowing, breastfeeding, and breathing. During one of her immunizations, she started to choke on drops of vaccine and her hands seemed to have no control. A neurological consultation soon confirmed spinal muscular atrophy.

The parents found out that Zolgensma — the gene therapy that could save her — was out of their bounds. The therapy was developed by US-based AveXis, now known as Novartis Gene Therapies.

The company has a managed access program where patients selected through a lottery get the only USFDA approved gene therapy for the disease on compassionate grounds. 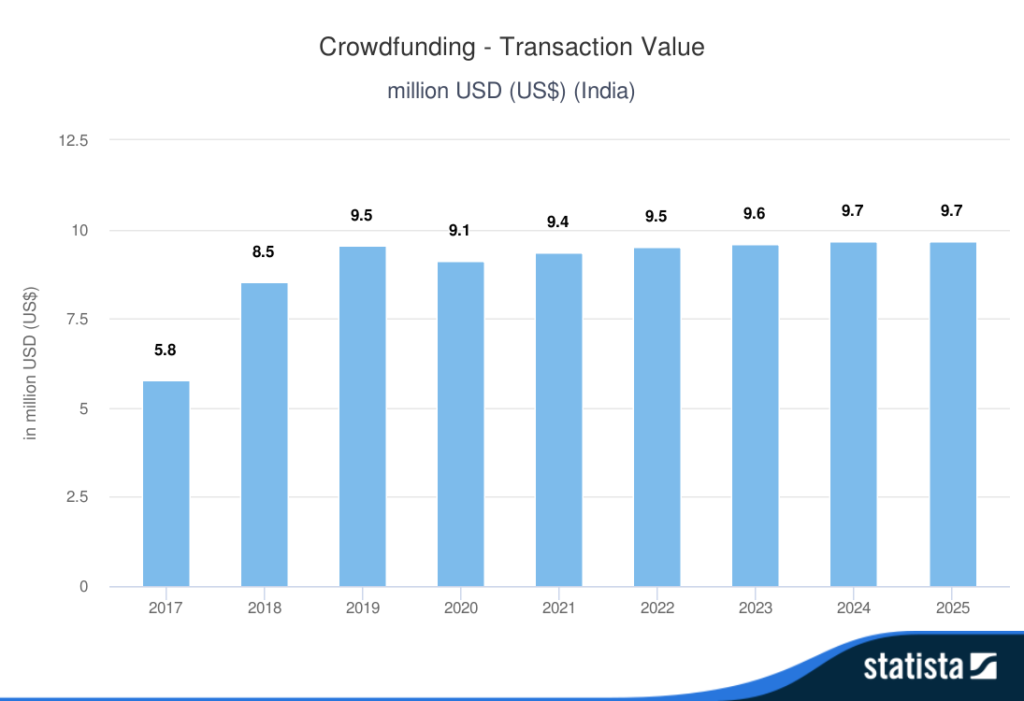 In November 2020, the 35-year-old IT professional and his wife Priyanka, who is a freelance illustrator, began a fundraising initiative on ImpactGuru, a crowdfunding platform.

“Teera won’t make it past her 2nd birthday without your help!” they wrote in the appeal. It touched a chord with people and donations began to pour in. But by Dec. 31, 2020, only 25 percent of the required amount came in.

“We kept updating about our struggle on social media. We also received a celebrity shoutout from actor Abhishek Bachchan and articles in local media helped, too,” said the father, adding that contributions increased rapidly in January this year and within 27 days of that month, they had collected INR 14.93 crores ($2 million). They raised the remaining amount from another crowdfunding platform called GoFundMe.

The struggle continued as the parents were to pay 35 percent import duty and goods and services tax on the drug and that would mean extending the crowdfunding period. They appealed to the Indian government and, in a grand gesture, the government waived the taxes.

“The wait for the drug was nerve-wracking,” said Kamat. By that time, Teera’s condition was deteriorating, and she had to be put on a ventilator.

“She suddenly turned blue. We rushed her to the hospital where she flat-lined four times,” said Kamat. A sudden cessation of heart contractions or brain wave activity is indicated by a flat line on the monitor. Doctors even prepared them to let her go, but the parents put their foot down.

“At that time, the drug would take at least two more weeks,” the father recalled.

On Feb. 25, the drug arrived in Mumbai at the PD Hinduja Hospital and Medical Research Centre, the only center in the city with permission to administer it. The next day, Teera was administered 30 mili liter of the drug intravenously.

“The drug delivers the missing SMN 1 gene to the patient and binds the nerve cells and starts producing the deficient protein,” Neelu Desai, a pediatric neurologist at the PD Hinduja Hospital and Medical Research Centre, told Zenger News.

“Teera should gradually be able to gain control over her movement but that would take six months to years. We are hopeful that the drug will provide her immediate relief in terms of allowing her to breathe without the non-invasive ventilator.”

Only about 10 to 12 children in India have received Zolgensma but all except Teera have got it under the managed access program, according to Desai.

Teera’s case has taken crowdfunding to an all-new level. “It’s record-breaking,” said Piyush Jain, the co-founder, and chief executive officer of ImpactGuru. “It is the largest crowdfunding raised in India for a single patient.”

Donations for Teera came in from nearly 50 countries — the highest from India followed by Canada. The last highest amount raised by ImpactGuru before this was INR 2.5 crores ($343,532) for a teenager suffering from advanced cancer.

It is hard to predict what worked in Teera’s case. “Different campaigns have different trajectories,” said Jain. “Sometimes, the donors relate to the disease of the patients, sometimes they connect with the community or the state, perhaps. The motivation to donate differs. In Teera’s case, the parents were very public with their struggle, they created customized social media pages, and that also had a tremendous impact.”

The crowdfunding market has grown immensely in India over the years. Transaction value in the crowdfunding segment is projected to reach $9.4 million in 2021, according to Statista.

ImpactGuru has raised over INR 1,500 crores ($206 million) from more than 500,000 individuals and organizations for various causes. It has 25 ongoing fundraisers for patients with spinal muscular atrophy. Other leading platforms in India like Milaap and Ketto have also raised over INR 1,100 crores ($151 million) for more than 200,000 fundraisers hosted by them each. Medical causes top the chart.

Teera’s father said it was heart-warming to witness contributions from strangers. “There were donations of as little as INR 10 ($0.4) to as high as INR 5 lakh ($6,870). The latter amount was donated by Bachchan,” said Kamat.

The parents are now focused on Teera’s rehabilitation as she has to learn to sit, move, and take control of her body.

To date, 170 babies and children around the world have received Zolgensma free-of-charge, according to a Novartis spokesperson. “Through the globally managed access program in 2020, we have provided free access to this life-changing therapy to families across nearly every continent and spanning 24 countries,” the spokesperson told Zenger News in an email response. “More than 80 percent of doses were delivered after the pandemic started, including the first-ever spinal muscular atrophy gene therapy administration in countries such as Chile, Mexico, Tunisia, Belarus, India, Malaysia, United Arab Emirates, and Vietnam.”

The spokesperson said Zolgensma is consistently priced worldwide, however, “the final pricing decisions are determined at the local level. The wholesale acquisition cost of Zolgensma is $2.1 million — less than 50 percent of the current 10-year cost of the current standard in chronic spinal muscular atrophy therapy in the U.S. Over time, it is expected to save costs in the healthcare system for the treatment and care of patients with spinal muscular atrophy, and we are partnering flexibly with payers to ensure access and affordability.”