The mother of the youngster was also nearby which made the rescue process even more complicated.
By James King March 11, 2021
Facebook
Twitter
Linkedin
Email 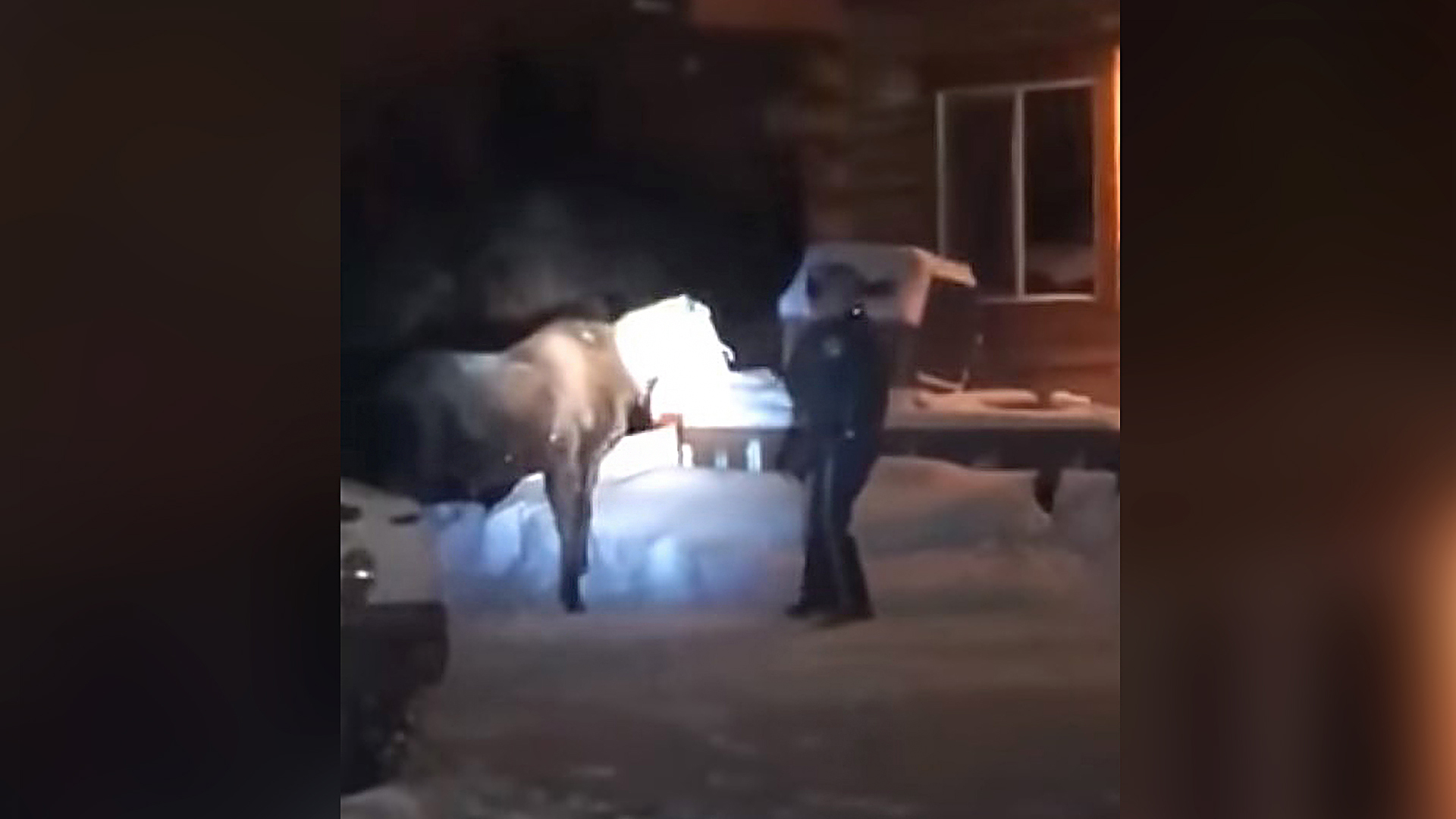 Alaska State Trooper trying to remove the bag stuck on the head of a young moose in Fairbanks, Alaska. (@AlaskaStateTroopersOfficial/Newsflash)

FAIRBANKS, Alaska — An Alaskan state trooper risked his life to take off a plastic bag from the head of a young moose that was unable to see and was injuring itself in the backyard of a house in Alaska.

The Alaska State Troopers were dispatched to the location after receiving a call reporting the young moose had a bag stuck to its head. The caller said the moose was repeatedly running into a house and becoming increasingly agitated as it could not break free

The troubled moose risked harming itself and others as it ran around trying to free itself from its predicament in the city of Fairbanks, Alaska.

“While the situation may appear to be comical, a moose can weigh up to 1,500 pounds (680 kilograms) and their attacks can quickly become fatal,” wrote the Alaskan state troopers in a Facebook post along with a video of the rescue. “Just as the caller did this week, if you ever see a big game animal in distress, call your local law enforcement agency.”

The troopers said the mother of the youngster was also nearby which made the rescue process even more complicated. Several troopers were able to assess the situation before one of them bravely volunteered to remove the bag for the animal’s head and the two moose went on their way into the wild.

The trooper was lauded by the citizens on social media.

“Wow, what an experience that was. Happy no trooper got hurt,” Violet Hatzenbuehler, a Facebook user, commented on the post.

“Great job, trooper!!!!! I’m told that was a baby. Thank you for doing the right thing albeit dangerous!” wrote Mary Gomez. 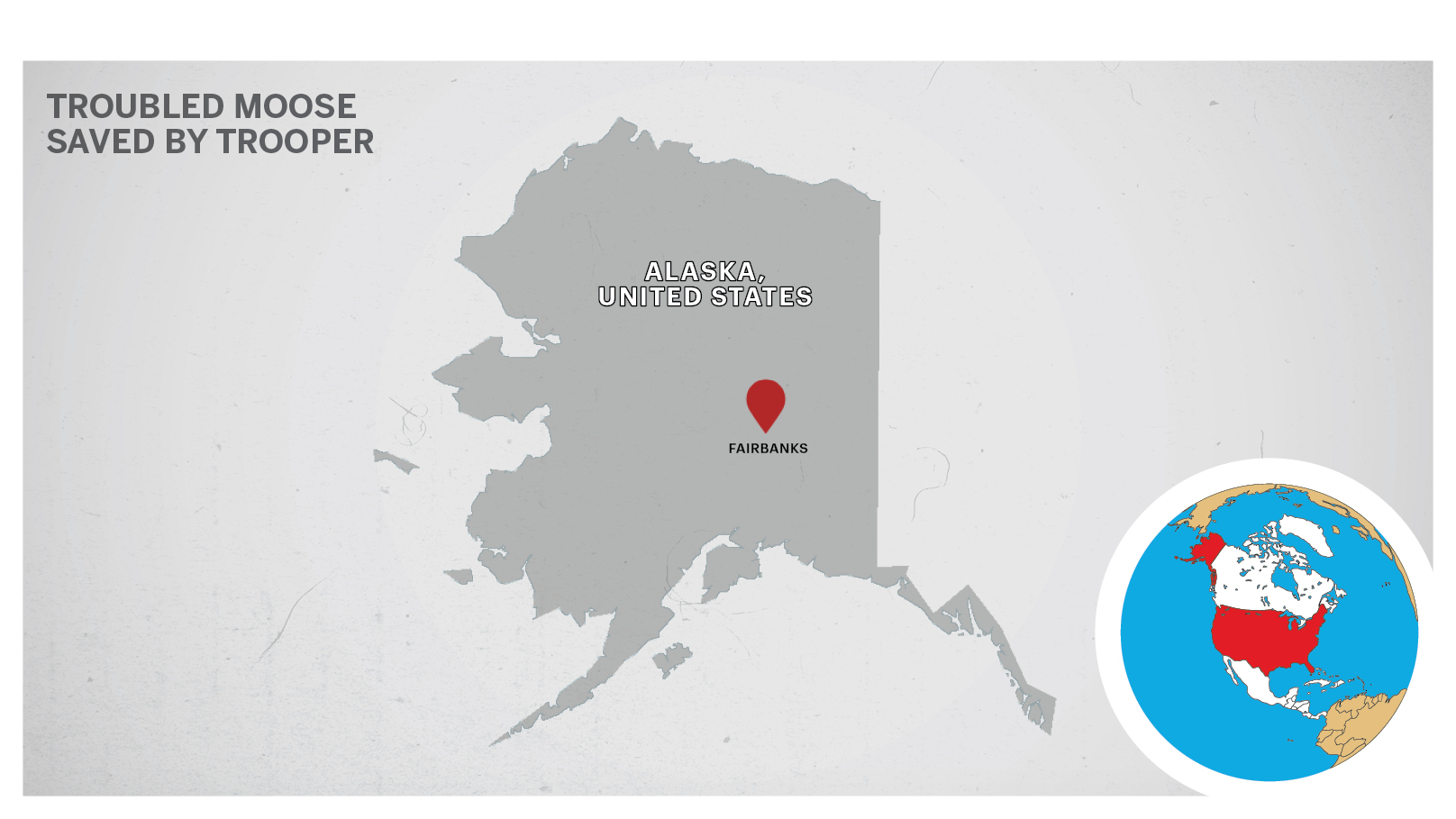 Spotting a moose, the largest of all dear species, in backyards and gardens of Alaskan houses is a common phenomenon.

Earlier this year, on Jan. 1, the state troopers located a moose entangled in wires in the backyard of a house.

“Catching a glimpse of a bull moose frantic and entangled in a swing will cause even a lifelong Alaskan some concern,” reads the Facebook post by the state troopers. “On Saturday, Jan. 1, Wildlife Troopers assigned to Northern Detachment responded to a moose entangled in a rope swing in the backyard of a Wasilla residence. Wildlife troopers and state troopers spent over an hour and a half working to free the severely entangled 1,000-pound animal and succeeded after several attempts.”

While the antlers of a moose can be easily spotted, they also become a cause of concern for the animal as they get tangled easily. The antlers of a male moose can spread 6 feet (182 cm) from end to end. While a moose is not usually aggressive towards people, it can attack and be deadly if provoked.

Last year, the Alaska Dive Search Rescue and Recovery Team rescued a moose from the middle of the King river outside Sutton.

“Known as moose across North America, but called elk in Europe, they are the largest member of the deer family. They can range in color from golden brown to almost black, depending on the season and the age of the animal,” as per the Alaska Department of Fish and Games.

While citizens call the state troopers or rescue teams out of concern, some experts believe the concern does more harm than good to the moose.

“Every year, well-meaning people doom moose calves to an unnatural life in confinement – or kill them accidentally – by ‘rescuing’ them,” reveals a report titled ‘Orphaned Moose Calves are Rarely Orphaned’ by the Alaska Department of Fish and Games. “It’s dangerous and unnecessary. This is especially a problem in Anchorage, where lots of people and moose coexist. This means that cow moose and calves must also contend with cars, roads, fences and dogs.”