India, Pakistan Agree To A Ceasefire But Broader Talks Elusive

The two nations have shied away from stating their core issue of Kashmir in a joint statement. 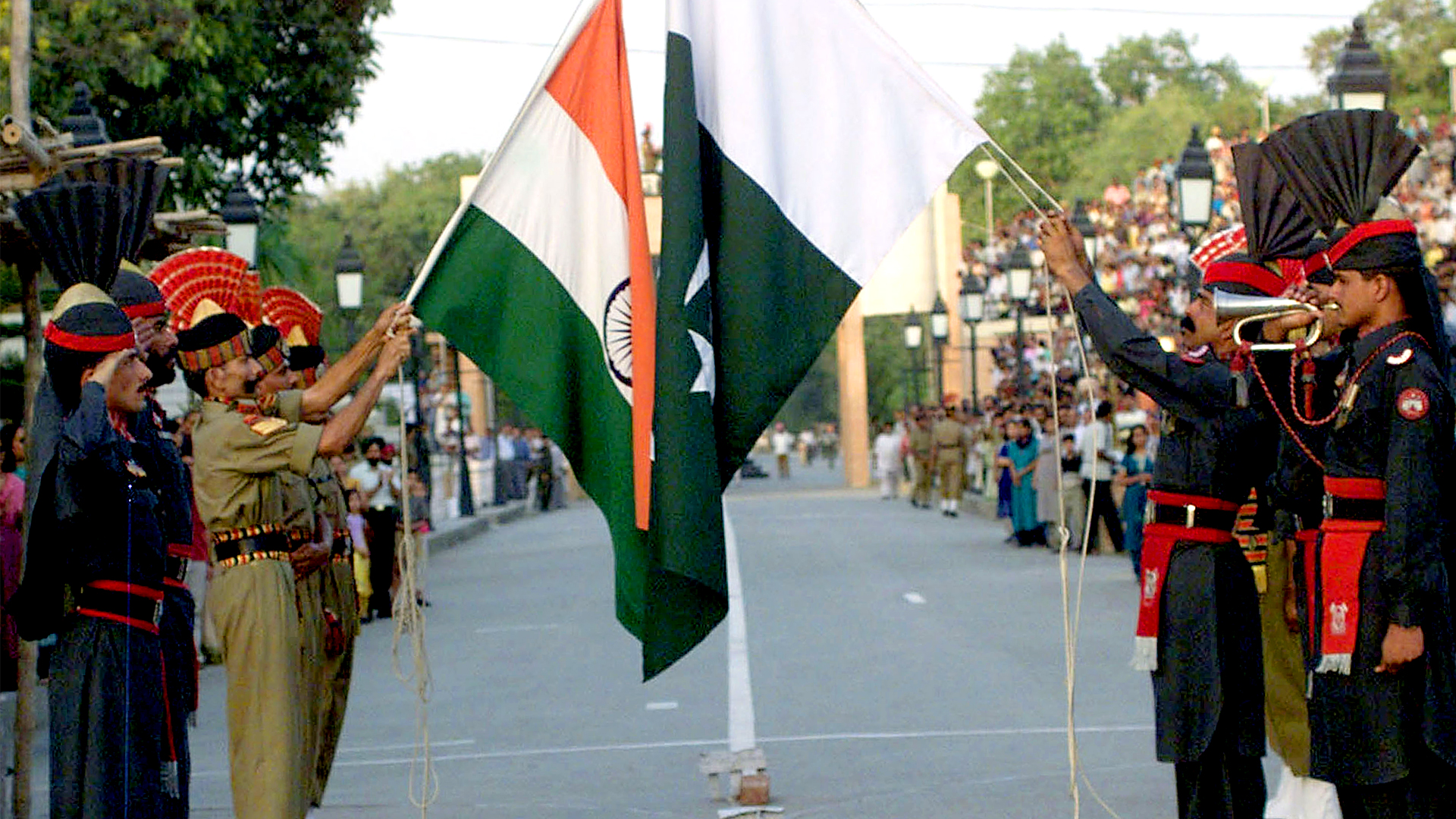 India and Pakistan militaries have agreed to a ceasefire along the Line of Control (LoC), the unofficial border separating the parts of Kashmir administered by the two nuclear-armed South Asian nations. Both have not clarified much apart from a joint announcement stating they would observe the 2003 ceasefire.

In the joint statement, the directors-general of military operations of Pakistan and India agreed to “strict observance of all agreements, understandings and cease firing along the Line of Control.” The commanders also “agreed to address each other’s core issues and concerns which have a propensity to disturb the peace and lead to violence”.

While peace has been established along the LoC for now, the development is unlikely to lead to broader talks, particularly on the issue of Kashmir.

Discussing the LoC ceasefire more than two years after New Delhi’s decision to repeal the semi-autonomous status of Jammu & Kashmir that it administers is not surprising.

Analysts believe the agreement was likely driven by military concerns at the theater level as both have been reporting heavy casualties. 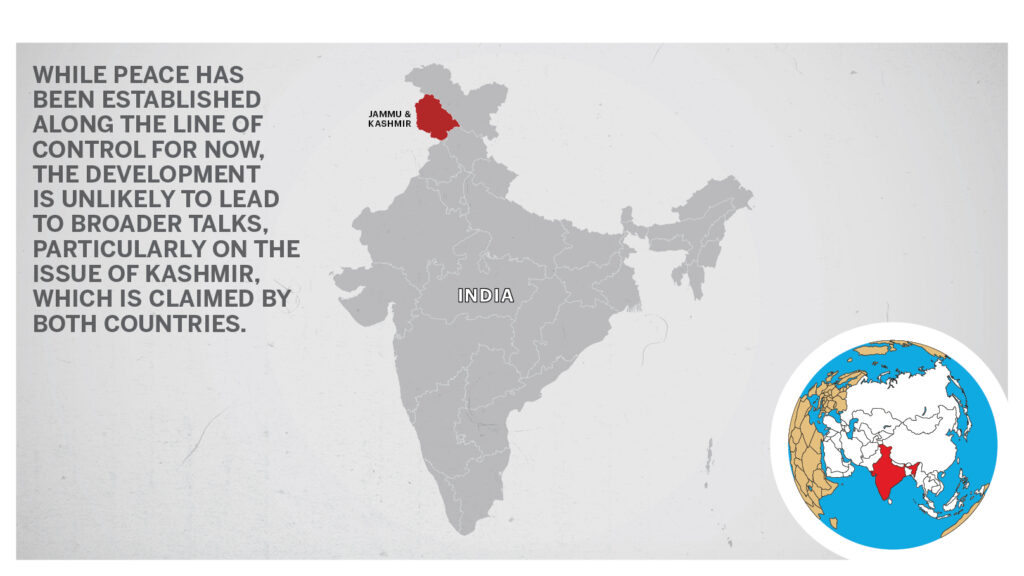 “There has been heightened military activity along the LoC — probably the highest since the last agreed ceasefire in 2003, and there’s a mutual feeling that this could get out of hand and, accordingly, it needs to be deescalated,” Claude Rakisits, a professor at the department of international relations at the Australian National University, Canberra, told Zenger News.

Echoing Rakisits, Michael Kugelman, senior associate for South Asia at the Wilson Center, Washington, says the prime explanation could be simple: “Both sides recognized that the border violence was getting out of control, and they decided to do something about it.”

“There’s also something to be said for trying to remove a major security headache at a moment when both sides are confronting a pandemic and serious economic stress,” Kugelman told Zenger News.

While the decision was cited as an agreement between India and Pakistan’s border forces, it could not have happened without the approval of policymakers on both sides. From India, Prime Minister Narendra Modi’s national security advisor Ajit Doval lead the talks. It is unclear who represented Pakistan.

“There are also reputational factors that could be at play. Pakistan is keen for the world to see it as a responsible and peaceful actor along the border. And India is unhappy about the negative international press coverage it’s gotten of late. In effect, a ceasefire can help boost each side’s global image,” Kugelman said.

For India, an “additional motivational factor is, of course, China, which has been causing them grief in Ladakh since May last year. The last thing the Indians want to have to deal with is two separate fronts by opponents that are strategic allies,” said Rakisits.

Whatever the motivations, the agreement is not likely to change the dynamics of the conflict between the two countries that revolves around the issue of Kashmir.

For decades, Pakistan has claimed that a portion of Kashmir is a disputed region that needs to be discussed. India, on the other hand, has nullified all of Pakistan’s claims. While India may have repealed the semi-autonomous status of Jammu & Kashmir to convey to Pakistan that the region’s status is not going to be up for discussion, Islamabad remains knotted to the conflict.

One of the reasons that the joint statement didn’t mention the issue of Kashmir is because the countries wouldn’t be able to find language that satisfies their respective positions on the conflict.

“I don’t think we should overstate the impact this ceasefire will have on Kashmir. Islamabad insists that any progress will require India to take steps toward giving self-determination to Kashmiris,” said Kugelman.

“But this is a non-starter, and India’s revocation of Jammu & Kashmir’s autonomy essentially takes Kashmir off the table as a discussion point, from India’s perspective. That said, the ceasefire will bring welcome relief to Kashmiris affected by violence, and that’s certainly something to praise,” he said.

For Syed Ali Zia Jaffery, a research associate at the Center for Security, Strategy and Policy Research at the University of Lahore, “The ceasefire is merely a confidence-building measure, which will not change anything about the Kashmir issue. In other words, the agreement is not a precursor to a dial down of rhetoric on Kashmir. No headway is possible absent India’s wholehearted efforts to change its policy direction in and on Kashmir.”

On the Pakistan side, some Kashmir-focused non-state actors, such as the Lashkar-e-Taiba (LeT) and the Jaish-e-Mohammad (JeM), may not be happy with the ceasefire.

Since Pakistan has agreed to the ceasefire, “I’m certain that the Pakistan military will have put in a hard word with the leaders of these groups to not do anything that could derail it. I don’t see any credible spoilers on the Indian side, which would want to derail the recent agreement,” said Rakisits.

Even if militant groups like the LeT and JeM were contained, the bilateral relationship is so tense that “it takes a bullet to violate the agreement,” said Jaffery. “The dynamics of the LoC and the Working Boundary, for that matter, weaken agreements like this.”

Analysts believe that there’s a major opportunity for the countries to build on the momentum of the ceasefire and pursue additional cooperation in areas like trade and fighting the Covid-19 pandemic. The question is whether each side has the political will to do so.

“Despite the ceasefire, the relationship remains quite tense, and even with the new goodwill emerging from the truce, trust is elusive and so it will be tough to commit to cooperating on broader issues,” said Kugelman.