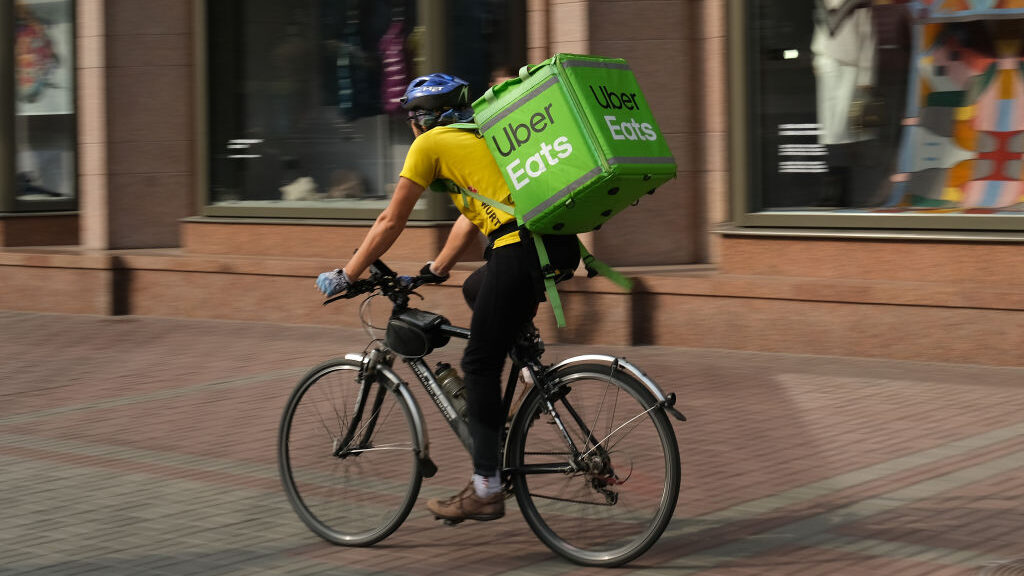 Tighter accounting of revenue from third-party, app-based vendors, such as Uber, Airbnb and DoorDash, could force some to pay more taxes by having to document additional income. (Sean Gallup/Getty Images)

Congressional Democrats slipped a last-minute tax provision into the pandemic relief bill that may complicate how millions of gig economy workers report their incomes.

The measure, the final version of which passed Wednesday, would not increase the tax rate for such workers, and experts describe it as a sensible move to simplify rules. However, they also acknowledge tighter accounting of revenue from third-party, app-based vendors, such as Uber, Airbnb and DoorDash, could force some to pay more taxes by having to document additional income.

The addition is intended to offset some costs of the massive $1.9 trillion American Rescue Act, but it’s estimated to garner just $8.4 billion over 10 years.

The measure drops the reporting threshold from $20,000 and at least 200 transactions to $600 for those earning extra cash on the side, as well as the companies that pay them.

Currently, those making less than $20,000 by occasionally renting out property or delivery driving have to pay taxes on that income but do not have to detail the source or associated business expenses. The tech-based companies connecting such earners to customers do not have to supply a 1099-K tax form to help them calculate reportable income.

Once the COVID-19 relief bill is signed into law, those paying or receiving more than $600 must declare what the IRS calls “third-party network transactions,” squaring the rules for sharing economy workers and independent contractors.

The change applies to tax returns filed after the end of this year and is estimated to generate $1.2 billion more a year, the equivalent of $600 to $800 more for each such worker.

The bill comes as more than 10 million Americans rely on unemployment aid and many are underemployed and making ends meet with odd jobs, such as driving for Uber. Some economists say more than 50 million U.S. workers count on income from at least some side work.

The move prompted backlash from app-based firms, which will have to swallow the costs of providing tax preparation forms, as well as advocates for independent contractors and Republican lawmakers.

Carl Holshouser, senior vice president at TechNet, a firm that represents 80 companies and describes itself as an advocate for the “innovation economy,” also blasted the changes.

“This last-minute addition to the bill adds a significant burden to gig economy workers and small businesses at the worst possible time,” he said in an email statement.

“The priority should be enabling greater access to flexible earning opportunities as we continue to recover from the pandemic, not adding an additional tax and bureaucratic burden to workers and businesses at a difficult time.”

Katie Vlietstra, spokeswoman for the National Association for the Self-Employed, said her organization was most concerned about the process after learning of the changes 48 hours in advance.

“You’re instituting a significant change in the middle of the tax year without understanding how a lot of people are going to be affected by it,” Vlietstra said. “In March 2021, in the middle of a pandemic, is it the right policy at the right time, without a robust debate?”

Tinkering with the laws complicates, not simplifies, taxes for independent workers, she said.

Advocates for tax reform said they have long called for the changes, which make reporting rules uniform for all gig workers by requiring third-party earners to report income in the same way as traditional independent contractors, freelancers and consultants.

The Government Accountability Office recommended the change after reporting in May that such workers “may not understand all of the tax obligations of their new job.”

“The change could also enhance IRS’s ability to ensure that these workers are correctly reporting their income,” said the GAO, the investigative and oversight arm of Congress.

Because the vendors don’t deduct taxes from contractors’ payments or supply tax preparation paperwork, workers are left to guess how much tax to pay. That means they often underreport income, but also deduct less than their fair share of business expenses, said Garrett Watson, a senior policy analyst at the Tax Foundation.

“It is likely that they are underreporting,” she said, echoing estimates that between 1.5 million and 2 million Americans would be affected by the change.

“It helps workers understand what they owe,” Steward said. “The vast majority want to pay their taxes. They are in a situation where doing the right thing is really hard.”

It’s unclear how much revenue is lost as a result, something experts call the tax gap.

The Internal Revenue Service estimates the uncollected gap at $110 billion a year, a quarter of which stems from business income, Watson said. He added that Treasury Department researchers have found 60 percent of gig economy workers don’t receive the proper tax reporting forms, and 13 percent of those who do don’t report self-employment taxes.

When third-party contractors do receive a 1099-K, they report 24 percent more income, according to the 2017 Journal of Public Economics.

By some estimates, between a quarter and a third of all U.S. workers collect some income from independent contracting, according to the Gig Economy Data Hub, which is curated by the Aspen Institute. About one in 10 workers count on independent contracting as their main source of income, while only 1 percent rely on app-based platforms like Uber or Airbnb, according to the data site.

But there is widespread agreement among government officials, tax policy experts and gig economy researchers that the role of independent work is growing as the pandemic drives Americans to rethink the nature of work.

“It’s a way to raise tax income without raising tax rates, which is something representatives generally like,” Steward said, adding that lawmakers of both parties supported the idea in conversations with her.

Watson describes the change as a clean-up measure to simplify taxes, but he sees the consequences of changing the rules for third-party app earners and the companies that contract them. Those firms will need to spend more money to comply, but the extent to which they pass on the costs to workers or customers is unclear.

“The $8 billion seems like a somewhat small number,” Steward said. “It’s an increase on a relatively low-wage and relatively small population.”

The tax reporting debate is framed by a deeper controversy over how all gig workers are classified and if labor laws need to change to reflect the modern workforce.

Such rules surfaced with the advent of eBay, as lawmakers wanted to capture legitimate taxes on income without discouraging economic activity. The introduction of smartphones revolutionized that economy. Mobile apps enabled companies to connect service workers with clients in significant numbers. Companies set the terms of employment and pay.

Some Democrats want to reclassify these workers as employees, granting them access to benefits such as healthcare and collective bargaining rights. Republicans generally oppose such moves, claiming they choke business independence and economic growth. They argue the labor designation reflects the voluntary, part-time and informal nature of the work.

Tech firms say these employment arrangements suit their workers and complained that the new rules would force workers to supply their Social Security numbers, creating a potential a barrier to attracting them.

The Senate passed the American Rescue Act over the weekend, and the House followed on Wednesday. It will head to President Joseph R. Biden Jr. for his signature.

Biden must sign the bill by Sunday, when federal unemployment aid runs out for 10.6 million Americans, along with other pandemic relief measures, many of which were enacted to support gig workers.

This story was updated to reflect the passage of HR 1 in the House of Representatives.
«Previous Post
Jury Selection Continues In Derek Chauvin Trial As Third-Degree Murder Charge Reinstated»Next Post
Chicago Hospital’s New Name Reflects Commitment To Its Community