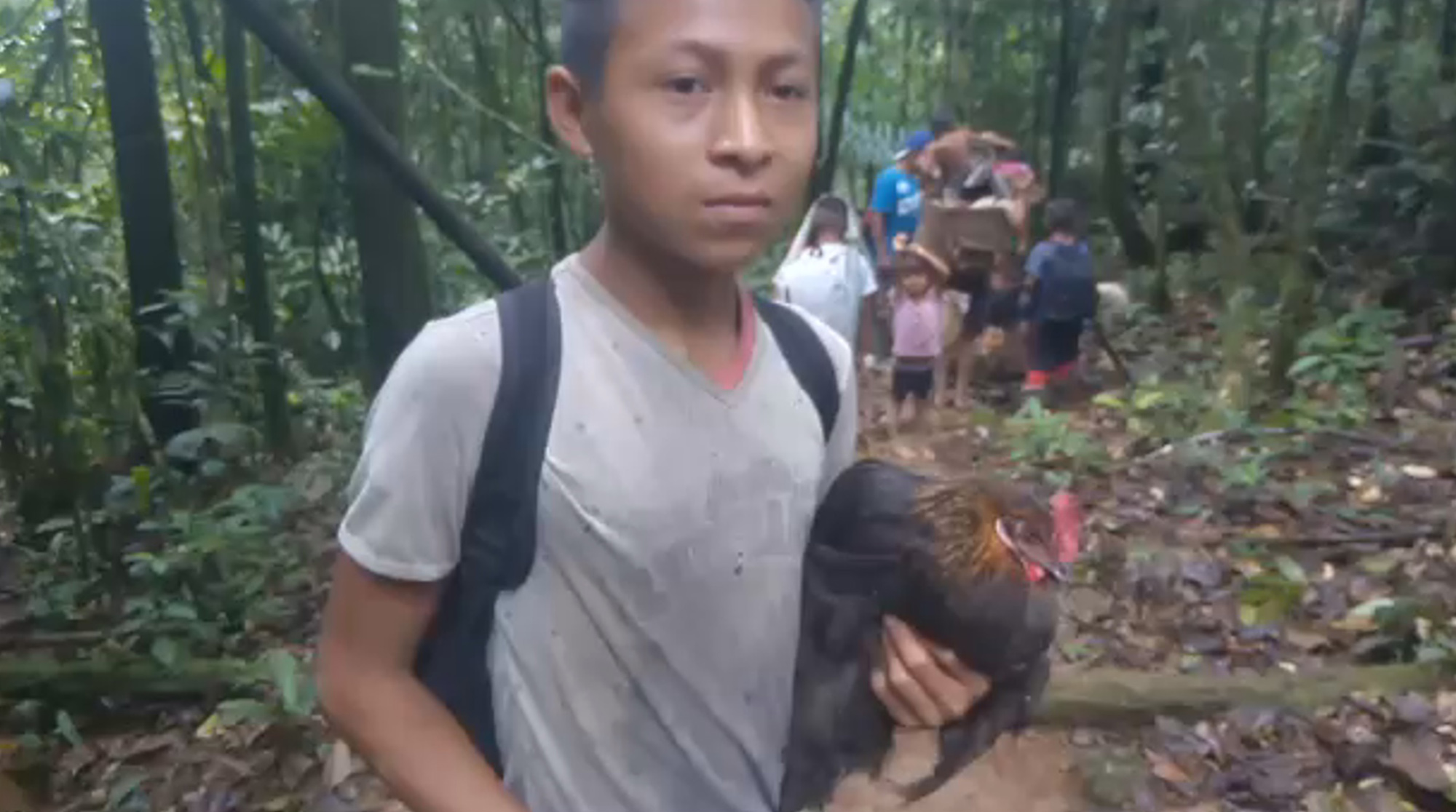 A community of 48 families, around 300 people, walk through the jungle after fleeing their land in the department of Antioquia in northwestern Colombia to escape the threats and dangers posed by rival cartels. (Indepaz/Real Press/screenshot)

An entire indigenous community has fled on foot through the jungle to escape two rival criminal gangs who are at war for control of the area, which is a route for drug, gold and human trafficking.

The community of 48 families, or about 300 people, belongs to the Colombian indigenous group Turriquitado Alto, and they have fled their land between the Murindo and Chagerado rivers, in northwest Colombia, to escape the threats and dangers posed by the National Liberation Army (Ejercito de Liberacion Nacional – ELN), and the Golfo Clan.

The mass exodus began in February, when roughly 5,000 indigenous people became trapped in the department of Choco, near Antioquia, due to the confrontations between the two rival gangs.

Juana Cabezas, 23, a researcher at the Observatory for Conflict at the Institute for Development and Peace Studies (Instituto de Estudios para el desarrollo y la paz – INDEPAZ), said that the confrontation between the two rival gangs was triggered by their bid to control the territory, which is the main route for trafficking drugs and rare metals such as gold and silver from illegal mining, and for human trafficking. He said that many Venezuelans, especially women, are being taken to the coast to be sent to Europe and the United States to work as prostitutes.

These criminal organizations have been setting up anti-personnel mines to mark “their” territory and dissuade other groups, including the authorities, from venturing into it.

“Two weeks ago, a 13-year-old boy lost his leg after stumbling across a minefield,” Cabezas said.

Now the locals fear for their lives, and the entire community — whose economy is based on survival farming and hunting — has decided to leave their territory in search of someplace safer. They hope to one day be able to return to their homes.

Among the 300 people who have fled in this latest wave are children, pregnant women and elderly people, the latter of which considered the leaders of the community, according to Cabeza.

They are crossing the jungle on foot and face many dangers.  “They can step on mines, come across other, smaller criminal groups, and they also face other problems such as malnourishment because finding food is more difficult,” Cabezas said.

The Indigenous Organization of Antioquia said other communities are also in danger of being displaced, including the Garrojo community (105 people), the Bachidubi (193 people) and the Coredo community (172 people), as they also are surrounded by minefields set up by the ELN in January.

Cabezas said that the indigenous communities also face another problem: the murder of their leaders. According to figures released by INDEPAZ, 1,145 leaders have been killed since the beginning of the peace agreement in 2016 between the FARC (the Revolutionary Armed Forces of Colombia) and the government. Among them, 305 were indigenous, 79 were Afro-Colombian and 307 were farmers.

Last year, 310 social leaders and Human Rights activists were killed in Colombia, including social leader Luz Ayda Conchave Lana. She was killed Feb. 19, 2020, and her funeral was attended by dozens of people demanding peace and justice

Drug trafficking is also claiming the lives of locals. According to INDEPAZ, 91 massacres took place in 2020, killing 381. So far this year, 15 massacres have been reported, with 59 victims.

The government of Antioquia has said that the displacement of indigenous communities is on the rise, but so far it is unclear how many people are affected. Government officials also said that they have deployed humanitarian aid to these communities.

Cabezas said that these communities need more help than just humanitarian aid, including investing in roads and providing economic assistance to encourage people to stop growing coca plants, which can be turned into cocaine, and instead to grow other crops, for food, for example.

The indigenous communities are also asking the government to provide a better educational system that respects and incorporates their traditions; to impede the criminal gangs’ efforts to recruit their children and teenagers; and to end violence and sexual violence against women.