VIDEO: Coming Out Of Their Shells: Extinct Wild Giant Tortoises Return To The Galapagos Islands

Huge reptiles wiped out by hunters come back thanks to a breeding program of close relatives.
By Ana Lacasa March 9, 2021
Facebook
Twitter
Linkedin
Email 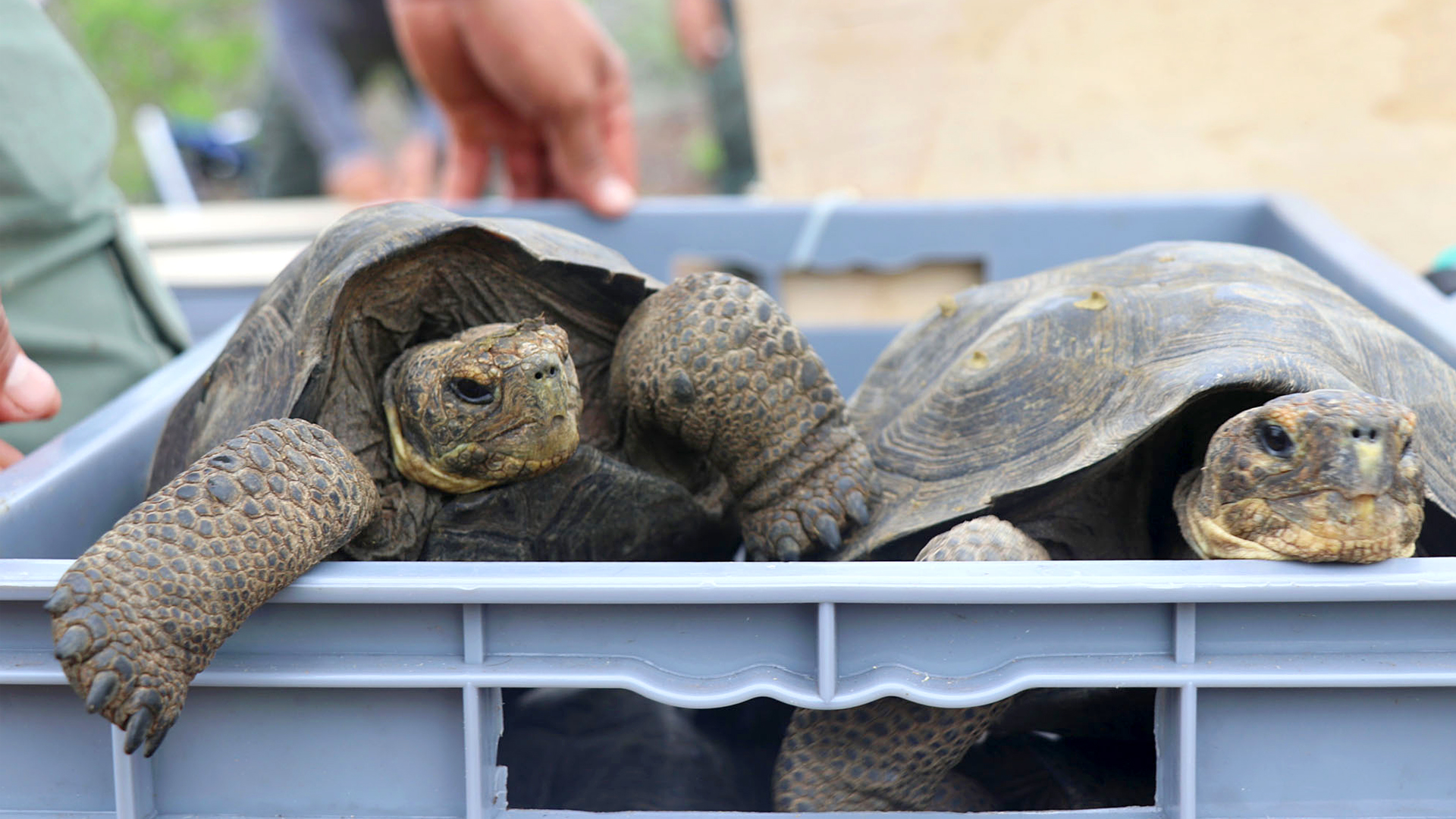 The tortoises that were released will replace another species that went extinct 150 years ago. (Parque Nacional Galapagos/Real Press)

SANTA FE, Ecuador – A group of 191 critically endangered Hood Island giant tortoises was released in the Galapagos Islands to replace the species that went extinct 150 years ago because of whale hunters and pirates.

The tortoises belong to the Chelonoidis hoodensis species, which are critically endangered according to the International Union for Conservation of Nature’s Red List. They were released on the 25-square-kilometer (9.6-square-mile) island at Santa Fe in Ecuador.

They were bred in captivity at the Fausto Llerena center on the nearby island of Santa Cruz, as part of a program to restore the ecological balance of the Santa Fe island. There used to be tortoises from a similar species on Santa Fe, too, but the endemic population went extinct 150 years ago.

“Most of the animals released in this final phase of the program are young, and it is difficult to know how many are female or males, but they were incubated so that most of them would be females,” said Washington Tapia, director of the program for the Restoration of Giant Tortoises.

The new batch of tortoises belongs to the Chelonoidis hoodensis, which are endemic to Espanola island, and according to Christian Sevilla, a technician at the National Park, they are the most genetically similar to the ones that once lived on Santa Fe. 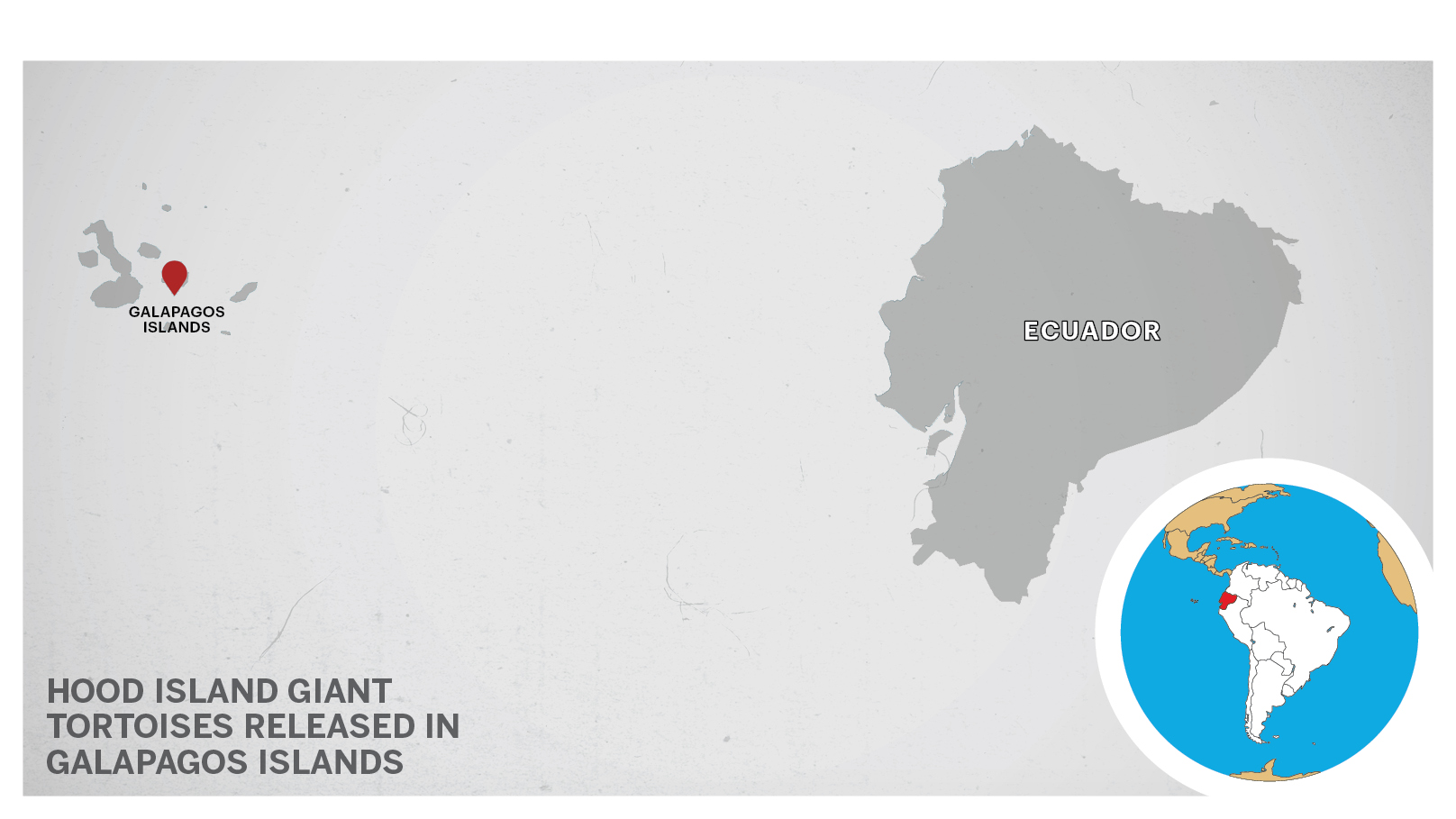 The group of tortoises is the final phase of a lengthy reintroduction process of giant tortoises to the island that started in 2015 and is geared towards repopulating it with this species.

Tapia explained that as it was impossible to find the endemic tortoise of the Santa Fe island. So, it was decided to use the ones living on Espanola island because they were “analogous to the species that once lived there”.

In this group, there are also 31 tortoises that are nearly adults, of which 14 are male and the rest are female, and they will reach sexual maturity soon.

These new tortoises had to undergo a quarantine process of 10 weeks in order to eliminate any seeds in their digestive system. The animals also had parasites removed.

Tapia also said that it was important to have a “breeding population on the island” as this “contributed to the restoration of the ecological integrity and biodiversity on Santa Fe”.

“The ecological process began in the 1970s when the goats that had been introduced on the island were eradicated, as they were a real problem for the survival of the tortoises as they ate the vegetation the tortoises depended on,” said Danny Rueda, director of the National Park.

The tortoises will live with other animals on the island such as iguanas and 18 bird species and will play an important role in the ecosystem.

“They play the same role as a large mammal, controlling vegetation and spreading seeds, which helps to preserve the correct balance in the ecosystem,” said Tapia.

One of the most famous Hood island giant tortoises in the Galapagos is Diego, a 100-year-old tortoise who helped to keep the species alive by single-handedly fathering about 40 percent of the 2,000 tortoises present on the islands since the beginning of the breeding program in the 1960s.

It is unclear which of the latest tortoises to be introduced to the island are his descendants.

«Previous Post
Cheetahs May Return To India After Over 70 Years»Next Post
A Hollywood Story: Joel Gonzales’ Cinematic Rise From South Central LA To The Executive Suite