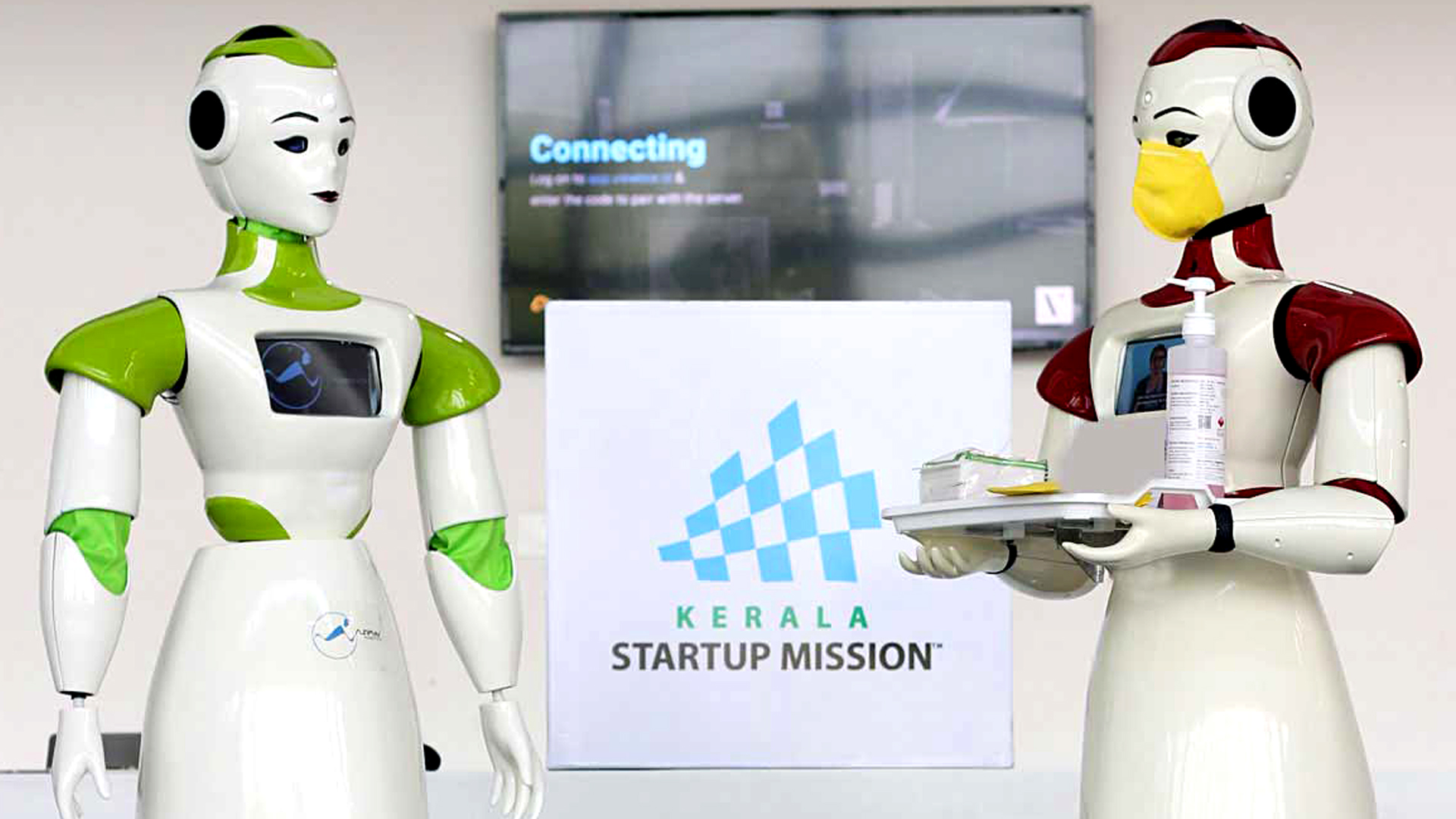 GUWAHATI, India — In India’s northeastern state of Tripura, where sometimes finding a right adapter means scoping out a dozen shops, Harjeet Nath was determined to build a robot against all odds when Covid-19 struck.

Last year, Tripura was declared ‘coronavirus free’ with only three confirmed cases having fully recovered by April. Only to have a pandemic emergency a month later, first with the outbreak of over 100 cases in the Border Security Force battalion in the Dhalai district followed by an influx of stranded residents from different parts of India. 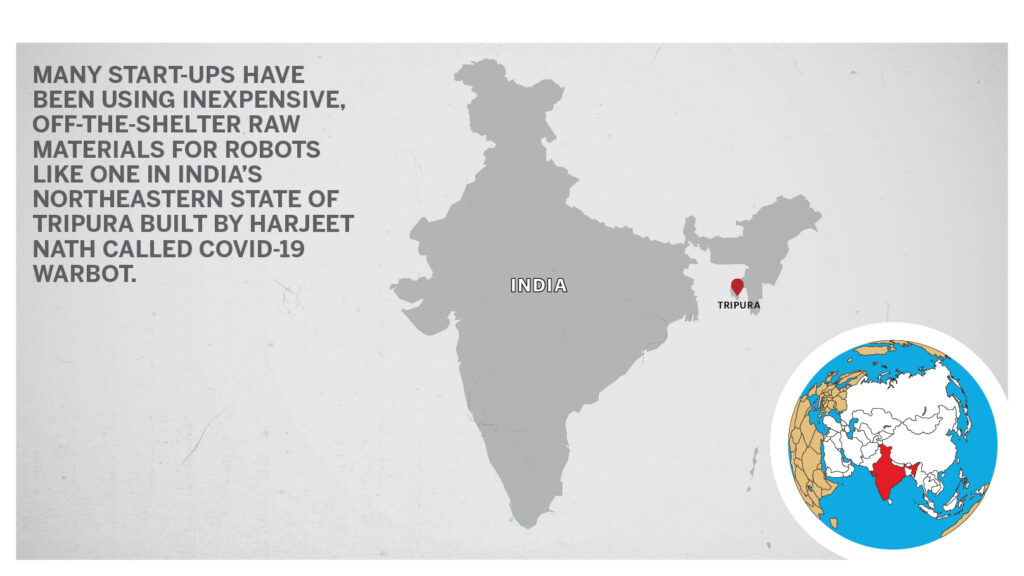 Closer to mid-May, Harjeet had already watched videos on the utilization of robots in other countries and made a makeshift robot using scrap from his lab: three rotors, two lead-acid batteries, a transmitter, a receiver, and a USB output.

“I even exposed myself to coronavirus while I waited on a few helpers to apply the finishing touches,” Harjeet, an assistant professor at the Department of Chemical and Polymer Engineering at the Tripura University, told Zenger News.

In the end, it was all worth it. “No healthcare worker was infected after my robot was installed in the Covid-care ward,” he said. Harjeet’s ‘Covid-19 WARBOT’ was deployed in a 250-bed Covid-care center — now closed shut with the situation under control — in Hapania, on the outskirts of the state capital Agartala.

With a 15-20 kilogram (33-44 pounds) payload, the device could deliver medicines and food to patients without human intervention. It could work for nearly three hours on a battery that took as long as eight hours to recharge. Harjeet had embedded a wi-fi-controlled camera with an inbuilt microphone and speaker to set up a “WhatsApp-like call” between healthcare providers and patients. The only constraint was the distance of 20 meters within which the robot could operate.

Robots have been taking on hazardous jobs across the world. In India, too, start-ups dealing in robots have risen to the occasion. India features among the top 10 countries in the world with the highest annual installation of industrial robots: a record 26,300 units, according to a 2020 report by the International Robotic Federation. The report states that India doubled the number of robots working in factories within five years.

The company made waves on social media with its two Sayabot androids creating coronavirus awareness and distributing masks at the Kinfra Hi-Tech Park in Kalamassery, an industrial region in the southern state of Kerala.

Their ‘KARMI-Bot’ found its way to a Covid isolation ward at the Government Medical College Hospital, Ernakulam, to assist healthcare workers with spraying ultraviolet-based disinfection liquid and dispensing food or sterile containers onto trays.

Like Asimov, most of the robotic start-ups have been using inexpensive, off-the-shelf raw materials for robots.

Rajasthan-based Club First dabbled in a novel technology that helps robots balance almost anything they handle, say hefty payloads or even liquid. “The robots are based on a technology that helps them bend with ease, like a spinal cord. For navigation, they don’t follow lines or magnetic paths, they use artificial intelligence,” Bhuvanesh Mishra, managing director of Club First, told Zenger News. Its service robots, particularly Sona 2.5, have been pressed into service at Jaipur’s Sawai Man Singh Hospital for conducting thermal screening and delivering essentials to patients.

While Club First’s service robots can operate within 232 square meters, Guwahati-based Yantrabot Technologies Pvt Limited’s robots cover a wider range. “Much like cellular networks, a tower is placed between the robot and the person using the mobile app. If the distance exceeds 10,000 square meters, another tower will be installed. A tower just costs INR 4,500 ($61.5),” said Arunjyoti Borgohain, co-founder of Yantrabot Technologies. As of now, the company’s real-time robots are in use at a quarantine facility at the Assam Medical College and Hospital, Dibrugarh. They use a wireless navigation system for mobility.

During the pandemic, hospitals relying on robot-assisted surgeries carried on with elective surgeries. Elective surgeries comprise a major source of income for hospitals, and delaying them affects patients psychologically, as per an article in the journal Nature Machine Intelligence.

Srivatsan Gurumurthy, a surgical gastroenterologist at Chennai’s GEM Hospital, performs minimally invasive surgeries using US-based Intuitive Surgical’s Da Vinci XI robot. He didn’t put his routine laparoscopies and robotic surgeries on hold as many others did during the pandemic.

“The in-built technology lights up lymph nodes that harbor cancer cells apart from the primary tumor, enabling enhanced removal of cancer during surgeries,” Gurumurthy said. The robot enables him to see 20 times better while performing surgeries.

Intuitive Surgical’s long-held monopoly over surgical robots might end in India. A new entrant to the surgical robots market is Asimov Robotics. The company is planning to expand its purview of service robots into surgery.

In 2018, it received INR 48 lakh ($65,593) from the government for research on a minimally invasive cutting technology to correct craniosynostosis, a birth defect.

Sensing the increased demand for cleaning products in the wake of Covid-19, leading market vendors invested heavily in the space. The growth of India’s cleaning robots market is slated to be more than 17 percent over the five-year-period between 2021 and 2025, as reported by TechSci Research, a global market research and consulting company.

Rajeev Karwal, who founded Milagrow HumanTech in 2007, has reaped the fruits of centering his products on housekeeping services since 2011. In the pandemic, the firm’s sales saw a 15-fold growth. “We made the right swerve towards the hospitality industry and facility management sector at the beginning of the company’s development,” said Karwal, also the chief executive of Milagrow HumanTech.

Talk about sales, Club First and Asimov posted an unprecedented surge — 60 percent and 200 percent, respectively, as claimed by their founders. “We hit the sales we had expected to clock two years from now,” said Bhuvanesh Mishra, one of the founders of Club First.

The price of Milagrow’s robots, some as high as INR 90,000 ($12,230) went down as low as INR 50,000 ($683). The company, which imports over two-thirds of its components from China, is still sorting out supply chain issues. “Freight costs are five times higher since February,” said Karwal.

The next challenge for the Indian robotics market is scaling up production, which will bring down the average selling price of robots. “The four cleaning robots launched during the pandemic cost between INR 8,000 ($109) and INR 500,000 ($6,833), which will be cheaper on mass production. Despite costing lower than the European or Chinese versions, only a select few can afford them,” said Arnab Barman, founder of the Defense and Space Robotics Laboratory. The start-up, initially vested in building robots for defense purposes, recently expanded its innovation towards surface-cleaning robots.

Widespread concerns of robots, be they ethical or future replacement of jobs, still run rife in a country where unemployment persists. “But at least you know that if there is a second wave of Covid-19, the robots will fight back,” said Barman.