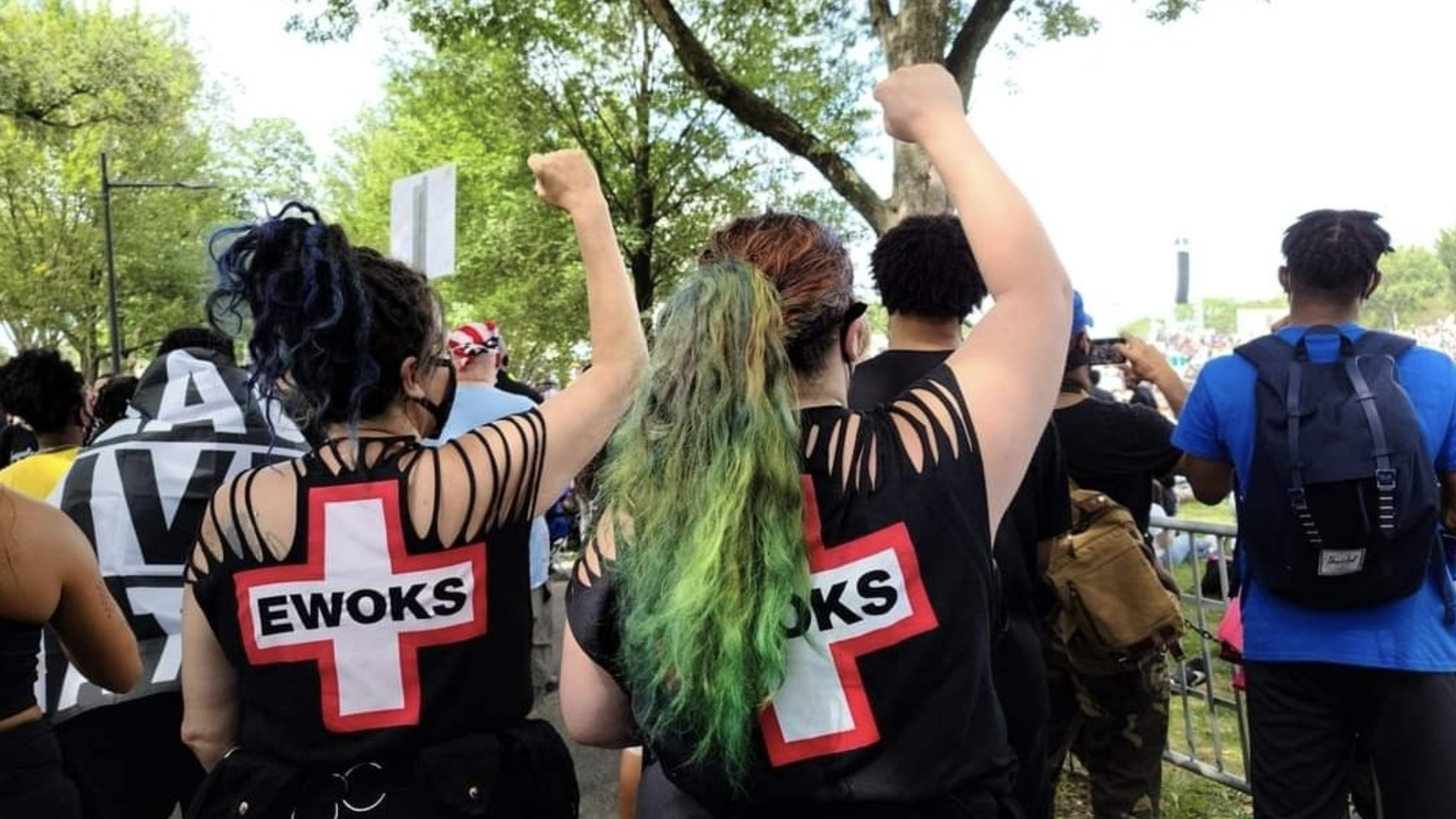 PORTLAND, Oregon — This Pacific Northwest city experienced 100 days of nightly protests in 2020, initially kicked off by the death of George Floyd late last May. But the city’s activist community goes beyond rallying in the streets.

Many Portland residents serve each other in an underground market that provides essential services, such as first aid, mental healthcare and vehicle repair. All are free of charge.

“We’re trying to float all the boats up from the bottom of the silo,” said Ree Campbell, a member of the Equitable Workers Offering Kommunity Support (EWOKS). (Others are reluctant to be named, fearing reprisals.)

The EWOKS are a volunteer group of trained first responders who use social media to locate and/or assist in crisis situations. Portlanders can use the group’s Facebook, Twitter or Instagram to alert them of emergencies and ask for assistance, said Campbell.

Community-led programs, like the EWOKS, use social media to care for citizens independent of the city’s service infrastructure. Emphasizing social justice, many cite their goals as supporting unhoused and BIPOC (Black, indigenous and people of color) communities, without the need for city officials.

Even without funding and emergency hotlines such as 911, the EWOKS say they do a better job assisting in crisis situations than city-led first responders.

Last summer, the EWOKS, among other mutual aid groups, responded to people involved in protests, often treating rubber bullet wounds and tear gas-related injuries. During a time when some citizens felt the city had turned on them, the EWOKS say they stepped in to fill the gaps.

Campbell and Krieger say their movement is only possible due to support from dozens of similar groups that claim a similar mission: providing services their cities can’t.

“It is a very Portland way to address a surge in need on a variety of crises. Our office and our bureaus do want to do their jobs in a way that is actually effective. We are spending a lot of time working with the Bureau of Emergency Communications (911) on how they prioritize and triage emergency calls,” Mapps told Zenger News.

This year, Portland introduced a street-response team as an alternative to police. Similar to Eugene, Oregon’s CAHOOTS (Crisis Assistance Helping Out On The Streets), these first responders assist in mental-health crises and other scenarios where armed law enforcement may not be necessary. But some citizens still opt for independent services, like EWOKS.

The Portland Street Mechanics is another collective offering donation-based support to their peers. When the EWOKS treated wounded protestors and unhoused community members last summer, the Street Mechanics fixed their cars and bicycles.

A self-declared “rogue group with amateur mechanic skills,” it uses Twitter to coordinate fixes and offer clinics for people to bring damaged vehicles for repair. During the winter months, it offered car clinics, and used social media to inform their followers of unsafe road conditions and winter weather, a service generally provided by local news or TripCheck.

But Portland’s mutual aid doesn’t stop with first responders or car clinics. There is an abundance of organizations in the metro area using social media to offer everything from counseling to dog food to potatoes, free of charge.

At the beginning of 2021, Portland’s city council discussed their priorities for the year, and homelessness was the top issue. According to Multnomah County’s 2015 Point-in-Time report, more than 3,000 people were experiencing homelessness in the Portland metro area. While city officials agree there is a lack of data surrounding this population, homelessness remains highly visible. Portland’s struggle with housing makes it a hotspot for mutual-aid projects.

We are out on the ground coordinating mutual aid support for wildfire disaster relief! We’ve got food, water and other drinks, household supplies, lots of donated clothes, some pet food. Please send anyone who is needing assistance to the parking lot just east of Holladay Park! pic.twitter.com/f169nMHA0g

Campbell said people associated with the Portland activist scene worry about police tracking them via social media, citing the case of Gabriel Agard-Berryhill, a teenager who police arrested after matching tactical gear he wore to protests with his online purchase history.

The activist community has also dealt with harassment from people impersonating journalists, according to Portland journalist Suzette Smith.

But Campbell and Krieger explain that because they have been in the scene longer than many co-workers, they are proud to speak for their community.

Recent snowstorms in Portland halted a car clinic the Street Mechanics were planning, but other mutual aid groups, like the Portland Action Medics, took to social media to raise money for unhoused people in need of gear and share emergency shelter openings.

The EWOKS are also planning a series of online mental health workshops in the coming weeks.

Most mutual-aid groups maintain direct lines of communication with the communities they serve via social media, and frequently organize events where people can donate or collect food and supplies.