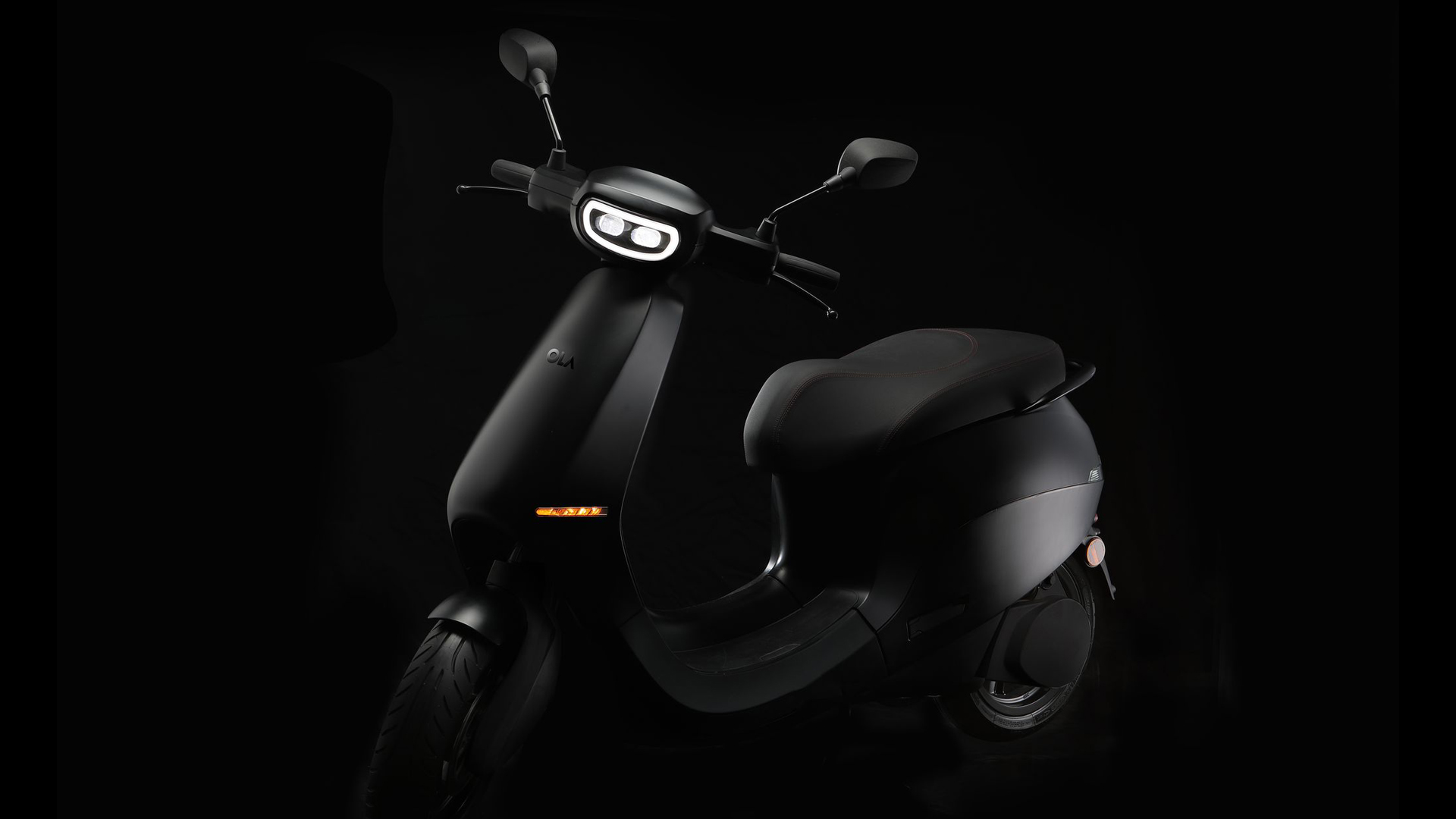 The first look of the Ola electric scooter. (Ola)

PUNE, India — Tesla is coming to India but no one knows yet if Elon Musk will open a Gigafactory — in which the firm not only makes its cars but the batteries that go into them — in the country.

Bhavish Aggarwal, though, plans to open a similar ‘Gigafactory’ for his own firm Ola — only it would be the biggest in the world and would be only for electric two-wheelers.

The work on this 500-acre factory — approximately 140 kilometers (87 miles) from the southern Indian city of Bengaluru — in the Krishnagiri district of Tamil Nadu will start soon, and Aggarwal has been visiting the site very often.

When completed, the Ola ‘Future Factory’ will be able to produce 10 million electric scooters per year, or one such scooter every two seconds. 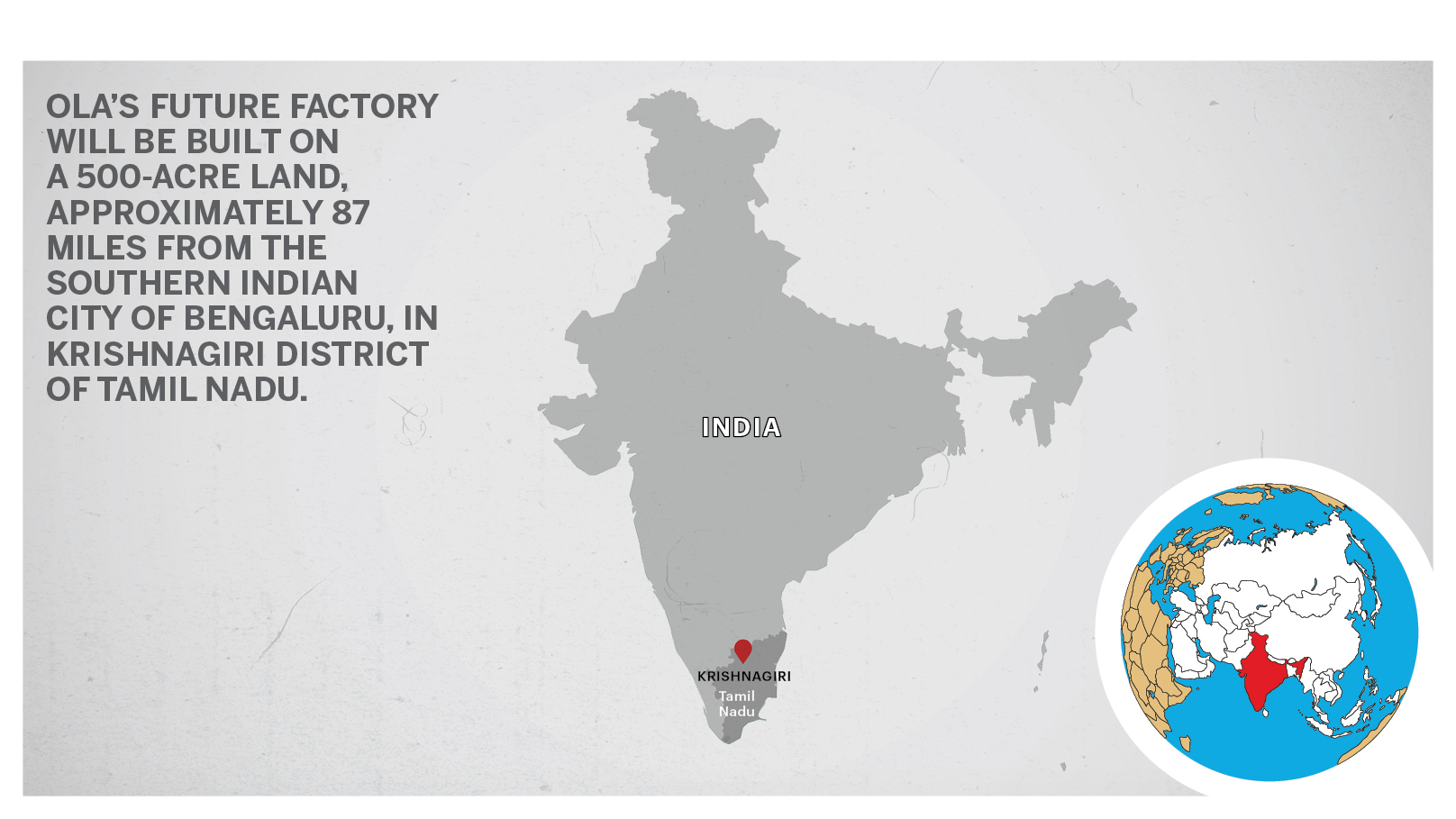 “With 10 million units a year, it’ll be the largest two-wheeler factory in the world, 15 percent of the world’s capacity,” tweeted Bhavish Aggarwal, co-founder and chief executive of Ola Cabs. “With 3,000+ robots, it’ll be the most advanced and with 100 acres of forest, carbon-negative operations, it’ll be most sustainable.”

“The company announced an INR 2,400 crore [$274 million] Memorandum of Understanding with the Tamil Nadu government in December 2020 and rapidly completed the land acquisition in January this year,” Ola said.

“The company is racing ahead to operationalize its factory in the next few months. An estimated more than 10 million man-hours have been planned to bring the factory up in record time, with the first phase becoming operational in the coming months,” the company said.

“When the news of the new plant came up, it was surfaced that what Tesla is to the U.S., Ola plant is for India,” Puneet Gupta, director of automotive forecasting, IHS Markit, told Zenger News.

“Rest of the players in the two-wheelers scenario are not that aggressive. Hence, Ola will be one of the biggest players if this succeeds,” Gupta said. “However, when there is a price gap, a consumer will prefer gasoline engine over an electric vehicle, except the urban market because the consumer can be attached to a social factor like the environment.”

“Ola, being a small start-up, preparing for the scale they are talking about is something unimaginable,” Gupta said. SoftBank- backed Ola Electric, set up in 2017, is the electric vehicle arm of transportation platform Ola (ANI Technologies Pvt. Ltd). It became a unicorn within a year of its inception. Unicorns are firms with a valuation of $1 billion or more.

Ola’s project comes at a time when Tesla is set to make its India entry and the government is trying to boost the manufacturing of electric vehicles, their batteries, and other components.

The integrated manufacturing plant will have 10 assembly lines, 3,000 robots, and around 10,000 workers. Each e-scooter will have two removable batteries and the company is building a charging network.

The Bengaluru-based firm is aiming to put the electric scooters on the global map and start production as early as June. While it will manufacture e-scooters at the facility, separate factories for four-wheelers, and motorcycles will also be established.

The scooter uses swappable high-energy-density batteries to deliver a range of up to 240 kilometers (149 miles). As claimed by the company, the electronic scooter can do a 0-45 kilometer (0-28 miles) per hour sprint in 45 seconds and comes with a digital instrument console and an under-seat storage capacity of 50 liters.

Ola is yet to announce the price of the electric scooter.

In December 2020, Ola said it would use ABB’s automation solutions in its factory’s key manufacturing process lines, including its painting and welding lines, while the ABB robots will be deployed extensively for the battery and motor assembly lines.

Ola was launched in 2010 aiming to bridge the gap between cabs and commuters. It is India’s homegrown ride-hailing app which has users across 100 cities of India and employs 1.5 million driver-partners.

India’s two-wheeler market exhibited healthy growth during FY2013-2017, with the sales reaching $15 billion in FY2017, according to this report. Growing demand for two-wheelers in the country is attributed to increasing per capita income levels, high fuel efficiency of two-wheelers, and easy financing options.