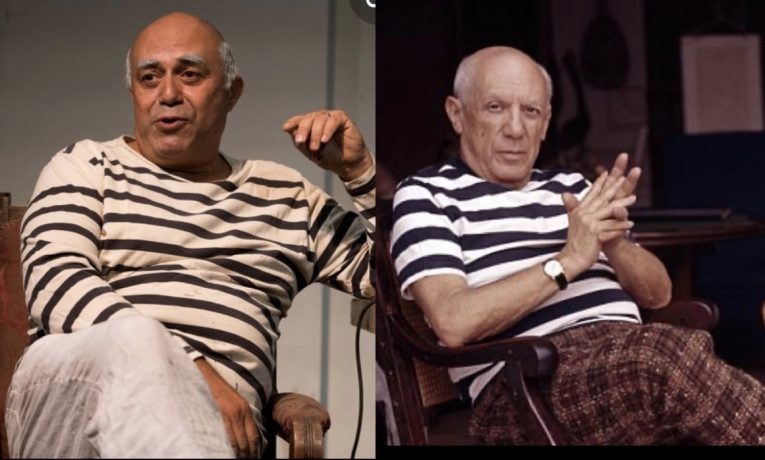 The prolific Herbert Sigüenza has written scores of plays that he has performed thousands of times during his 37 years as a founding member of the renowned Chicanx comedy troupe, Culture Clash. And for the last decade, the playwright/performer/graphic artist has brilliantly brought to life the iconic Spanish painter via his solo piece, “A Weekend with Pablo Picasso,” which he has played to sold-out houses nationwide.

Running between now and April 4, an on-demand film adaptation of this spellbinding bio-play can be viewed by audiences. The Los Angeles Times christened it “a stellar success!”

CRIS FRANCO: Herbie, I meant to ask you this question at the end of our interview, but I’ll ask you this first: How is San Diego Repertory faring amidst this pandemic that has shut-down live theater?

HERBERT SIGÜENZA: We’re hanging in there. We have enough donors to keep us alive, keep the doors open. Of course, there are less expenses because we’re not spending money on productions. But it means that we’re now focusing on creating virtual content.

CF: Which brings us to the film adaptation of your play, “A Weekend with Pablo Picasso.” Your captivating portrayal of Picasso is insightful and deeply inspiring. It’s a terrific movie.

HS: Wow. Thanks, I’m very proud of it. We shot it in six days on San Diego Repertory’s stage with some exteriors at a guy’s patio in Escondido. I think it transitioned well from stage to film.

CF: It’s very Picasso. Inventive, surprising and passionate. It poses so many riveting questions about why humanity creates — questions Picasso is not about to answer.

HS: No. He’s too busy working.

CF: I most loved when you as Picasso say, “The world doesn’t make sense. Why should my paintings?”

HS: That’s Picasso all the way.

CF: How would you synopsize your play?

HS: Like the title, it’s about a weekend with Pablo Picasso. I want viewers to experience three days with the man in his villa outside of Cannes (France) named La Californie. There’s really only a slight storyline of him having to complete a demanding commission of six paintings and three vases over one weekend. That’s the driver of the story.

CF: How much of what you present is adapted from true events?

HS: I’d say 80 percent. I did come up with the action of him only having three days to fulfill the commissions to give the piece a ticking clock, urgency. But the text is derived directly from his quotes and what people said about him. I did a lot of research for the play.

CF: It’s evident. You even transformed yourself to look like him. With you as a sort of a Picasso expert, how would you describe him?

HS: A restless soul who often said that he worked ceaselessly because he was running from death. Believing that if he kept creating, he could keep death at bay. And I can totally relate to that. I think that’s why I write, perform and continue with my graphic art. Subconsciously, I’m thinking, “Well, as long as I make art, I’m not going to die. I’m having too much fun. I’m doing something.”

CF: I’ve heard it said that Picasso evolved art by de-evolving it. Do you agree?

HS: Absolutely. He changed the way we see and create art. The figure and perspective had been approached the same way for centuries. He totally destroyed that. He and Braque invented Cubism which, in a bizarre way, decomposes an image, then puts it back together. You get different perspectives, different lines — a very weird geometric way of looking at the world — truly revolutionary.

CF: “Revolutionary” is often used to describe him. Against what was Picasso revolting?

HS: Formalism. The factories of the newly started Industrial Revolution were turning humans into slave-like worker/robots on an assembly line. It was dehumanizing and Picasso revolted by creating pieces that drove us back to our humanity &mldr; .

CF: So, what inspired your delving into this revolutionary?

HS: At age seven, while in my dentist’s waiting room, I picked up a copy of a photo essay titled “The Private Life of Picasso” by Douglas Duncan. He photographed Picasso for six months — taking baths, painting, playing with his children, eating. I loved what I saw and I thought, “Wow, this viejito is great!” I told my mom, “When I grow up, I wanna be this viejito.” She replied, “No, this loco is Picasso.” And I thought, “No, he’s not a loco, I think he’s onto something.”

For decades I researched Picasso, sensing that one day I would play him. When I turned 50, I presented the book to San Diego Rep, saying that I wanted to base a play on it. And to my surprise, they said, “OK, write it!” [chuckle] I read everything on Picasso, but my first draft was more like a lecture without a story. Then I thought of including the audience as art students to whom Picasso is giving a master class. It worked because it allowed me to speak directly to the audience.

CF: And by having your character of Picasso actually paint and sculpt during the piece beautifully conveys the fact that he was consumed by his creativity.

HS: Oh, yes, his art was his number one priority. Anything personal, like a love life, came second. Even when American museums were having retrospectives honoring him, he’d turn down attending saying that a trip to New York City would interrupt his work.

CF: How do you capture someone who is so free and elusive?

HS: Well, I kind of understand the guy. I’m basically playing my dad and I also have some of those elusive qualities.

CF: I’ve admired your many skills for so long and have seen how dedicated you are to your craft.  How have the life-long sacrifices of being a writer, performer and graphic artist impacted your life?

HS: I don’t know how to do anything else, and I won’t do anything else. That’s why my favorite quote of the play is where Picasso says, “The second job is death.” The minute you start doing other things besides your art, you cease to be an artist. I’ve taken that to heart by doing something creative every day. If you were to stick me in a cubicle to sell insurance — in three days, I’d be dead.

CF: What do you want an audience to take away from your play?

HS: That everyone has a creative spirit. And that, although creating is a selfish act, you have to keep reminding yourself, “This is my life, my vision.”

CF: Having worked in entertainment for nearly four decades now, do you think Latinos have advanced in that time?

HS: No. It’s a definite no. And to prove my point, all you have to do is turn on the TV right now.

CF: Statistics vary, but we’re always listed as having at most 5 percent of the speaking roles in TV and film.

HS: And probably a smaller percent behind the camera. People say that it’s gotten better. No, it hasn’t. We’re invisible. East Asian actors are much more prevalent than we are.

CF: I think it’s because Hollywood might find them non-threatening. Perhaps because they have very proper British accents and are smaller in numbers than we are.

HS: Yet in so many workplace comedies, there’s that funny East Indian co-worker in the breakroom — which is great for those actors.

CF: Yes, bravo for them. But it’s a form of discrimination (against Latinos) by exclusion. We’re 18 percent of the U.S. population but, once again, represent at most 5 percent of the speaking roles. Any way you look at it, we’re grossly underrepresented.

HS: That’s why I don’t even think of Hollywood anymore. In the ’90s, after our Fox TV sketch comedy series aired, Culture Clash was all over the place pursuing that carrot.

HS: Yes. It got to a point where I realized, “You know what, I’m wasting time here.” Again, back to Picasso. Am I being an artist? No, it seems like I’m being a hustler, a beggar of sorts. Liberation only came when I said, “You know what, I’m not gonna even think of Hollywood — ever. I’m just going to create my theater and be happy.” And I’ve been happy for decades now.

To see Sigüenza’s dazzling portrayal of el maestro Pablo Picasso, watch CalTechLive! presents “A Weekend with Pablo Picasso.” Directed by Tim Powell and Todd Salovey, produced by San Diego REP, it’s on-demand from now through April 4, with live talk-backs with Sigüenza on selected dates. Tickets and all info at www.events.caltech.edu/picasso.