Healthy And Plentiful: The Power Of Mexican Nopal

This nutritious plant is grown throughout the country and provides nutrients and disease control.
By Christian Valera Rebolledo March 9, 2021
Facebook
Twitter
Linkedin
Email 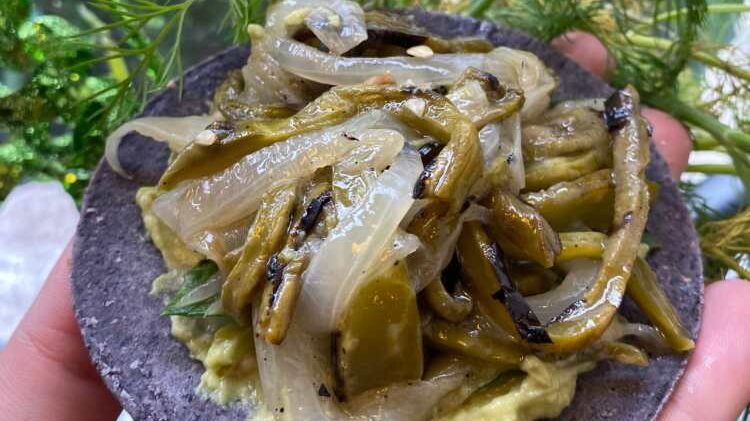 Nopales can be prepared with onion and avocado and are consumed in tacos, juices, or a side dish for meat. (Christian Valera Rebolledo / Café Words)

Alongside tortillas, the nopal is the quintessential Mexican food item that stands out both in the nation’s cuisine and its history. Every year it nourishes millions of Mexicans, as it is nutritional and healthy. Furthermore, it contains several medicinal properties.

Since the 1950s, the demand for this delicious vegetable has skyrocketed as people seek thorn-free nopales to prepare them in different dishes. There are several plantations of nopales throughout the nation to keep up with the people’s massive demand.

The importance of the nopal in Mexico is showcased in the Mexican flag, which includes an eagle devouring a snake while perched in a nopal cactus.

The main advantage of nopal plantations is that the plant can survive even through drought seasons, thanks to its adaptability to the environment. Because the cacti can survive in arid zones, they are the preferred vegetable to grow when the harvest of other crops is impossible. Fortunately for the nopal farmers, much of Mexico has these climatic characteristics.

Nopales have a high nutritional value and are a good source of calcium. Moreover, they help people with weight issues, protect against cancer and diabetes, and can lower blood glucose levels.

The plant grows a prickly pear fruit, also called “tuna.” Depending on how ripe the nopal is, it may be bitter or sweet and have a variable amount of minerals and vitamins. Moreover, there are more than 300 different nopal species.

“I was not particularly fond of nopal, despite being Mexican,” said Concepción Álvarez, a 70-year-old pensioner. “Everything changed when I discovered I was diabetic.”

“The doctor told me that adding nopal to my diet would help me lower my glucose levels,” said Álvarez. “Moreover, eating them also leads to feeling satiated and avoiding eating things that are not allowed in my diet.”

Nopal has reached the market in different presentations, such as tortillas, flour, juices, oils and many more, easily purchased in supermarkets, pharmacies or healthy food stores.

“It is one of the best ingredients that Mexicans can use in their cuisine. Some even make nopal tortillas so that they are healthier,” said Christina Rebolledo, a pensioner from Veracruz, Mexico. “I especially like them roasted with olive oil or in a good salad, minced with some tomato, onion, chili, olive oil, lemon, and salt. This salad can accompany any main dish.”

People like to consume nopales in various presentations, not just because they provide calcium, proteins, iron, ascorbic acid and carbohydrates, but also because they improve the body’s overall health. It is considered “the plant of life,” as it could be said that it never dies. If it dries up, it serves as a fertilizer and seed for its own species’ new plant.

Mexico produces 40 percent of all edible cacti of the world. The most important producers of nopal are those in Tláhuac and Milpa Alta, both in Mexico City.