‘Coming 2 America’ Review: The Sequel Nobody Wanted, With Good Reason

The movie begs the question: “How does it feel to have lived long enough to see your favorite franchise go down in flames?” 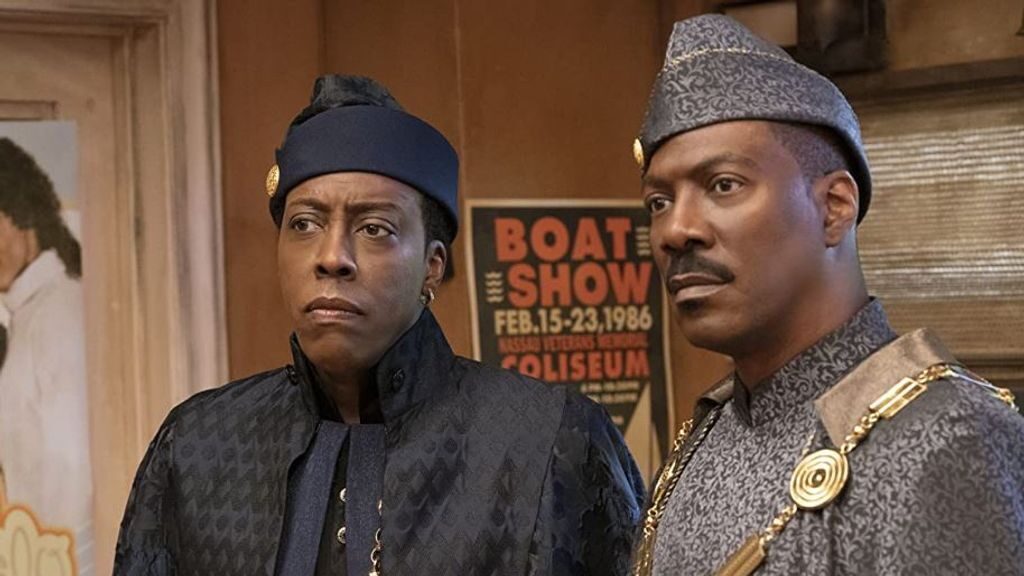 “Coming 2 America” proves the only thing worse than a sequel to a classic 1980s film is a sequel that tries to bring the franchise up to contemporary standards.

Like a Tesla that punches you in the face as a replacement for functioning brakes, no one asked for this.

The original 1988 “Coming to America” was a cultural classic. It not only inspired black audiences but defined Eddie Murphy’s success in the era. The first film was an admirable story about love and traditions that ended with a satisfying conclusion. Given its status, Hollywood has longed to cash in on a sequel. After 30 years, Paramount Pictures finally greenlit one — only to have COVID undercut its plans.

With no theatrical release in play, “Coming 2 America” was sold to Amazon Prime Video and after its release, it is clear why nobody asked for a sequel.

The Rundown: “Coming 2 America” is set 30 years after the original film. Prince Akeem (Eddie Murphy) of Zamunda is summoned before his dying father, King Jaffe Joffer (James Earl Jones). Akeem has three daughters, but conflict builds as Zamundian tradition demands that only a male successor can inherit the throne.

Akeem is later shocked to learn he has an illegitimate son from his initial visit to New York City over 30 years ago. Akeem and his royal aide Semmi (Arsenio Hall) travel again to Queens to meet the prince’s son, Lavelle Junson (Jermaine Fowler), and bring him to Zamunda to claim his throne.

Lavelle’s homecoming doesn’t go well. He struggles with a sister who doesn’t want him around, a woman he loves but can’t marry, and expectations an American man isn’t ready to meet.

Bright Spots: The film’s strength is its first act. The establishing shots of Zamunda and its inhabitants are based on the costume designs of fictional nations like Wakanda, where the style is bright and inspiring. Eddie Murphy and Arsenio Hall aren’t much different from the previous film, but their playful banter is certain to bring out chuckles and even a laugh-out-loud moment.

Wesley Snipes plays the leader of a nation called Nextdoria, and his performance is so over the top, he is the only character consistently funny from start to finish. Actors Jermaine Fowler and KiKi Layne offer strong performances, but are undercut by their limited roles. If given a bigger spotlight, the duo could have been the hidden gold this film desperately needed. Frankly, aside from them, there isn’t much aside to praise.

Weak Spots: “Coming 2 America” is a horribly written comedy that justifies all the fears fans had about a sequel. There is no John Landis (co-director of the original), and Eddie Murphy isn’t as involved in the story. This time around, there are three screenwriters: the original duo of Barry W. Blaustein and David Sheffield, along with “Black-ish” creator Kenya Barris. The film is written as a course correction of the first movie because the 1980s weren’t as woke and politically correct as today.

The central plot is focused on the sexist traditions of Zamunda; the country won’t allow a woman to be its leader. Instead, it tries to build up a burnout from Queens, due solely to his male birthright. Also, the dialogue constantly makes references to how sexist the original film was. Apparently, the writers thought shaming a beloved fan favorite for black audiences because it’s not up to progressive standards would win them over.

A story dipped in progressivism is only one of the film’s problems. Originality is an issue. The core story is simply a rehash of the first movie, done in reverse. Instead of Eddie coming to America to find love, his son comes to Zamunda to do the same. There are many callbacks to the original, which just reminds the viewer that it was a much funnier movie. And that the sequel is a train wreck.

Every cheap trick the filmmakers thought would be a hit with fans is visible — including the running gag of McDowell’s, the fictional fast-food restaurant from the original that was only mildly funny once. The introduction of Akeem’s warrior daughters is only in service of the ending gag. Finally, the comedy styles of Tracy Morgan and Leslie Jones are flat.

The Takeaway: “Coming 2 America” is a film that never needed to exist. The best-case scenario would have been setting up a story for future characters that allowed for world building and high jinks. But the sequel can’t get out of its own way long enough to craft a credible story line. At this point, audiences can only pray Hollywood doesn’t try to revisit the franchise when Murphy turns 80. Poor James Earl Jones.

See or Skip: If you loved the 1988 original, “Coming 2 America” begs the question: “How does it feel to have lived long enough to see all of your favorite franchises go down in flames?”