Cheetahs May Return To India After Over 70 Years

Government as well as Ambanis working on projects to bring the spotted animal back.
By Ritaban Misra March 9, 2021
Facebook
Twitter
Linkedin
Email 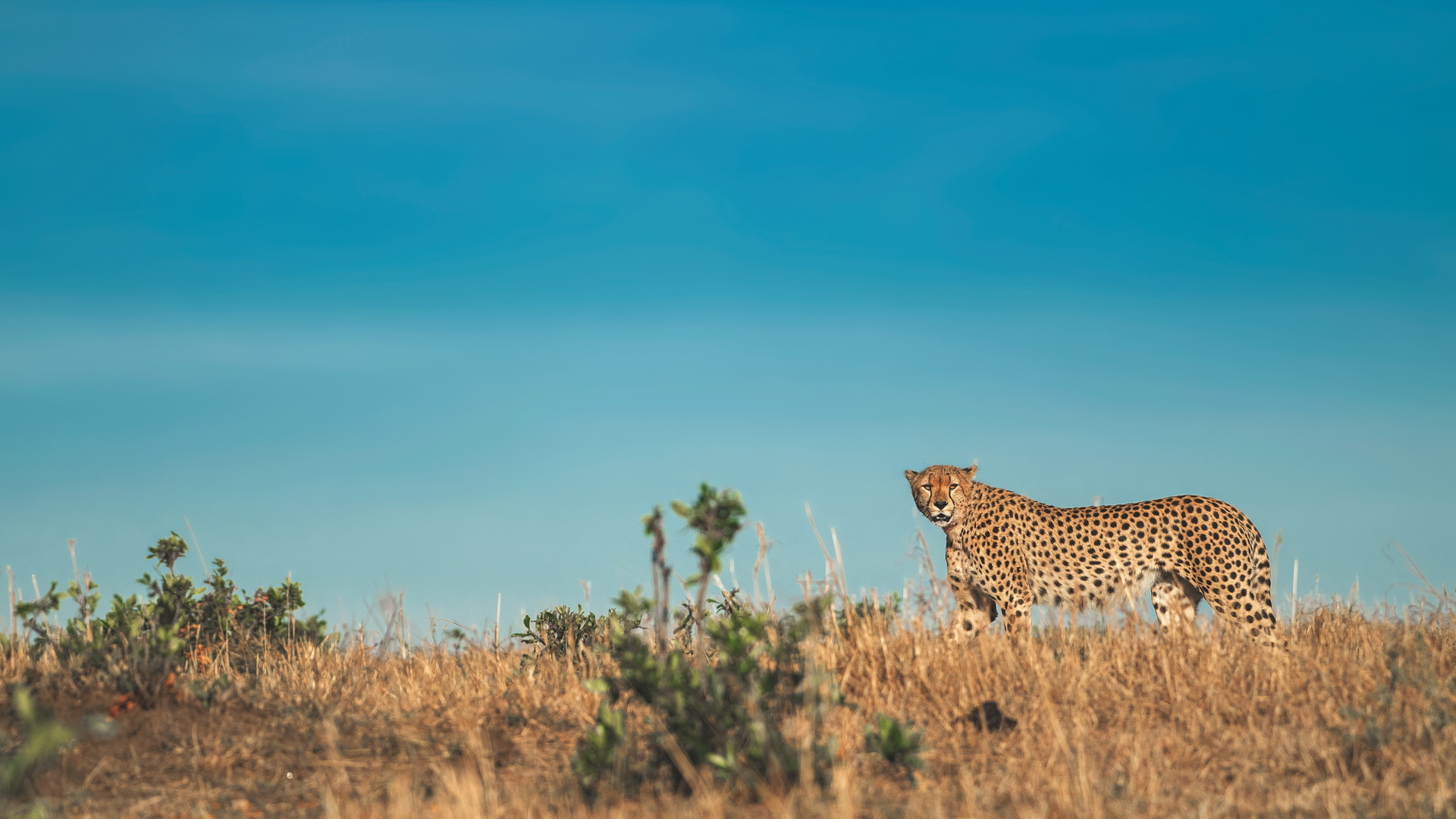 The government failed to reintroduce cheetahs in the 1970s when it considered a swap of the Asiatic cats between India and Iran. (Keyur Nandaniya/Unsplash)

PUNE, India — “India has thriving wildlife and biodiversity — 70 percent of global tiger population, 70 percent of Asiatic lions, 60 percent of leopard population. The @narendramodi government is working on the reintroduction of the Cheetah, which went extinct in 1952. This Big Cat will be a reality soon,” Indian Minister of Environment, Forest and Climate Change, Prakash Javadekar, tweeted recently with the hashtag #WorldWildlifeDay.

The last [three] recorded Asiatic Cheetahs [in India] were shot by Maharaja Ramanuj Pratap Singh Deo of Koriya [a princely state of British Empire in India in the state of Chhattisgarh] in 1947, according to a tweet by Indian Forest Service officer Parveen Kaswan. Some reports also state a female cheetah was spotted in 1951 and after a year India declared the animal extinct.

The Asiatic cheetah, tan-colored and specked with characteristic black spots weighing up to 143 pounds, is one of the world’s most critically endangered big cats. The word cheetah is derived from the term ‘citraka’ which, in Sanskrit, means the “spotted one”. In the 16th and early 17th centuries, the Mughal emperor Akbar kept more than 1,000 cheetahs as his hunting companions. 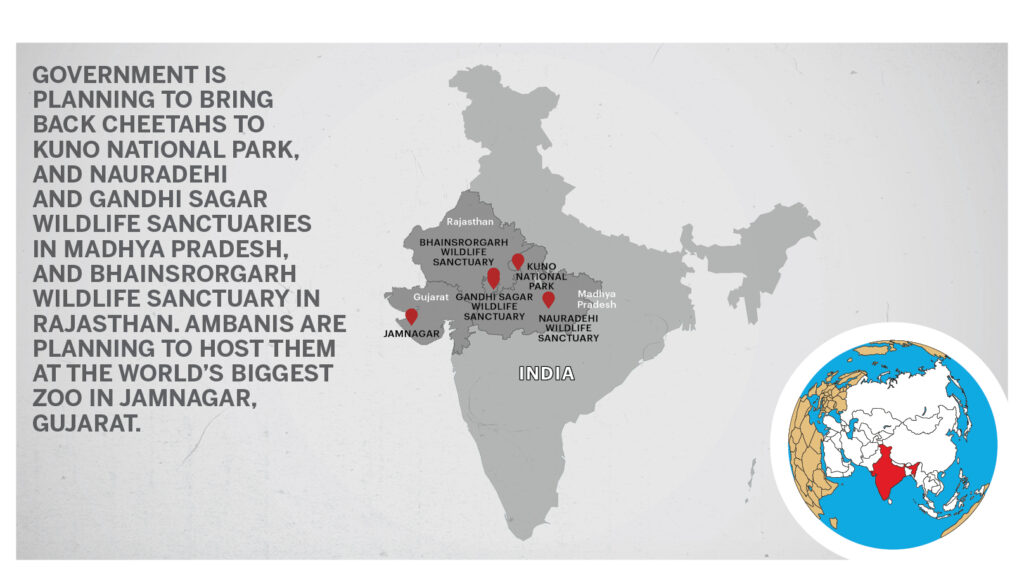 Cheetahs are listed as “Vulnerable” in the International Union for the Conservation of Nature (IUCN) Red List, but after a recent study revealed significant population declines, scientists are calling for cheetahs to be listed as “Endangered.”

There had been efforts on the part of previous governments to reintroduce the Asiatic cheetahs, too, but they did not go according to the plan. In early 2020, the Supreme Court of India agreed that wildlife authorities can reintroduce the cheetah to India.

“Delighted that Supreme Court has just given OK to reintroducing cheetah from Namibia [in southwest Africa]. This was something I had initiated 10 years ago,” tweeted Jairam Ramesh after the decision was announced on January 28, 2020. Ramesh was Indian Minister of State at the Ministry of Environment and Forests from May 2009 to July 2011.

Under Appendix I of the Convention on International Trade in Endangered Species (Cites), the cheetah has been protected since July 1, 1975, which means commercial international trade in wild-sourced cheetah is prohibited. Among the 7,100 cheetahs left on the planet, almost all of them are African cheetahs, while the Asiatic ones are just 50 in number confined in Iran.

“We found Kuno National Park, Nauradehi Wildlife Sanctuary, and Gandhi Sagar Wildlife Sanctuary in Madhya Pradesh, and Bhainsrorgarh Wildlife Sanctuary in Rajasthan suitable for translocation of cheetahs because of an appropriate geophysical feature of forests,” Dhananjai Mohan, director of the Wildlife Institute of India, said after an assessment of cheetah introduction sites and proposed actions. “The areas are well protected and have well-managed grassland.”

On their arrival, the animals are proposed to be kept at an enclosure in Mukundara Hills Tiger Reserve in Rajasthan, before being shifted to individual reserves.

“The enclosure in Mukundara can immediately be used to bring cheetah into India and allow these animals to acclimatize before their release at other select sites. Also, Mukundara enclosure after extension can serve to hold a secure population of 3-4 cheetah breeding units and can be used to produce cheetah for reinforcements of reintroduced populations,” said this report of the Wildlife Institute of India.

“Cheetahs also do thrive well in captivity like other cats,” Debasish Karmakar, a professor of Zoology from the University of Calcutta, told Zenger News. “Cheetahs, being the smallest of the African cats, are subjected to fierce competition for food against lions and leopards in the parks, and they end up starving, this ends up defeating the whole purpose of keeping them in sanctuaries.”

The reintroduction of cheetah in India would be based on certain parameters, feels K Thangaraj, the chief scientist of the Centre for Cellular and Molecular Biology. It will mainly base upon how different the two populations of a cheetah — African and Asiatic — are.

“The farther back they diverged along with evolution, the more different these two populations would be from each other,” said Thangaraj. “We have analyzed three distinct cheetah samples — the skin of a cheetah believed to be shot in Madhya Pradesh in the 19th century from mammal gallery of the Zoological Survey of India, Kolkata, the second was a bone obtained from Mysore’s Natural History Museum, dates to 1850–1900, and the third was a blood sample of a modern cheetah from Nehru Zoological Park, Hyderabad.”

Cheetahs have been in the headlines in India for quite some time. Anant Ambani, the youngest son of India’s richest man Mukesh Ambani who is the chairman of Reliance Industries Limited, is building the largest zoo in the world in Jamnagar in the western Indian state of Gujarat called Greens Zoological Rescue and Rehabilitation Kingdom.

This pet project of junior Ambani — to be built on 280 acres of land — is expected to be inaugurated by 2023. Cheetah has been provisionally shortlisted in the list of animals that would be kept in the zoo along with African lion, jaguar, Indian wolf, Asiatic lion, a pygmy hippo, orangutan, lemur, fishing cat, sloth bear, Bengal tiger, Malayan tapir, gorilla, zebra, giraffe, African elephant, and Komodo dragon.

It’s not clear where Ambanis would get their cheetahs from but the government’s decision to import cheetahs has been regarded as an act of gloating by environmentalists across the country.

“The plan to reintroduce the cheetah to India is a noble move, but factors that led to the animals’ extinction in India like hunting, wildlife trafficking, and the reduction of forests still exists with climate change, population pressure, unplanned urbanization, and increasing cases of human-wildlife conflict added to the mix,” said Khushboo Gupta, chief advocacy officer of People for the Ethical Treatment of Animals in India.

“We have a lot of wildlife that are on the verge of extinction in our country. Instead of taking care of them, our government is trying to reintroduce the ones that are already extinct,” said Anmol Ohri, founding director of Climate Front India, an environmental conservation organization.

“With so many protests going on regarding environmental issues, the government had to come up with something to show they are concerned about Indian wildlife,” said Ohri.

The government failed to reintroduce cheetahs in the 1970s when it considered a swap of the Asiatic cats between India and Iran. Today, a critically endangered population of roughly 50 Asiatic cheetahs survives in Iran, but four decades ago, hundreds lived there. India, for its part, had several hundred Asiatic lions, which Iran wanted to reintroduce.

The deal failed because the government could not provide the prey base that was required to breed cheetahs. As the country’s grasslands were repurposed for agriculture, both the cheetah and its prey were pushed into suboptimal habitats, where they struggled to survive.