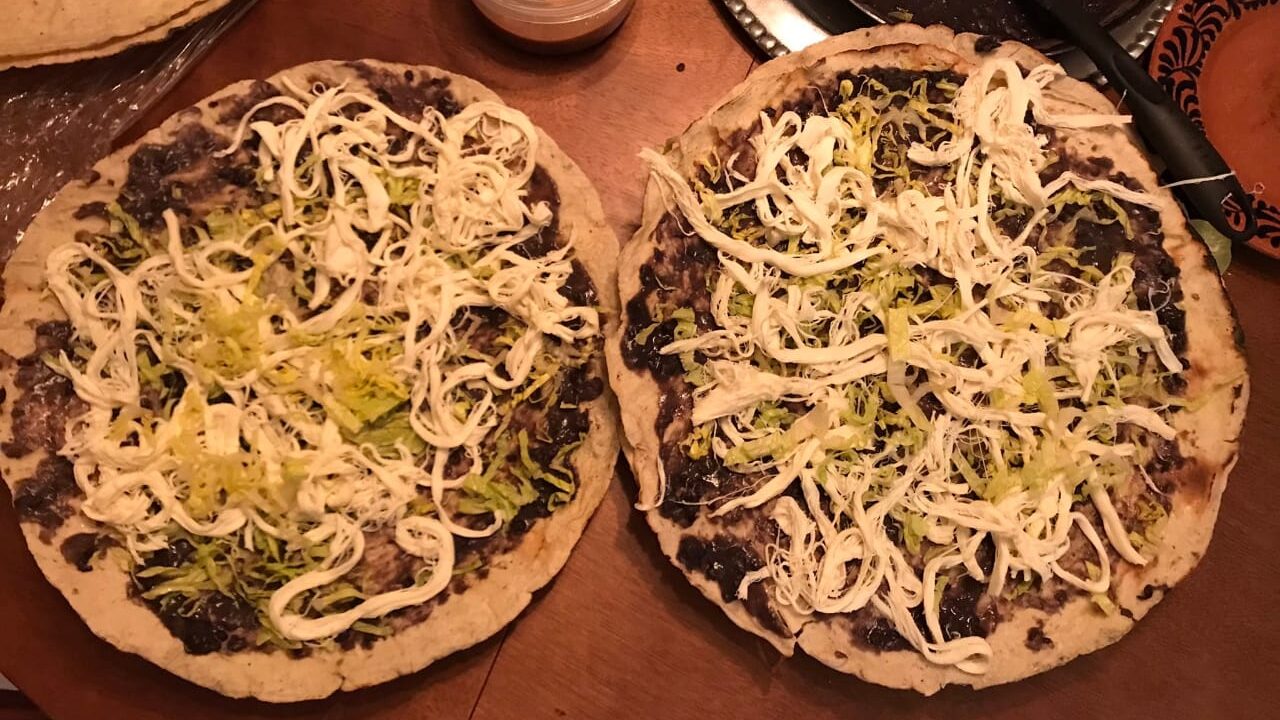 Tlayudas can be up to 20 inches long. Traditional cooks bake them for hours, giving them a thick and firm texture. (Christian Valera Rebolledo/Café Words)

The southern Mexican state of Oaxaca is known for its award-winning food culture. One of its outstanding dishes is the tlayuda.

Tlayudas are gigantic tortillas with beans on top. Their diameter can reach up to 20 inches. Diners enjoy them spread out or folded into a taco with or without toppings. People praise their texture, as tlayudas are thick, firm and consistent.

“For us Oaxacans, tlayudas are like an expression of love, because of the symbolism they have outside of Oaxaca and the great work that goes into making them properly,” said Sandy Méndez, a native of the state.

Tlayudas have been worthy of awards. Twitter users crowned them as the best “Street Food in Latin America,” voting in a Netflix poll in 2020. The contest increased the tlayuda’s fame abroad.

Tlayudas “are not tacos; they are not enchiladas; they are not tostadas. In Oaxaca, it is common to find tlayuderas, women selling tlayudas, sitting in the markets,” Méndez said, adding that one may also find them selling on street corners and from house to house in particular neighborhoods.

To make a tlayuda, they mix the corn with water and lime in a process called nixtamalization. Zapotec women learned this cooking method from their pre-Hispanic ancestors, who soaked corn in a pot with alkaline water for up to 12 hours.

After this process, women shape the tlayudas and bake them in comales (flat clay griddles). Finally, they bag the enormous tortillas for sale.

In restaurants, customers top their tlayudas with the ingredients of their choice. While some want them plain to accompany their meals, others turn them into a dish by adding lettuce, cabbage, tomato and avocado, on top of the essential ingredients: beans and Oaxaca cheese.

“I tried a tlayuda for the first time at age 9,” said Eduardo Vargas, a 26-year-old Mexican engineer and graduate student. “My mother took me to a place near a park [where we bought them].”

Vargas said that while tlayudas seem easy to prepare, there is a big difference between a good and bad one.

“There are tlayudas and tlayudas. Sometimes they are very toasted, and the tortilla is way too hard. Good tlayudas are crispy,” he said. “Without question, the best tlayudas are those from Oaxaca. When I tried the original ones, from there, I felt the difference.”

1 cup of cabbage or lettuce

Heat the tlayudas in a comal or skillet, making sure they do not burn. Spread lard and the previously heated beans on their surface. Sprinkle cabbage or lettuce on top of the beans, followed by cheese. Add on top the previously cut tomatoes, peppers, avocado and radish. Serve while warm.

«Previous Post
Mental Health In The Age Of Zoom »Next Post
Chimichangas Are A Cultural Bridge At U.S.-Mexico Border