The fossils on the roof of a cave in the Bhimbetka remained hidden for centuries because of low light, claim experts.
By Saptak Datta March 6, 2021
Facebook
Twitter
Linkedin
Email 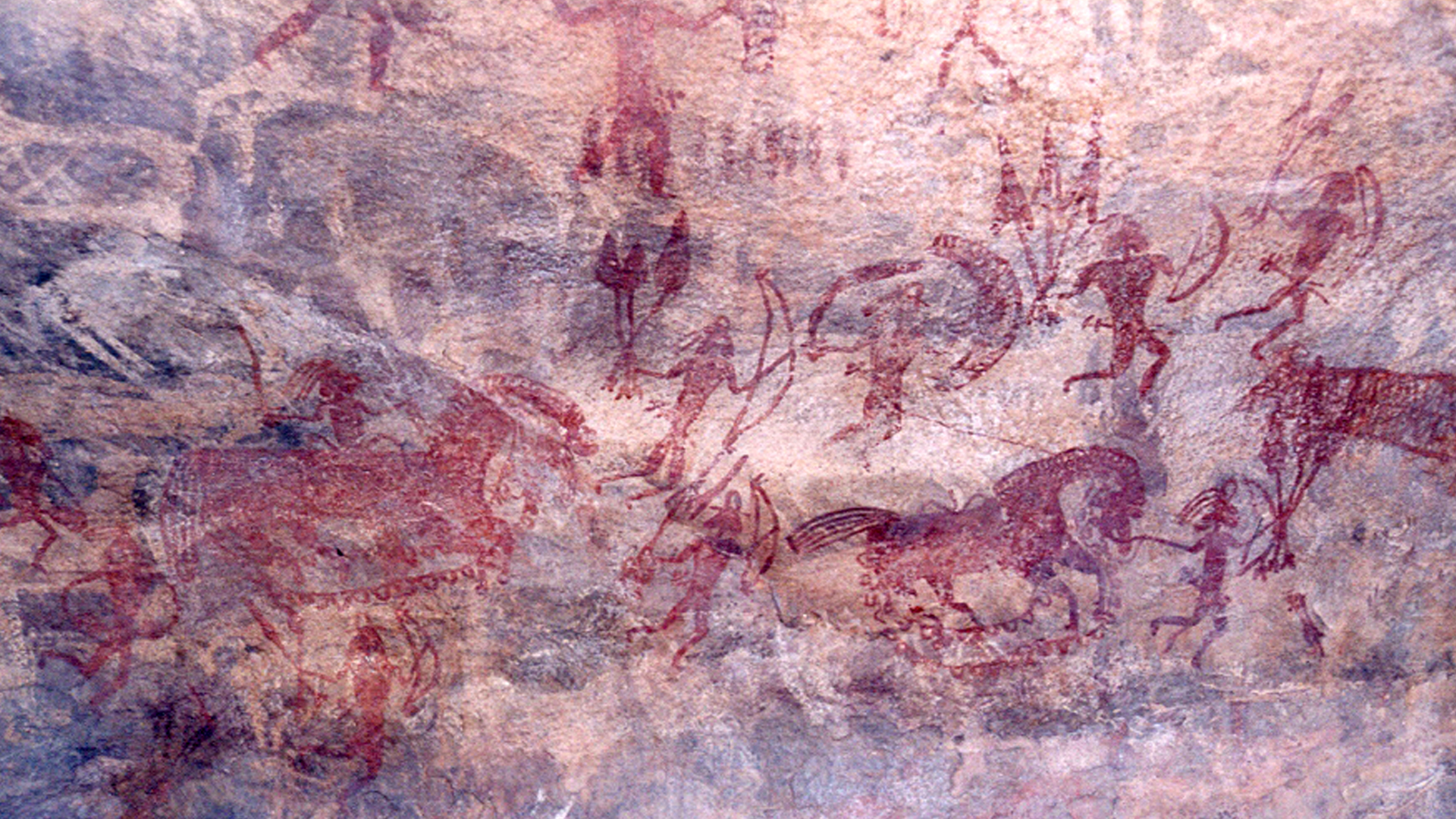 About 600 million years ago, the Dickinsonia — a flattened oval creature that was one of the earliest multicellular lifeforms on earth — roamed the rocky regions in central India. Now, a group of scientists has discovered its fossils on the roof of the UNESCO heritage Rock Shelters of Bhimbetka.

The Dickinsonia lived during the late Ediacaran Period (635-541 million years ago) and comes right before the Cambrian Period — “the time when most of the major groups of animals first appear in the fossil record”, according to experts.

It was once believed that the first and oldest fossil animals were to be found on the Cambrian strata of rocks, but now these — such as the Dickinsonia — are found in the Ediacaran strata.

“It [the fossil] remained unnoticed for so many years possibly because of low light in the ceiling area of the cave and might have been camouflaged with the petroglyphs (image created by removing part of a rock surface) and cave paintings,” Arindam Roy, senior geologist, Geological Survey of India, told Zenger News. 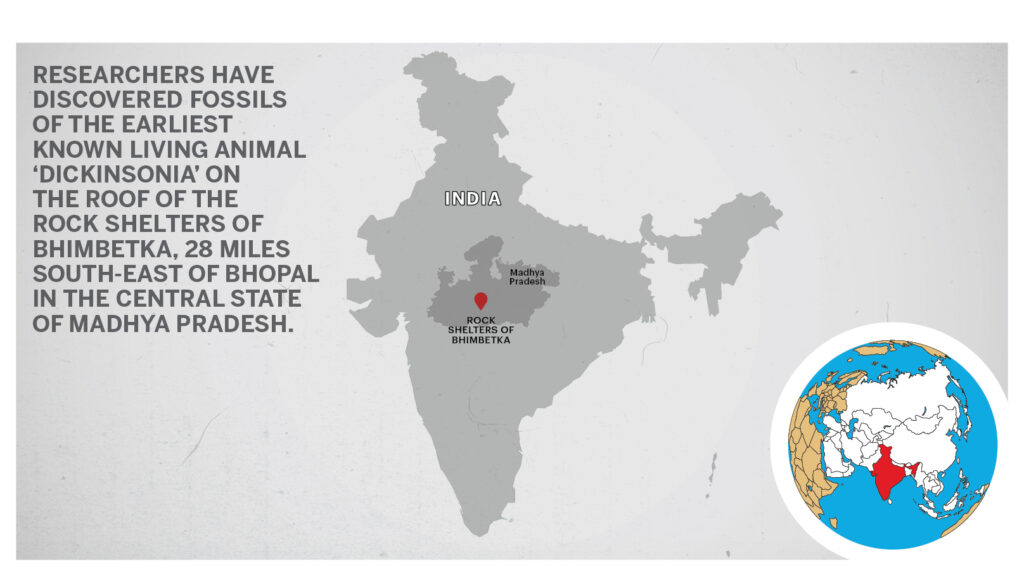 “Portions of the fossils are obscured by soot and a tracery of white waxy material,” he said. “Moreover, the Bhimbetka rock shelters being a world heritage site for Mesolithic cave art, it is of prime attraction to archeologists than to paleontologists (experts for fossils).”

The Bhimbetka rock shelters are about 45 kilometers (28 miles) south-east of Bhopal, the capital of the central state of Madhya Pradesh.

“The rock shelters of Bhimbetka are in the foothills of the Vindhyan Mountains on the southern edge of the central Indian plateau,” says UNESCO. “Within massive sandstone outcrops, above the comparatively dense forest, are five clusters of natural rock shelters, displaying paintings that appear to date from the Mesolithic Period right through to the historical period. The cultural traditions of the inhabitants of the 21 villages adjacent to the site bear a strong resemblance to those represented in the rock paintings.”

The cave in which the fossils were discovered is also known as the Auditorium Cave because of its size.

The findings were published in the February edition of “Gondwana Research”, a peer-reviewed scientific journal with an emphasis on the origin and evolution of continents.

“The discovery of the Dickinsonia in India allows assessment of biogeographic provinces [area of animal and plant distribution having similar or shared characteristics throughout] and plate tectonic reconstructions [the process of reconstructing the positions of tectonic plates] for the late Ediacaran,” states an abstract from the paper, “Dickinsonia discovered in India and late Ediacaran biogeography” by Gregory J. Retallack, professor at the Department of Earth Sciences in the University of Oregon.

“The fossils are identical with the species of fossil which was discovered in South Australia. This fossil also shows deformation due to pieces missing in the fossil which have disturbed the alignment.”

The fossil was accidentally discovered by experts from the Geological Survey of India who were on a tour to the Bhimbetka ahead of the 36th International Geological Congress, which was scheduled for March 2020 but got postponed because of the pandemic.

“Many coelenterate genera (has simple tissue organization, with only two layers of cell) metazoans and oldest multicellular body fossils belonging to sponge from approximately 600 million years ago old rocks are recorded from different parts of the world,” said Roy.

He says groups of fossils found together in strata are significant to understand the explosion of life close to the boundary of the Ediacaran-Cambrian periods.

New fossils reported from the Maihar sandstone in Bhimbetka confirm the proximity of Australia and India during the Ediacaran Period. “This new occurrence confirms assembly of Gondwanaland 550 million years ago,” Roy said.

Is Dickinsonia the ‘world’s oldest animal’?

Scientists have discovered traces of animal life dating back to 635 million years. However, Dickinsonia, too, falls among the classified group of the oldest animal found on Earth. Helminthoidichnites, a worm-like creature, is of a similar age to that of the Dickinsonia.

“After considering a variety of alternatives, the researchers decided that the fossil organisms most closely resembled sponges,” states the study. “Evidence has suggested that sponges appeared on the scene much earlier in Earth history. Scientists have conducted detailed analyses of genetic material in a wide range of organisms to create ‘molecular clocks’ that suggest how long ago a given species evolved.”

According to these clocks, sponges existed millions of years before the Cambrian Period.

What are the Ediacarans?

Ediacarans were discovered in Ediacaran Hills in the Northern Flinders Ranges of South Australia in 1946. They had the vaguest resemblance to the modern life forms. Today, more than 50 types of Ediacarans are already discovered, on almost every continent.

Glaciations of global scale wracked the planet, intertwined with changes in oceanic and atmospheric chemistry and marked changes in continental configuration. It was during these dynamic and ‘weedy’ times that metazoans (animals made up of one type of cell) first appeared.

“These large and seemingly complex organisms were not truly multicellular,” said Adolf Seilacher in a study, “Rise and Fall of the Ediacaran Biota”. They had an asymmetrical body, a loose sandy fill skeleton, several ranges of designs that would be incompatible with metazoans, and unusual traces of resting patterns.

The Rock Shelters of Bhimbetka were found by V.S. Wakankar — an archeologist — 64 years ago. There are 1,000 rock shelters, out of which more than 500 rock shelters contain cave paintings. The total area is roughly about one hectare, and it is in the middle of the Ratapani Wildlife Sanctuary.

“It was first discovered on March 27, 1957,” said Dileep M. Wakankar, nephew of V.S. Wakankar. “There is a continuity of lifestyle from 30,000 years ago to 300 years ago in these rock shelters. Such a huge span where mankind continuously existed is not yet found anywhere in the world. New caves are still being discovered by archeologists. Around 600 archeologists are still working in the site.”

After the phase of Acheulean tools, Paleolithic, Mesolithic, and Chalcolithic came into existence. “Bhimbetka has shown the existence of human life in all three later ages,” said Narendra Vyas, an archeologist.