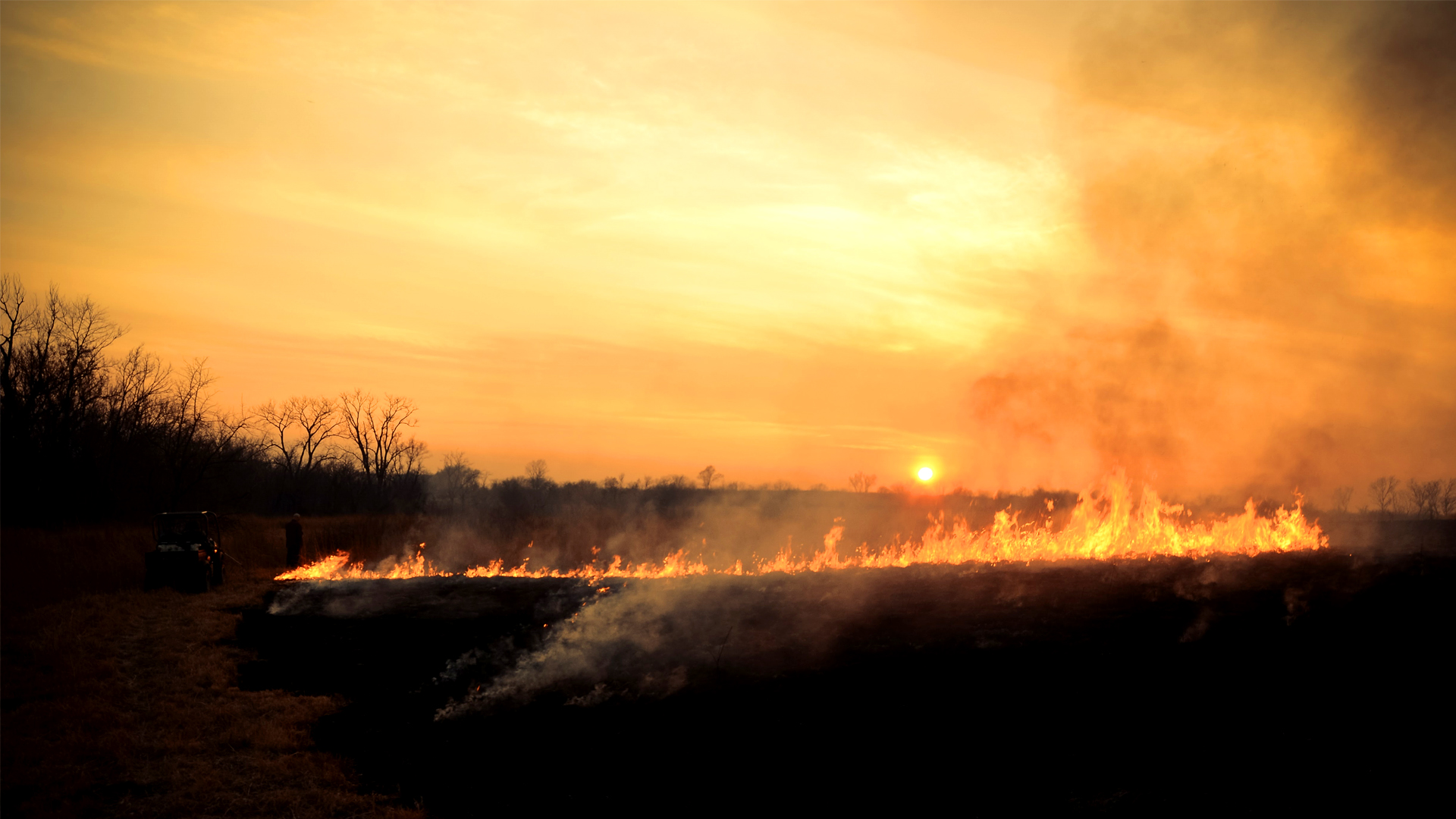 “My eyes have been burning for the past three days due to smoke from the Similipal Biosphere Reserve fire that started around Feb. 24,” Sudhanshu Khandapatra, 31, of a village in the Mayurbhanj district of eastern Indian state Odisha, told Zenger News.

His village, Jayantipatta Samil Jamudiha, at the foothills of Thakurmunda mountain ranges is less than 3 kilometers (1.8 miles) from the forest fire site.

He is clueless about how he will save his two small children. “They have been crying constantly due to the discomfort,” Khandpatra, who ekes out his living by making paper plates along with his wife, said.

UNESCO added the Similipal National Park to its list of biosphere reserves in 2009. It constitutes a tiger reserve, an elephant reserve, and a wildlife sanctuary. It is home to 50 percent of the tigers of the state of Odisha. It has 21 amphibian species, 62 reptile species, 362 bird species, and 55 mammal species. Besides, it has 1,076 flowering plant species. 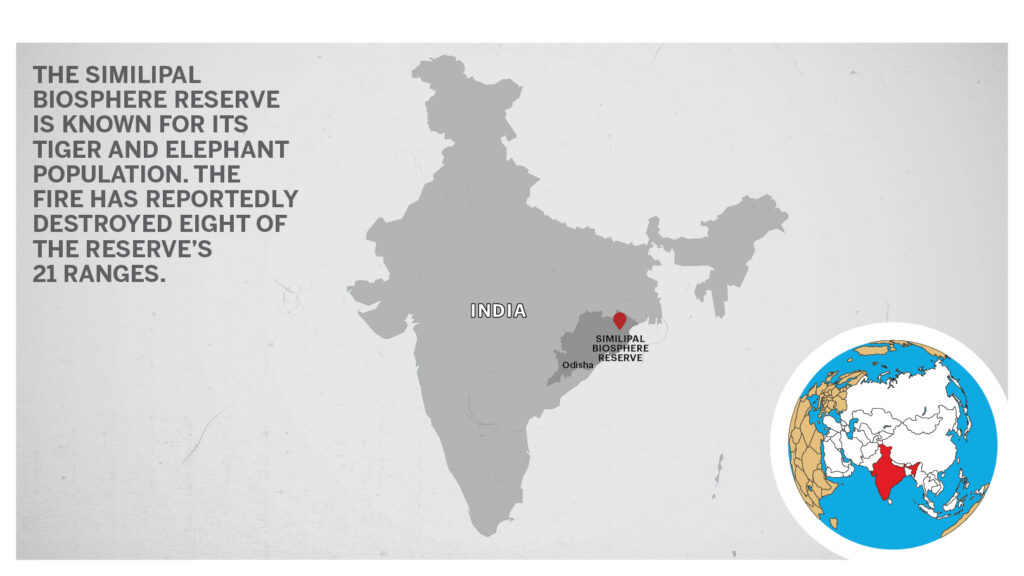 “I have never seen a fire of this scale in the Thakurmunda mountain ranges,” Khandpatra said.

The Odisha government released a statement saying the fire had been brought under control on March 4. “It is being misreported that it is a fire of large scale but in reality, small fire points are reported here and there that we douse every day,” J.D. Pati, deputy director of Similipal Tiger Reserve, told Zenger News.

Pati says 1,000 staff had been pressed into service to douse the fire, with 250 fire blowers machines and 40 vehicles.

“This reserve consists of dry deciduous and moist deciduous Sal forest that shed leaves on a large scale during winter, which catch fire due to human activities. It creates only ground fire instead of crown fire like Himalayan states,” said Pati.

India’s Minister of Environment, Forest, and Climate Change Prakash Javadekar asked the state government for a detailed report on the fire, sharing a tweet from a fellow minister who raised alarm over the issue.

Odisha Chief Minister Naveen Patnaik’s office tweeted on March 3: “Chief Minister @Naveen_Odisha reviewed the situation following the forest fire in Similipal National Park and asked officials to take preventive measures to control it. CM said Similipal is an invaluable treasure not only for the country but also for the entire world.”

The government has not yet assessed the damaged area.

“Only fallen leaves got damaged in this fire instead of plantation trees or bamboo trees or loss of animals, so we haven’t made an assessment,” said Pati. He emphasized that the fire hasn’t spread to the core of the forest area and is confined to the foothills. But his claim was questioned by a forest conservation activist.

“The inferno has burnt down eight out of the 21 ranges of the Simlipal forest division. Earlier, government officials refused to accept that there was a fire in the forest, now they are rejecting the concept of damage,” Vanoo Mitra Acharya, a conservation activist who was appointed honorary wildlife warden by Odisha in 2012 for his work in Similipal Biosphere Reserve, told Zenger News. He stepped down from the post in 2016.

“My conservative estimate of damage is of at least 100 square kilometers (38.6 square miles) both in buffer and core areas of the forest, which includes a large number of reptiles and insects and their habitats,” said Acharya.

According to the Forest Survey of India’s real-time forest fire monitoring system, as of March 4, there were six large active fire incidents in five ranges of the Similipal Biosphere Reserve.

A major fire outbreak happened in Karnataka’s Nagarhole National Park And Tiger Reserve on March 4. In December 2020, a massive wildfire had broken out in the pristine Dzukou valley that straddles the states of Nagaland and Manipur in India’s northeast. And, a massive fire in Uttarakhand in 2016 reportedly devastated more than 2,000 hectares of forest.

To reduce incidences of fire by informing, enabling, and empowering forest fringe communities and incentivizing them to work with the state forest departments, the government had come up with a National Action Plan on Forest Fires in 2018. The plan also sought to enhance the capabilities of institutions in fighting forest fires.

The forest fire alert system of the Forest Survey of India, which was started in 2004, has also undergone significant improvements in recent years. This report states that the user base of the alert system grew from around 2,000 in 2017 to more than 66,000 in 2019. 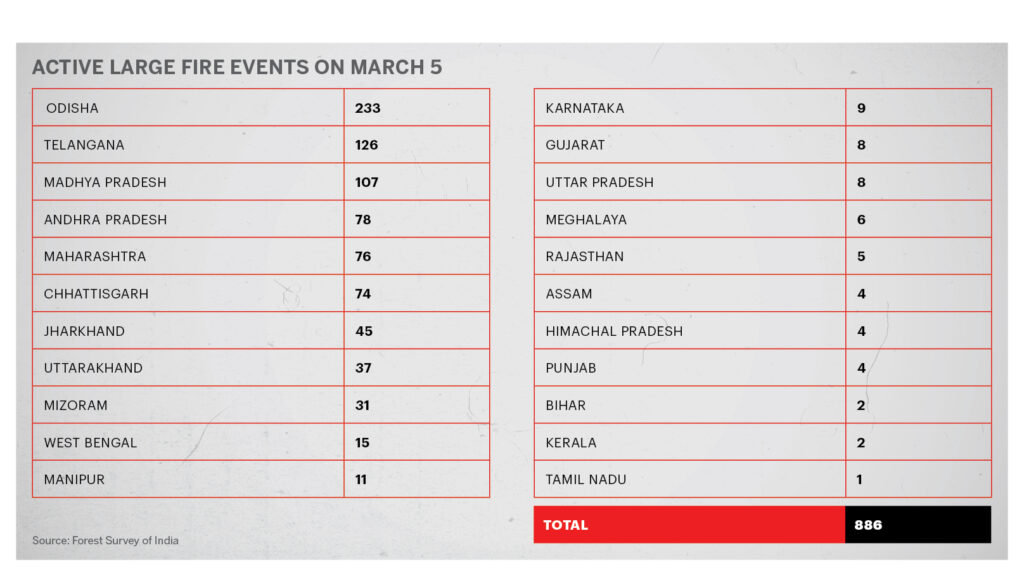 Controlled forest fire is a natural phenomenon and many parts of the Earth burn at some point in time. It helps the forest to clear dead woods, leaves, competitive vegetation, and allows newer growth.

The Forest Survey of India agrees that fires cause large-scale destruction of forest resources and biodiversity in the country every year. “One forest fire incident may nullify all efforts of conservation and plantations done in the past several years,” it states in a report.

“The annual losses from forest fires in India for the entire country have been moderately estimated at INR 440 crores ($107 million). This estimate does not include the loss suffered in the form of biodiversity, nutrient and soil moisture and other intangible benefits,” a Food and Agriculture Organization of the UN study states.

Another 2019 Forest Survey of India report states that forest fires in the country are mostly of anthropogenic (human activities) origin and, therefore, preventable to a large extent. “They [forest dwellers] choose to light up dry leaves so that they can easily collect Mahua fruits to sell them,” said Pati.

But Acharya blames poachers. “In the past few years, there is a rising trend of poaching activities in the reserve on which government officials failed to act. These poachers light fires to catch animals,” said Acharya.

Ajay Kumar Saxena, a Delhi-based forest management consultant, says local people who live on the fringe of the forest and depend on the forest for their livelihoods should be included in the planning and management of the forest. “They would help in monitoring and controlling a forest fire,” Saxena told Zenger News.

“Climate change accelerates the degradation of forest, which subsequently increases the chances of forest droughts. The early arrival of summer with illegal acts by poachers have caused the fire,” said Ranjan Panda, convener at Combat Climate Change Network, while asking for fixing of accountability.

(Edited by Amrita Das and Uttaran Dasgupta. Map and graph by Urvashi Makwana.)