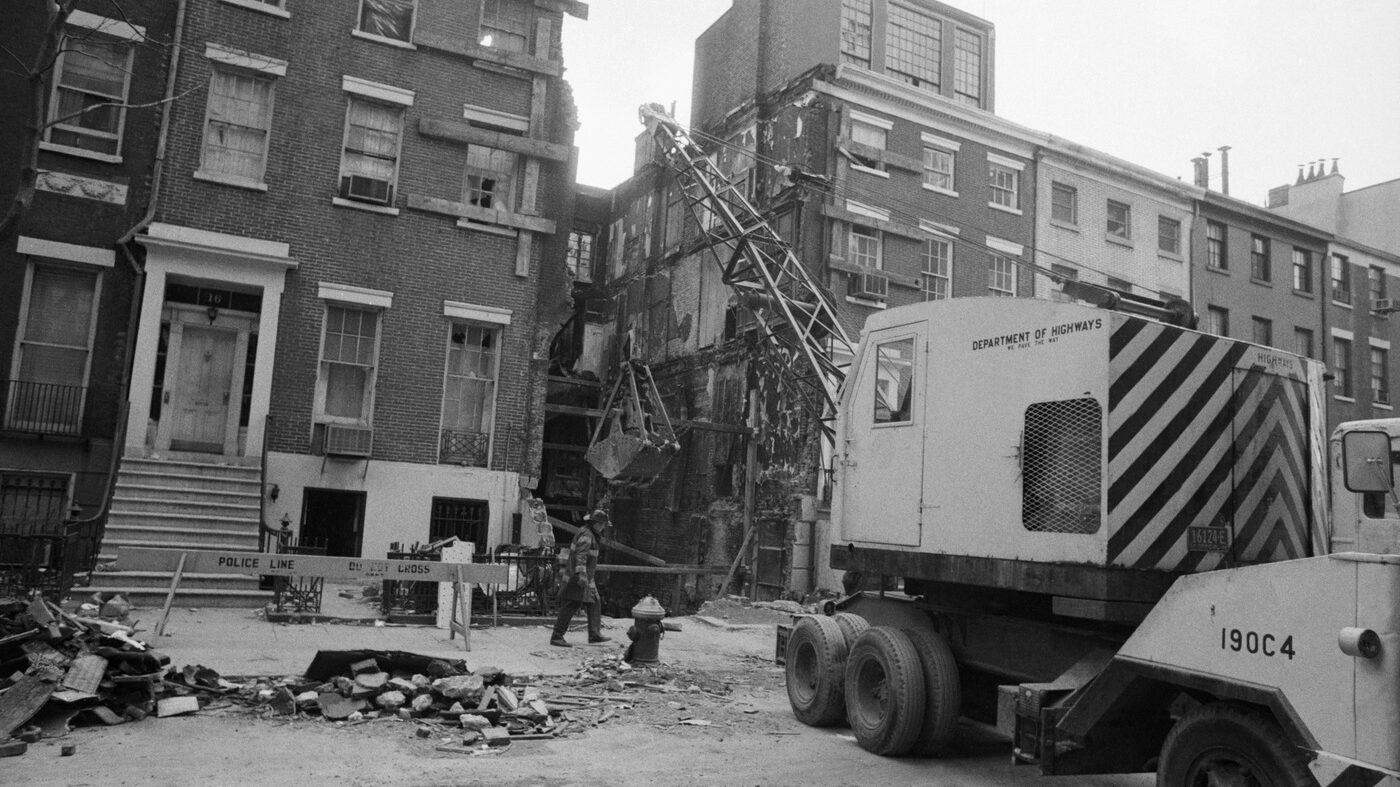 Three members of Weather Underground (Ted Gold, Diana Oughton, and Terry Robbins), a radical left-wing group, die when a bomb they were building accidentally detonates in the basement of a townhouse in Greenwich Village. Police would later find 57 sticks of dynamite, four bombs, detonators, and other bomb making materials in Greenwich Village in Manhattan on Mar 6, 1970. (Bettmann/Corbis via FBI)

NEW YORK — March 6 marks the 51st anniversary of the day three members of a paramilitary leftist group were killed in New York City when they accidentally detonated bombs they were building.

Authorities later learned the bombs, which included more than 57 sticks of dynamite and a 1916 Civil War anti-tank shell, were being constructed to target an Army’ dance at nearby Fort Dix in New Jersey and the Butler Library at Columbia University in effort to bring the violence of the Vietnam War home to the American public.

Boudin and Wilkerson were added to the FBI’s 10 Most Wanted Fugitives list following the blast. Other key members, including Bill Ayers and his wife Bernardine Dohrn, were forced into hiding as a nationwide manhunt was launched to apprehend them.

Taking its name from the Bob Dylan lyrics “you don’t need a weatherman to know which way the wind is blowing,” from the song “Subterranean Homesick Blues,” the Weather Underground was a more militant faction of a student protest group, Students for a Democratic Society, at the University of Illinois in 1969.

The faction allied itself with the Black Liberation Movement, notably the Black Panthers, and protested against the Vietnam War, via a campaign of bombing government offices, including the Pentagon, the U.S. Capitol and several police stations in New York City and Chicago. It also supported various social-justice issues, including racial equality and gay rights.

Ayers, a retired professor from the University of Illinois at Chicago, reflected on the explosion as a turning point for the group, in which its violence harmed people rather than property.

“I’ve marked March 6 every year since 1970,” Ayers said, noting that he participates in a ceremony in New York every year. “My pain from the loss is ever-present.”

The group lost members and public support after the blast, according to Ayers, which sent he and his wife into hiding in 1970.

When the couple emerged in 1980, neither faced severe legal repercussions. Dohrn pleaded guilty to charges related to a 1969 anti-war protest and received a $1,500 fine and three years probation. Ayers did not face any charges, due to the government’s illegal use of wiretaps and other surveillance while investigating him.

Three years earlier, Wilkerson surrendered to authorities and was sentenced to three years in prison for dynamite possession charges related to the townhouse explosion.

Boudin was later arrested in 1981 following her participation in a Brink’s armored car robbery, which resulted in the deaths of a security guard and two police officers. She spent 22 years in prison and was paroled in 2003.

In the years since the blast, some former members have expressed regret over the violent tactics. Mark Rudd, another Weather Underground member, has since repudiated violence as a political weapon.

Ayers, however, said the violence was necessary to try and stop the war.

“I don’t believe what I did was crazy,” he said.

He compared his group’s bombing of the U.S. Capitol, which resulted in $1 million in damage to a computer system used for picking targets in Vietnam, to the violence of the U.S. military toward the Vietnamese people.

“Vietnam was a genocidal, terrorist war that was killing 6,000 people each day … and we were trying to end that war,” he said.

“The townhouse represents the nadir of a moment when the movement was teetering on the brink of whether to continue with violence against representations of power, such as police stations and government buildings,” said Thai Jones, whose parents Jeff Jones and Eleanor Raskin, were Weather Underground members.

“I believe violence was part of the reality of those times. We would never say it shouldn’t be considered or that it never works … because history has shown it does … but the real distinction is terroristic violence against people, as the U.S. military used in Vietnam, as opposed to symbolic violence used against property and government buildings,” said Jones, an author and journalist who has written about radicals and now teaches at Columbia University.

Jones believes the Weather Underground movement “contributed to a shortening of the Vietnam War and to President Nixon’s self-destruction.”

“Morally, I’m not outraged at the idea of exploding a couple of toilets in the Capitol. It didn’t seem to be a disproportionate response to what was happening in Southeast Asia,” he said, adding the group typically avoided injuring people and called in warnings in advance.

Jones compared the Weather Underground’s violent tactics to the deadly Jan. 6, 2021 attack on the U.S. Capitol. Ayers told Zenger that “no one of any good conscience can support what happened on Jan. 6.”

David Viola, who teaches at John Jay College of Criminal Justice and has served as an intelligence officer with Special Forces, said both the Weather Underground and the Capitol rioters had “moral certitude” of their cause.

He said law enforcement must step up cyber efforts to track extremists and disrupt efforts to recruit new members via social media but also stressed that authorities have to be careful not to “violate people’s civil liberties” during investigations, as was done to some members of the Weather Underground. That caused charges against several people, including Ayers, to be thrown out.

Jones, who said one of his earliest childhood memories was of the “FBI breaking down our door in the Bronx and arresting my parents,” lamented that former President Donald J. Trump’s term felt “roughly equivalent to the years leading up to the townhouse explosion. The mindset of antiwar radicals feels more familiar now than it has in the past decade.”

Ayers, now 76, continues to teach, host guests on his podcast and advocate for social-justice causes, including Black Lives Matter.

“When I’m in public square, people want me to renounce my former philosophy, but I don’t regret my militancy for a minute,” he said. “Each day, I get up and just put one foot in front of the other.”