Habitat destruction likely to be the main threat in the Asian part of the animal's range.
By Pallavi Mehra March 5, 2021
Facebook
Twitter
Linkedin
Email 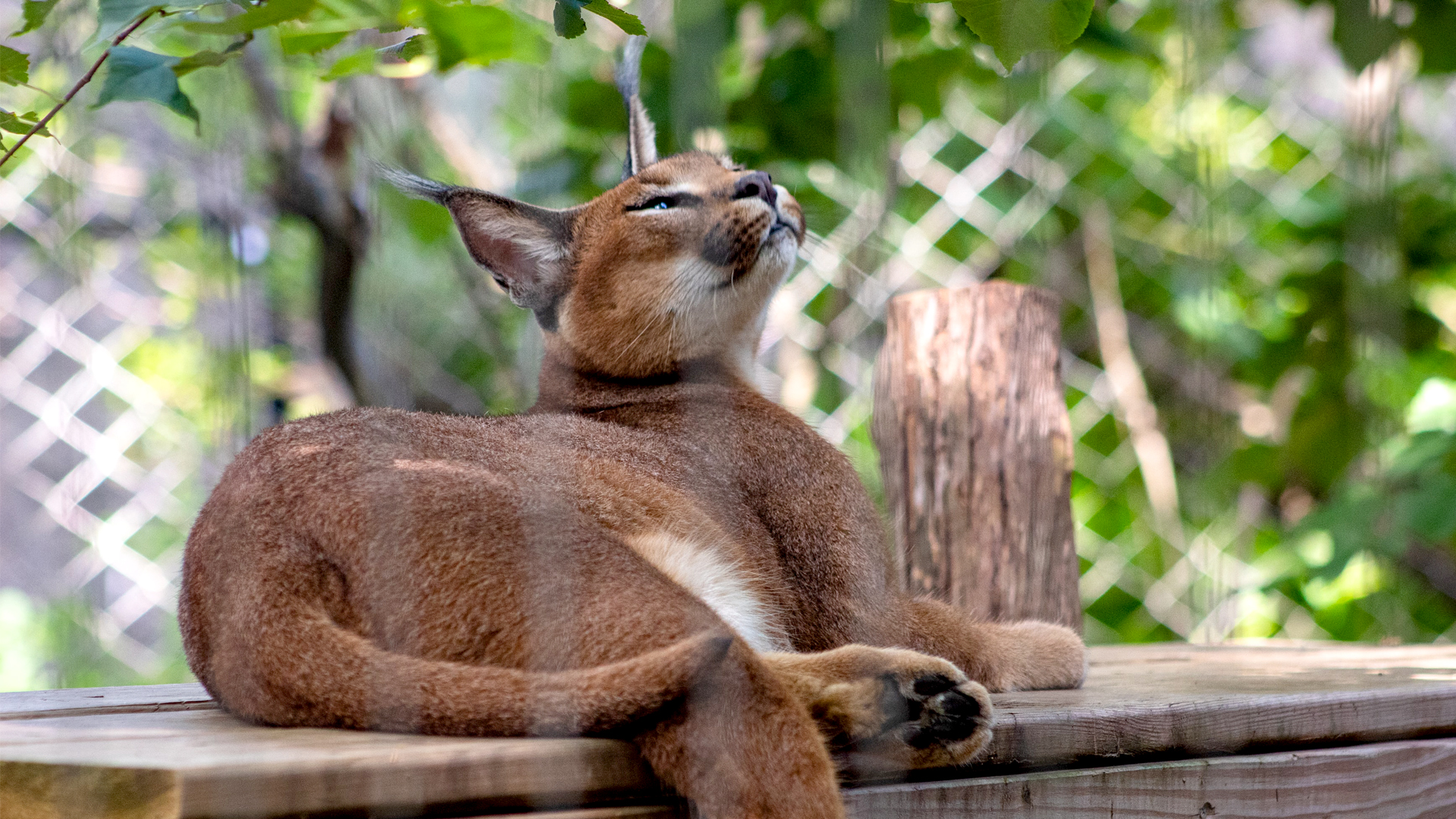 Caracals, wild cats characterized by long tufted ears, are listed as “least concern” in the International Union for Conservation of Nature Red List, but they are disappearing from India, which recently listed it as a “critically endangered” species.

“I started monitoring caracals more than 10 years ago and have more than 40,000 camera trap recordings (from different times) but have never come across one in real life,” Randeep Singh, biologist, researcher and assistant professor at Amity University in Noida near the Indian capital of New Delhi, told Zenger News.

“There was enough talk around the bigger cats, so I wanted to find out about the ones out of the limelight but endangered. I have approximately covered 250-300 sites in Ranthambore with camera-trapping. I chose Ranthambore to do this due to the confirmed presence of caracals,” he said.

Ranthambore National Park is one of India’s largest national parks located in the western state of Rajasthan. 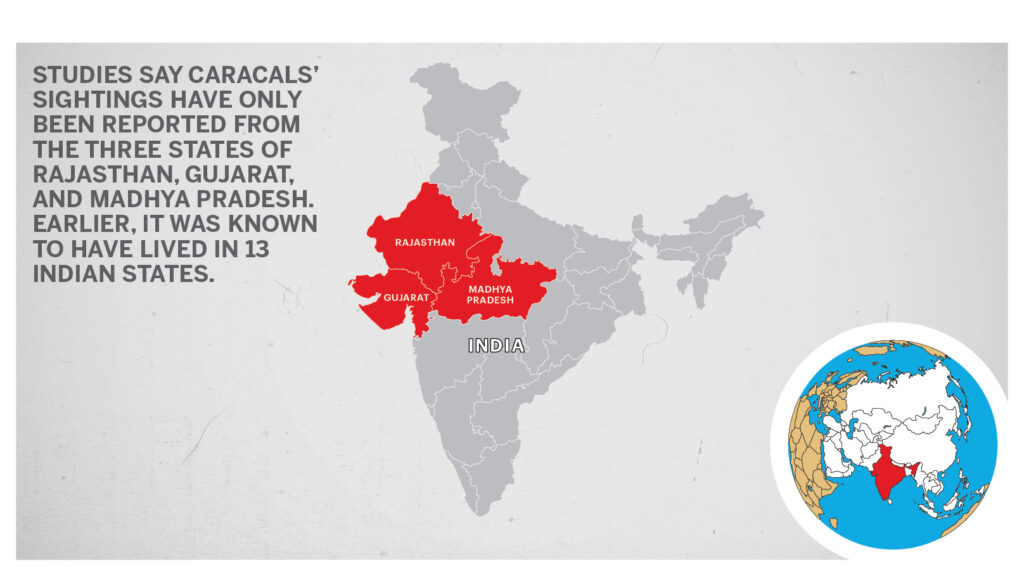 The word ‘caracal’ is derived from the Turkish word ‘karakulak’ meaning ‘black ear.’ The animal has been classified variously as ‘desert lynx’ but caracals have longer legs, a slender body, and the tail is considerably longer than true lynx. Caracal is widely distributed across Africa, Central Asia, and south-west Asia, including India.

In India, they are more known as ‘siya gosh’ (black ear in Persian), and the earliest evidence of the caracal in the Indian subcontinent is a fossil from the Indus Valley Civilization dating back to 3,000–2,000 BCE.

This species, famous for its litheness and ability to catch birds in flight, was used for hunting. During the reign of the Delhi Sultanate in India from the 13th to 16th Century, it was used as a coursing animal.

When the sultanate reached the peak of its geographical reach in India during the Tughlaq dynasty, one of its kings, Firoz Shah Tughlaq, was believed to have “established a provision known as ‘Siyah-Goshdar Khana’ in the 14th Century dedicated to the maintenance of a large number of coursing caracals.”

But now, a standing committee of the National Board of Wildlife, the apex body for all wildlife-related matters in India headed by Prime Minister Narendra Modi, in its 60th meeting on Jan. 5, 2021, included caracal into the list of critically endangered species, which already had 21 other species under recovery programs.

“Caracal is not very well-known and is a nocturnal animal. There are not many studies or researches on it, hence, it becomes essential to know more about them before it goes extinct,” Mohan Lal Meena, the chief wildlife warden with the Rajasthan government’s forest department, told Zenger News.

“To spread awareness about the same, our department has sent a proposal to the government. The work on ‘Save Caracal’ project has started and will soon be shared with the government authorities so that favorable conditions can be made to preserve the species,” Meena said.

As per the report, the count of caracals, which are known to live in 13 Indian states, is unknown. They roamed in and around an estimated area of 7.9 lakh sq km. Now, its habitat has shrunk by almost a half. After 2001, their sightings were reported only from three states — Rajasthan (western India), Gujarat (western India), and Madhya Pradesh (central India).

“Earlier caracals were densely populated in the Sariska Tiger Reserve in Rajasthan, then they just vanished. There is no specific reason behind them being endangered. Poaching can be one of the reasons, but co-predators like tigers and leopards have also played a role in decreasing the count of the species,” said Singh. “Human-animal conflict is not as much a reason as it is with big cats. It is majorly due to the depletion of grasslands that these species are becoming endangered.”

“Caracal is ideally a grassland animal,” Anurag Sharma, chief executive of Tigerwalah, who has worked closely with the forest authorities of Ranthambore, told Zenger News.

“In the past 10-12 years, I have observed that within the protected areas in forests the ‘big cat’ [indicating tigers, lion, etc] population has been increasing. And, there is an inverse proportion between the population of big cats and caracals. So, these grassland animals started declining,” said Sharma, who has spent about 17 years tracking tigers and other wildlife animals at the national parks of India.

Habitat destruction (agriculture and desertification) is likely to be the main threat in the Asian part of the animal’s range, according to the International Union for Conservation of Nature. Another study states that approximately, 200,000 kilometers (124,274 miles) of grassland and shrubland, along with 260,000 kilometers (161,556 miles) of forests is estimated to have been converted for agricultural use from 1880 to 2010.

“From the very beginning, these species stayed confined to specific areas and didn’t migrate much. Hence, due to depletion in its habitat, their numbers are decreasing,” said Singh.

Caracal is listed as an endangered species in Jordan; critically endangered in Pakistan and Morocco; believed to be on the verge of extinction in many parts of North Africa; and has vanished in Kuwait and parts of Turkmenistan, as per the International Union for Conservation of Nature.

“Because the declines are highly local and none cause a significant range loss about its global population, the species is considered as least concern,” states the International Union.

“Caracal is the fourth mammal under India’s Schedule I of the Wildlife Protection Act, 1972, and is granted the same level of protection as tigers, markhors, elephants, etc.,” Kartick Satyanarayan, chief executive of Wildlife SOS, told Zenger News.

“Despite the law of the land, their population is threatened,” said Satyanarayan, who is a member of the International Union for Conservation of Nature Bear Specialist Group. “So, this move to include caracals in a higher category of protection is welcomed.”

The standing committee of the National Board of Wildlife has decided to take up conservation efforts with financial support under the Integrated Development of Wildlife Habitats, a centrally sponsored scheme.

“A lot of research is yet to be done to say if captive breeding will be suitable for the preservation of caracals. It’s too early to say anything about that,” said Meena.

“Captive breeding is dangerous, hence, if the authorities are unable to increase the count of the species by all other means, then it may be the last resort,” said Singh. “One important reason for the plight of caracals is sheer negligence on the part of humans. We never gave attention to this species and now that they are becoming endangered, we are wondering why?”