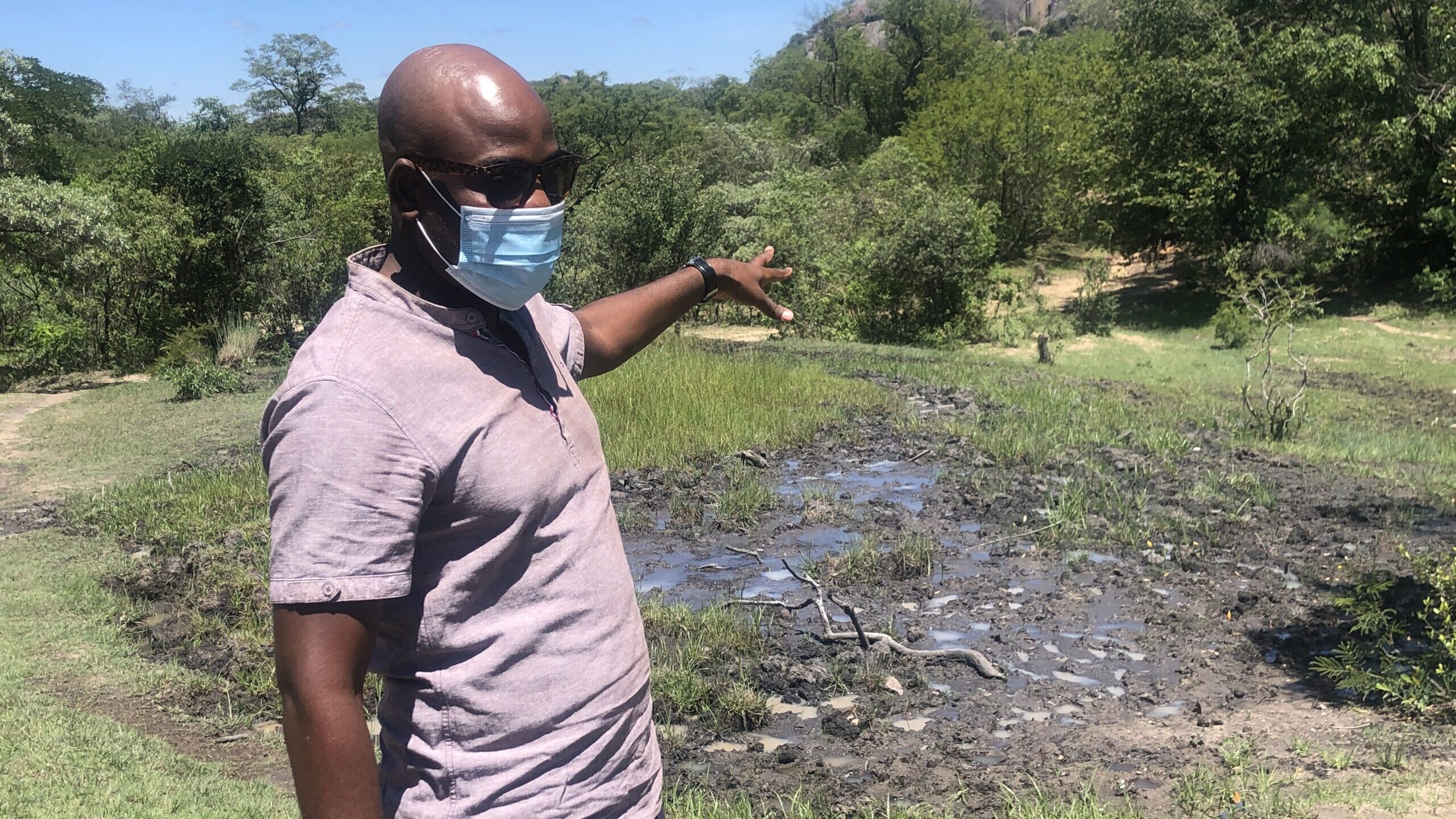 Innocent Katsande, coordinator of knowledge management in the region for Practical Action, points at a wetland formed from the underground water recharge in Matobo district, Zimbabwe. (Lungelo Ndhlovu/Zenger News)

BULAWAYO, Zimbabwe — As demand for secure water increases, a team of international hydrogeologists has developed the first open-access map of the rate of groundwater recharge in Africa. They believe it will help to sustain water supplies on the continent.

“Recharge rates are a key component for assessing groundwater development potential, but have not been mapped across Africa, other than from global models,” the researchers state in their study. “Here, we quantify long-term average distributed groundwater recharge rates across Africa for the period 1970–2019 from 134 ground-based estimates and upscaled statistically.”

“Recent research showed that at the continental level, there was little evidence of widespread declining groundwater levels. However, it is locally a problem in some cities,” he said. “Groundwater will be part of the solution to react to this water scarcity. If you look at the maps in our recent paper, they list countries often thought of as water scarce, which do have natural groundwater recharge.”

“Reserves of groundwater were replenished at rates that could help to protect communities against the damaging effects of climate change and sustain the need for drinking water,” he said. “However, this management will be critical.”

MacDonald said that as rainfall and surface water become less reliable, “more people are using groundwater. It is a much more reliable source during drought. Therefore, developing groundwater is often seen as a solution to water security issues arising from climate change.”

MacDonald said those efforts are not surprising; people know the benefit of groundwater.

“In many cities, where municipal water can be uncertain, households drill their own boreholes, or dig their own wells as insurance against drought or a break in their supply,” he said.

Ncube said that since the drought of 1992, the central government, through the Zimbabwe National Water Authority, drilled 77 boreholes at Nyamandlovu to tap into local aquifers for water security.

“I call upon residents to guard jealously these boreholes that are being drilled, so that at the end of the day, the city of Bulawayo is a good steward to any investment made by partners,” he said.

The city receives an additional 20 megaliters (5.3 gallons) of water per day from these underground water projects, augmenting supply from the dams.

Mads Lindegaard, country director for the DanChurchAid alliance, partners with the city of Bulawayo on water projects. During droughts, the city needs to use every water resource available. “We need to do surface water like dams, but we also need to do sustainable harvest of groundwater … .”

Other development organizations, including Practical Action, also tap into underground water in dry and arid areas by drilling boreholes that rely on solar energy. In this way, water is provided for marginalized communities.

“Renewable energy empowering women farmers’ projects in Matobo district, which is really focusing on agricultural productivity through solar water pumping, is primarily to power irrigation,” said Innocent Katsande, regional coordinator of knowledge management for Practical Action. “In this region it’s dry, and the biggest challenge for farmers is being able to access water. So, what this project does is use the power of solar to power small gardens.”

MacDonald said that some scientific studies appear to suggest that climate change may actually increase groundwater recharge, particularly in semi-arid areas. Though underground water resources have the ability to replenish, he cautions that groundwater could be threatened by urbanization.

“Very high groundwater abstraction in urban areas has led to declining groundwater levels in some African cities, such as Addis Ababa and Nairobi, or saline intrusion into aquifers, such as in Lagos,” he said.

Urbanization, “can lead to the contamination of groundwater caused by activities on the surface or from onsite sanitation leaks that end up into the shallow groundwater,” MacDonald said.