Florida Woman Sues Town That Fined Her $165,000 For Parking On Her Own Lawn 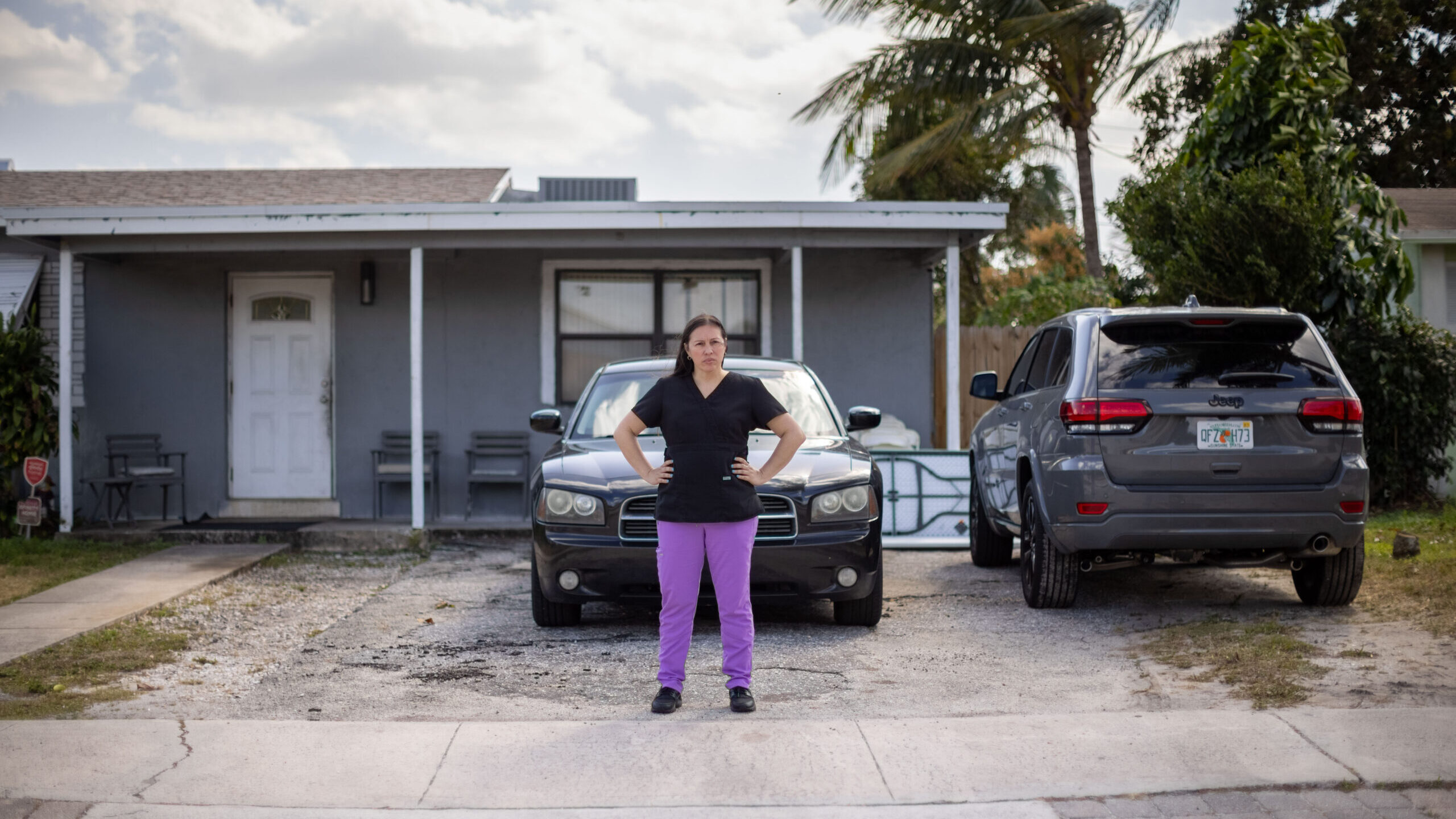 Sandy Martinez has filed a lawsuit against the town of Lantana, which has fined her over $165,000 for parking on her own grass and other minor infractions. (Courtesy of The Institute For Justice)

LANTANA, Fla. — A resident of Lantana, Florida, is suing the city over more than $165,000 in fines she received for code violations, including parking on the grass on her own property.

In her lawsuit, Zenaida “Sandy” Martinez claims the code enforcement fines she owes the city of Lantana are unconstitutional and violate the Excessive Fines Clause of the Florida Constitution.

Martinez bought her house in Lantana in 2004 and lives there with her mother, sister and three children — four of whom are drivers. With four cars in the driveway, some vehicles’ wheels extended beyond the driveway and onto the adjoining grass.

Parking on one’s front yard is illegal in Lantana. The city’s code enforcement department indicates this is one of the most common violations it issues fines for.

“It’s very stressful,” Martinez told Zenger News. “Sometime, I sit and think, if I ever wanted to sell the house or something happened to me, my kids wouldn’t have it. It’s just sad. I can’t believe it — I’m pretty shocked.”

Martinez began receiving fines in May 2019 for parking on her grass, but said she didn’t know the fines were still accruing through May 2020. After receiving the initial fine for parking on the grass, she and her family members stopped parking on it, save for a few occasions.

Martinez’s attorney said the fines are outrageous and indicated they may amount to code-enforcement abuses.

“The Florida Supreme Court needs to take a look at this case,” Ari Bargil, an attorney at the Institute for Justice who is representing Martinez, told Zenger. “These fines are outrageous and disproportionate to the offenses for which they are assessed.”

“What we’re seeing is code-enforcement abuses run amok,” Bargil said. Abuses will continue to occur when there are no limitations on fines or code enforcement, he said.

Martinez told Zenger she went to court and had to pay $50 for each fine to see if she could get a reduction. The town offered to reduce her fines to $25,000 in September 2020, and she was required to pay within three months.

She said the $25,000 reduction was “for parking on my property that I own.” She did not have the money and said: “Even if I did have it, I wouldn’t give it to them.”

“They shouldn’t be able to tell me how to park on my property,” she said.

She said she is not just fighting for herself but others throughout Florida who are experiencing the same issue.

The city fined Martinez $250 per day for violating an ordinance that regulates how a resident can park in their own driveway — totaling more than $100,000. In addition, she had two other code violations — cracks in her driveway — with fines totaled $16,125, and fines for a damaged fence, which amounted to $47,375.

The lawsuit states that violations continued to be imposed even if the violation is rectified by the homeowner, and the owner is responsible for calling the city’s code-enforcement office for a re-inspection.

“Once a fine has been imposed, the City presumes that a property remains in a state of noncompliance until a homeowner requests a compliance check and a code-enforcement officer confirms the violation has been remedied,” the lawsuit states. “If a property owner forgets or otherwise fails to request a compliance check, daily fines will continue to accrue — even if the property has been brought into compliance.”

The Lantana Code Enforcement Department, one of the defendants in the lawsuit, said it had no comment when reached by phone.

The town’s development services director, Nicole Dritz, did not respond to several requests for comment.

A review of Lantana’s budgets for the past three years by Zenger shows hundreds of thousands of dollars in revenue from code-violation fines under this budget line item: “Fines — Local Ordinance Violation.”

When asked about revenue from fines, Bargil said: “This is part of the problem.” He said many municipalities, “view code enforcement as a revenue generator.”Some municipalities generate millions of dollars in revenue from code violations, he pointed out.

“As long as they look at it as a way to raise money, it’s only going to get worse,” Bargil said.

Charles W. Thompson Jr., general counsel and executive director of the International Municipal Lawyers Association, told Zenger he doubts he “would have sought to recover anywhere near the amounts discussed in the case against an offender for these violations.”

The issue of fines and fees applied without consideration of the violator’s wealth is a major issue in society today, he said.

“Some municipalities are looking at attempting to adopt progressive fines that parallel a person’s ability to pay and the pain of the fine as a deterrent,” said Thompson. “Until society determines that we should live without laws, there will be penalties for violating the laws that do exist.”

He said it’s still unclear “how those fines can be applied to prevent people from ignoring the laws that exist, applying them fairly across wealth strata and achieving benefits to public health, safety and welfare.”

Still, Thompson said “all of us live in a society governed by people we elect to pass laws that should be designed to protect health, safety and welfare.”

If a federal, state or local government passes a law, they must be abided, and people must pay the consequences for violating them until the laws are changed, Thompson said.

Martinez filed her suit on Feb. 25, and Lantana has up to 20 days after that date to respond, Bargil said.

«Previous Post
VIDEO: Drug Dopes: Dealers Opened Door To Cops They Mistook For Customers»Next Post
Build Back Batter: How Giant Batteries Could Be The Answer To Extreme Weather Power Failures