A pair of Kenyans who suffer seizures must also deal with the mistaken belief that they are possessed.
By Sharon Wawira Kiburi March 4, 2021
Facebook
Twitter
Linkedin
Email 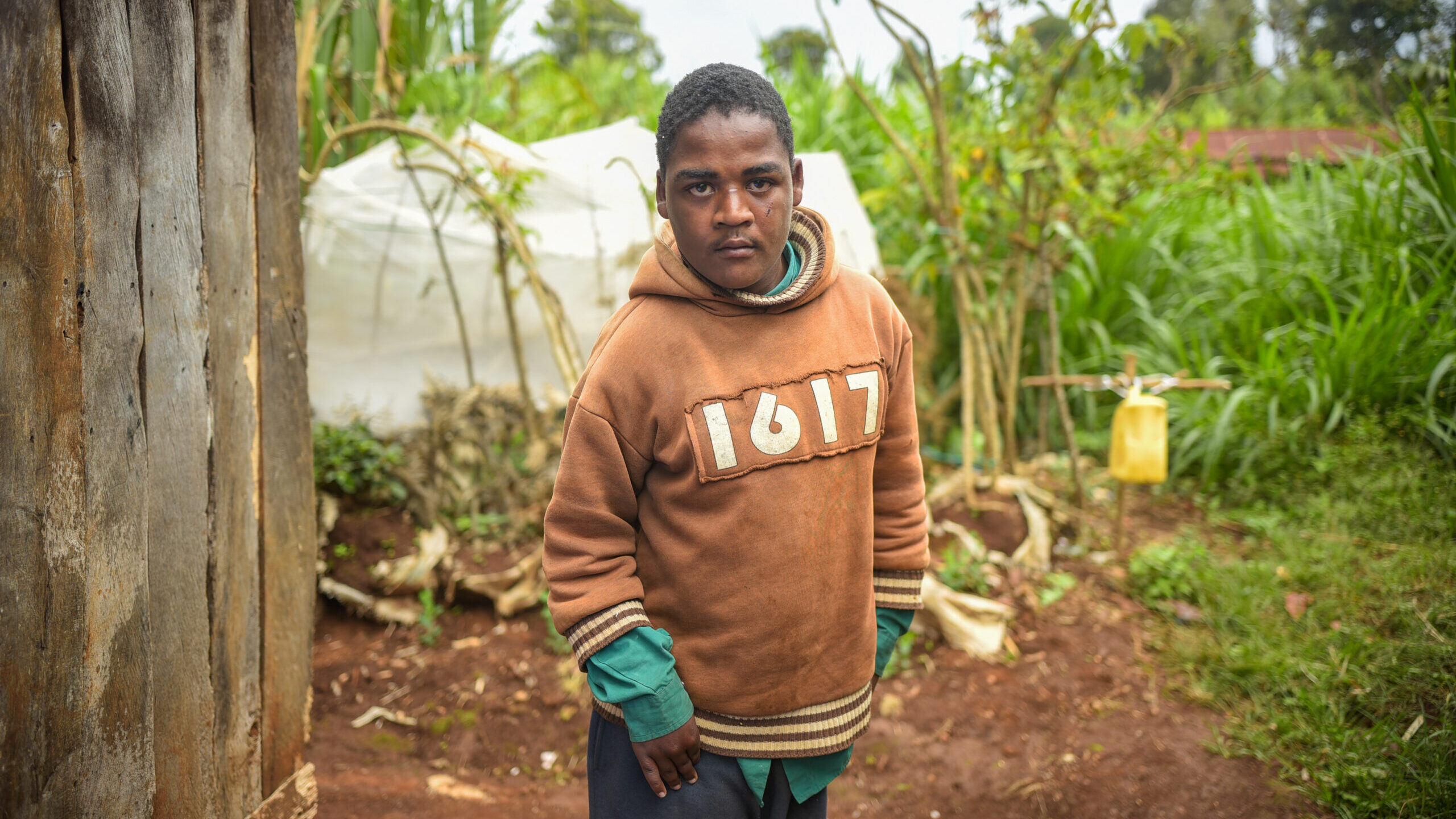 Ian Muriuki, 15, cannot attend school, but he helps out on his family's farms in Embu County, Kenya. (Sharon Wawira Kiburi)

NAIROBI, Kenya — Fifteen-year-old Ian Muriuki has bright brown eyes and the curious look of an innocent child gazing into your soul, trying to understand the kind of person you are. He sits quietly, looking at an interviewer who asks a question, and then looking back at his father in anticipation of what his father will say.

Ian speaks in a low tone, but most of the time chooses not to utter a word. He has suffered epileptic seizures since he was a baby.

Also plagued by seizures is 35-year-old Jerusha Muthoni. “People would say that I was bewitched whenever I would fall and go into a fit, but with time, they learned better and would help me when it happened,” she said.

In Embu County, Kenya, where Ian and Jerusha live, when a person has seizures, it is seen as a sign of supernatural possession, said Purity Kajuju, manager of noncommunicable diseases in the county for Medecins Sans Frontieres (also known as Doctors Without Borders).

“Epilepsy is a chronic disorder, the hallmark of which is recurrent, unprovoked seizures,” the Epilepsy Foundation states. “The seizures in epilepsy may be related to a brain injury or a family tendency, but often the cause is completely unknown.”

Seizures may be triggered by such things as intense light, loud sound, hunger, menstruation, alcohol, trauma or head injury.

While a number of drugs are used to treat epilepsy, Kajuju cautions against the use of herbal treatments, which can cause problems “if mixed with conventional medicine.”

“Epilepsy is not mental health,” said Kajuju. “It occurs when wrong messages sent to the brain cause convulsions. It cannot, therefore, be treated with psychiatrists’ medication.”

In Embu County, the management and treatment of epilepsy has improved, thanks to the training of health workers and community health volunteers in local hospitals, combined with patient group support activities.

Ian’s father, John Mureithi, said he and his wife noticed something wasn’t right when their son was still a baby.

“When they are still very young, you may not know [something is wrong]. We only came to notice when he would try walking, crawling — the move would appear to be in a slithering manner,” his father said.

Ian’s mother suspects that her son’s convulsions may be traced to a time when he fell sick as a baby.

“His face changed color, and to date, the scar is evident,” his father said. “After an injection, it became black, and he started having a deformation in the right hand and leg.

“When he started growing and started going to school, he was very sharp. He went up to class three, but his cognitive capacity couldn’t progress past there. I took him back to nursery school … but he kept deteriorating. He couldn’t grasp the concepts taught in class. The teachers told me to take him to a special school. … I did not even know where to begin. So, he’s been at home since 2019.

“While in school, Ian would get frequent epileptic seizures, and I would receive a call every single day to pick him up. … The other kids would often run away from him.”

Ian is strong, and his mother says he does some minor chores around the house, including laundry, cleaning and even cooking sometimes. He also assists on their farm, where they grow maize, passion fruit, tea and feed for cattle.

Managing Ian’s condition has meant that someone has to watch him at all times.

“I can’t leave him alone, lest he harms himself,” his father said. “We keep him away from the fire as that is one of the triggers of his seizures.”

Drugs to treat his condition are also costly and not always readily available.

Ian gets sad sometimes when he sees his brother going to school, and he can’t go. “I feel bad,” he said.

Jerusha was diagnosed with epilepsy in 2002, when she suffered a seizure at home. She had just finished her primary school education and was waiting to start secondary school. She would have seizures up to three times a day, sometimes even while sleeping.

“She would shout before going into a fit, and we would wake up,” said her mother, Edith Muceru Njuki.

Jerusha has a warm smile — without teeth, as they were removed to prevent her from biting herself when she suffered a seizure.

“I would chew my tongue when I got a seizure, so my mother would put sticks or spoons in my mouth to protect me. But with time we decided to have the teeth surgically removed,” Jerusha said.

Jerusha had to travel to a health center in the distant town of Siakago each month to get the drugs she needed, a journey her mother dreaded.

“It was very far and quite an expensive trip to make. What’s worse is that she would often get seizures on our way to the hospital. I would get scared and worried, but we’d wait there until it fizzles out, then continue with our journey,” her mother said.

“With time, we were transferred to Kiritiri, which was still too far. When Medecins Sans Frontieres came to Kabuguri [village] here, we got transferred once again, and now it’s effortless for us to get there. We walk,” her mother said.

When it was discovered that Jerusha was pregnant, it raised many questions. “No one knew she was pregnant or even how she got that way, owing to her condition until it started showing, but even then, she couldn’t tell how or when it happened at first,” said her mother. “We, however, later found out who the father was, but he’s an old man, and we couldn’t approach him or make her stay with him.”

Jerusha’s mother said her major challenge is providing for them, a situation made even more difficult owing to her status as a peasant farmer who lives as a squatter on land not her own.

“She is like a child. I can’t leave her at any one time,” her mother said. “Despite her condition, she’s still the child that God gave me, and I have to take care of her.”