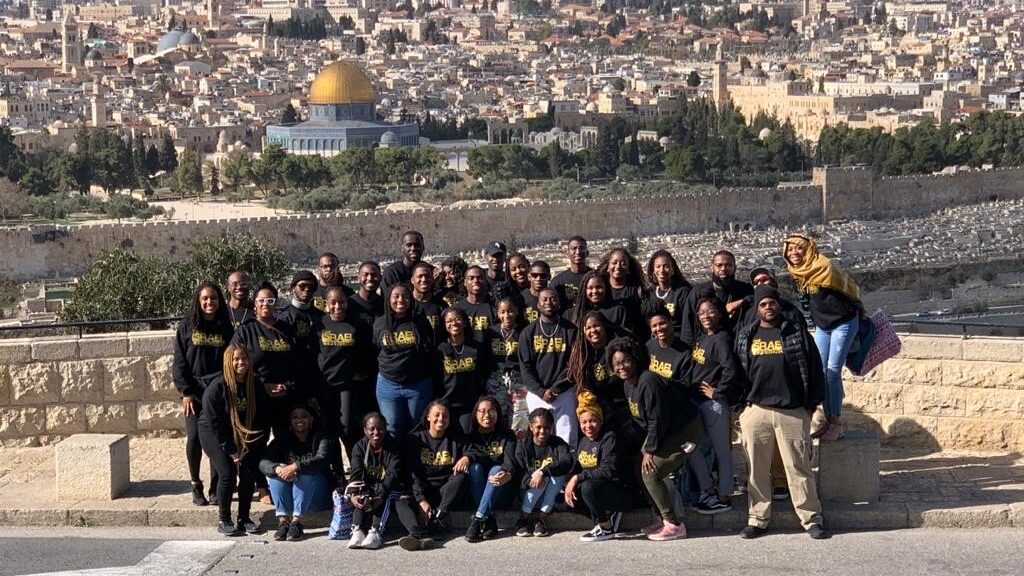 Marvel Joseph was still a senior at Florida Atlantic University when he joined a group of students from historically black colleges and universities (HBCUs) on a 2019 trip to Israel with the Maccabee Task Force (MTF).

The trip left a lasting impact.

Half a year later, the South Florida native landed a job with the Task Force as a coalition coordinator to help other HBCU students recognize the value of Israel.

Does the hiring of Joseph — who is Black and not Jewish — seems unconventional for an organization that promotes Israel and dispels anti-Semitism? It’s not. Welcome to the new world of establishing and strengthening alliances.

After spending time in Israel on an immersive and instructive trip, college students are far less inclined to accept the boycott, divest and sanction (BDS) and anti-Israel narrative the MTF is working to combat, say its leaders.

“I work with HBCUs on creating academic experiences to engage students on the importance of Israel and the historic Black-Jewish relationship,” Joseph told Zenger News. “I think for both the Jewish and the Black community, we don’t really think about what’s happening to other people. We don’t think other communities can help each other combat their own form of hate.”

Joseph’s work involves establishing programs, introductory lectures and even a book club, all with an eye for exposing students to new ideas and perspectives. Student leaders also interact with pro-Israel members of their community. Now, students who took the MTF trip with Joseph are reaching out to others on campus, encouraging them to take a similar journey once the coronavirus pandemic has subsided, and it’s safe to travel.

To a certain degree, Joseph’s coalition building is a natural extension of the work the MTF was already doing, according to MTF Executive Director David Brog. Those who hold anti-Israel beliefs have been able to gain a foothold with Black students by convincing them Israel is an apartheid state.

“It’s been critical that pro-Israel students push back against this narrative,” said Brog. “As part of our thinking in doing a better job of reaching out to Black students in America, we thought: ‘Let’s go to what is the heart of so much Black scholarship and the source of a very significant percentage of Black leaders.’ And that’s HBCUs.”

Not only is Maccabee Task Force looking to establish new bonds, the hope is to rebuild or strengthen existing alliances.

Jews and Blacks both have histories of adversity and tragedy — which has brought the communities together in the past to mutually work toward tolerance and civil rights. Those relationships can — and should — be reestablished, Brog said.

As a boy, Brog hung around the pharmacy operated by his uncles in a Jewish neighborhood in north Philadelphia that gradually became a Black neighborhood. While there was tension between the two communities, that’s not what lingers in his memory.

“I also saw the deep relationships and the connections that formed,” Brog said. “That’s what I prefer to focus on.”

Similarly, as the son of two Haitian immigrants, Joseph remembers members of the Jewish community being among the first groups to provide aid after the devastating earthquake of 2010. Joseph later took several trips to Israel and attended a retreat hosted by the American Israel Public Affairs Committee (AIPAC).

“I learned about some of the threats that Israel faced, both in the region and here in the U.S. with calls of boycott, divest and sanction (BDS) and anti-Semitic attacks,” Joseph said “When you grow up in South Florida, you don’t really think there are people in the world who don’t see eye to eye with the Jewish community. When I got to college, I had the opportunity to learn more about how I could help this community that I grew up around, that I valued and cared about.”

The HBCU trip to Israel in December 2019 was the last MTF trip sponsored before the COVID-19 pandemic. The visit was the first excursion out of the country for Mya Schofield, student body president at Benedict College in South Carolina.

“We were told to have an open mind, to be open to different ideas and to things that we hadn’t personally experienced,” said Schofield, a senior. “I went in with a clean mindset about Israel, the culture and the environment, and I am so grateful for the opportunity and the relationship I now have with the Maccabee Task Force.”

Schofield vividly remembers visiting a shelter for migrant African women in Tel Aviv and leaving messages at the Western Wall in Jerusalem. The group had knowledgeable tour guides and leaders who held discussions at the end of each day. Since returning, Schofield has worked with Joseph to establish Zoom seminars with Israeli speakers to introduce other Benedict students to Israeli life and culture.

Brog and Joseph acknowledge the MTF’s ability to do outreach is limited by COVID-19 restrictions, and they expect the work with HBCUs to continue to grow once the world reopens.

“It’s easier to lie about Israel when you don’t know anything about Israel,” said Brog. “For us, the greatest remedy is the truth. We bring students to Israel and let them see it for themselves — unfiltered.”