What Do Ted Cruz And Bernie Sanders Have In Common? They’re Popular Piñatas

Wackable caricatures of the American lawmakers a big hit at a Dallas party supply store. 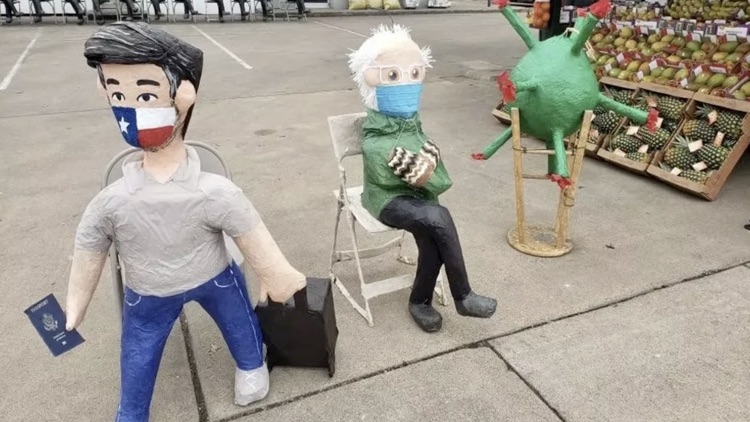 The owner of the family business ABC Party HQ in Dallas came up with the idea of making Cruz-shaped piñatas. They feature Cruz, pulling a rolling suitcase, wearing a mask bearing the Texas flag and carrying a passport, just as he appeared at Cancun’s International Airport before boarding his flight back.

“Suddenly, as people say, the piñata went viral, and we are receiving calls from all over the country, even from Hawaii,” De La Fuente said.

ABC Party HQ’s fame is now worldwide. A German media outlet has already filmed the now-popular piñata of the Republican Cruz, which costs $100.

For the Mexican businessman, the piñata’s success came at an opportune time. ABC Party HQ remained closed for several days due to the historic winter storm that paralyzed Texas, causing the deaths of more than 20 people. Also, the coronavirus pandemic had impacted the piñata and party supply store for the past year.

“We are going through a difficult time due to the storm and the pandemic, and we have to find different ways to make ends meet,” said De la Fuente, who opened his store in 1989.

“The Bernie Sanders-shaped piñata was a success too,” said De La Fuente.

Piñatas are common at Mexican parties, and the country’s government says that a piñata is an “internationally recognized symbol of Mexican culture.”

Originally made with clay pots, piñatas are traditional in Christmas. At first, they had the shape of a star. Mexicans fill them with seasonal fruits, including tejocote, jicama, lime, sugar cane and mandarin, as well as peanuts and sweets.

At parties, children and sometimes adults, blindfolded, try to hit the piñata hung in front of them with a stick. If they break it, what is inside falls out and everyone runs for their prize.

Today, piñatas have transcended Mexican borders. They are now typically made of cardboard and can have different shapes, often something or someone in fashion or trending in the news.

“I am aware of the news, of what is happening around the world,” said ABC’s owner, explaining that he usually looks for topics that allow him “to take something positive from something negative,” something that makes people laugh.

“That’s what the piñata is about, laughing,” he said.

(Translated and edited by Gabriela Olmos. Edited by Matthew Hall.)

«Previous Post
From The Streets To The Stage, The History Of Rap In Mexico»Next Post
Endangered Reptiles Replace Red Meat During Lent In Colombia